NEWS FROM THE BREWERY! Head brewer, MICHAEL GAETZ, reports our seasonally available HARBINGER MAIBOCK, PEACH PASSION FRUIT BLONDE ALE, and TWO SONS MILK STOUT are now on tap. A batch of KAI’S MUNICH HELLES is also currently working its way through the brewery. HONEY THISTLE WIT has made its triumphant return! Our guest tap is currently pouring the Idaho 7 Single Hop Pale Ale from Swift Current’s Black Bridge Brewery. Next up is the Rumple Plum Skin Plum Sour from Regina’s Malty National Brewing. Following that the Nokomis Craft Ales Summer Kettle Sour will be flowing. Our premium wines for the month of July are from the VILLA TERESA WINERY in Italy. The red is their ORGANIC MERLOT and the white is an ORGANIC PINOT GRIGIO. Both are $8.95 for a glass and $24.95 for a half litre. 650 ml bottles of our number one selling DUNGARVON IRISH RED ALE are now available at the Rochdale, Emerald Park and brand new Southland Sobeys Liquor stores! 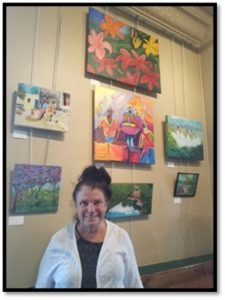 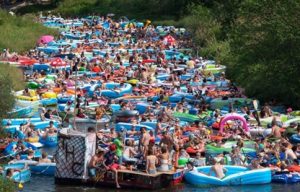 TIME OUT A few minutes before the church services started, the congregation was sitting in their pews and talking. Suddenly, Satan appeared at the front of the church. Everyone started screaming and running for the back entrance, trampling each other in a frantic effort to get away from evil incarnate. Soon the church was empty except for one elderly gentleman who sat calmly in his pew without moving, seemingly oblivious to the fact that God's ultimate enemy was in his presence. So Satan walked up to the man and said, 'Do you know who I am?' The man replied, 'Yep, sure do.' ‘Aren't you afraid of me?' Satan asked. 'Nope, sure ain't.' said the man. ‘Don't you realize I can kill you with one word?' asked Satan. ‘Don't doubt it for a minute’, returned the old man, in an even tone. 'Did you know that I can cause you profound, horrifying agony for all eternity?' persisted Satan. ‘Yep’, was the calm reply. 'And you're still not afraid?' asked Satan. 'Nope’, said the old man. More than a little perturbed, Satan asked, ' Why aren't you afraid of me?' The man calmly replied, 'Been married to your sister for 48 years.'