NEWS FROM THE BREWERY! Head brewer, MICHAEL GAETZ, reports our seasonally available HARBINGER MAIBOCK, PEACH PASSION FRUIT BLONDE ALE, and TWO SONS MILK STOUT are now on tap. A batch of  KAI’S MUNICH HELLES is also currently working its way through the brewery. HONEY THISTLE WIT has made its triumphant return! Our guest tap is currently pouring the Crossmount Pina Loca pineapple apple cider from Saskatoon. Next up is the Idaho 7 Single Hop Pale Ale from Swift Current’s Black Bridge Brewery. This will be followed by a Plum Sour from Regina’s Malty National Brewing. Our premium wines for the month of July are from the VILLA TERESA WINERY in Italy. The red is their ORGANIC MERLOT and the white is an ORGANIC PINOT GRIGIO. Both are $8.95 for a glass and $24.95 for a half litre. 650 ml bottles of our number one selling DUNGARVON IRISH RED ALE are now available at the Rochdale, Emerald Park and brand new Southland Sobeys Liquor stores!

July 6: FIRST FIRKIN FRIDAY. Enjoy the pomp and circumstance of this long standing Bushwakker monthly tradition. A piper from the Regina Police Services Pipes and Drums leads a keg of special brew in a procession throughout the brewpub. A guest volunteer is selected to maul affectionately referred to as The Mighty Firkin Wakker, and attempt to tap the firkin in one mighty blow. This month Bushwakker head brewer will present a Grand Marnier-infused Orangerine Fruit Beer. The delicious beer and suds-soaking experience takes place at 5:30 PM. JULY 8: CLOSED FOR RENOVATIONS. Our bar area needs some TLC. JULY 9: CLOSED FOR RENOVATIONS. Two whole days of TLC! We apologize for any inconvenience. 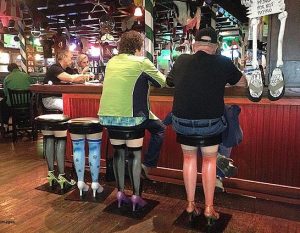 We will be closed for two days to conduct some bar renovations. This is not the direction we plan to take!   July 11: Wednesday Night Folk. A NEW GROUND. Fiddle and guitar Celtic Folk duo makes their Bushwakker debut. 8:00 PM. July 16: Monday Night Jazz & Blues. SYNCHRONICITY JAZZ.  Talented duo delivers jazz ballads, Latin jazz and blues performed on flute & guitar. 8:00 PM. July 18: Wednesday Night Folk.  SHAYNE LAZAROWICH & SABRINA DEMYEN. A unique Regina and Saskatoon artist double bill. 8:00 PM. July 23: Monday Night Jazz & Blues. WHITEBOY SLIM. National award-winning bluesman returns! 8:00 PM. July 25: Wednesday Night Folk. LIV GAINS. Ontario singer/songwriter on a Canadian tour. 8:00 PM. July 28: SASK VS. CALGARY. Stop by before the 7:00 PM kickoff for our gourmet CALGARY BURGER & A PINT special. A great deal for only $18.95. Come “devour” the competition! July 30: Monday Night Jazz & Blues. THE JEFF MERTICK BAND. Soulful veteran bluesman returns with a full backing band. 8:00 PM. Aug. 1: Wednesday Night Folk. BRIAN VOLKE. Former Celtic Clutter frontman returns to Regina for a special homecoming performance. 8:00 PM. Aug. 2: IPA DAY! West Coast IPA versus New England IPA Beer Tasting Event. Join us as IPA fans around the world celebrate what has become the symbolic beer of the entire craft beer movement. Only 50 tickets will be made available to our piney/citrusy and juicy/tropical IPA beer tasting battle. A selection of specialty imported IPAs representative of both hoppy camps will be presented. You will decide which side wins! Our kitchen will also be offering a tasty dining feature incorporating this iconic beer style as an ingredient. Aug. 3: FIRST FIRKIN FRIDAY. Enjoy the pomp and circumstance of this long standing Bushwakker monthly tradition. A piper from the Regina Police Services Pipes and Drums leads a keg of special brew in a procession throughout the brewpub. A guest volunteer is selected to wield the handmade wooden maul affectionately referred to as The Mighty Firkin Wakker, and attempt to tap the firkin in one mighty blow. The delicious beer and suds-soaking experience takes place at 5:30 PM. Aug. 3 – 6: AUGUST LONG WEEKEND KEG EVENT. Receive free coasters, cups, ice and the use of a Bushwakker keg chiller tub and pump/faucet when you order any one of our four sizes of kegs for a long weekend. Place your order at least 24 hours in advance to avoid disappointment. Aug. 6: OPEN NOON TO NINE for the holiday! Happy Saskatchewan Day!

Canada's Definition of Beer Could be Changing

Alterations to national beer standards being considered by federal government The Canadian Press Your beer is about to undergo a government makeover. Federal officials are proposing changes to national beer standards that would widen the number of ingredients permitted in a pint and force brewers to list every ingredient on a can or bottle. Even the Canadian definition of "beer" would change. The changes would mark a major overhaul of beer standards introduced more than 30 years ago, but they must first go through public consultations quietly launched days ago. Beer aficionados who have closely watched the industry for years say the proposals would help regulations catch up with an explosion in styles and types of beers. Between 1990 and 2017, the number of Canadian breweries jumped to more than 750 from 62, while the number of beer brands has risen to more than 7,000 from about 400. Stephen Beaumont, co-author of The World Atlas of Beer, said there are any number of beers on the market today that violate the existing standards, either through ingredients or fermentation methods. "This is all stuff that is going on, and the regulations just haven't been there to catch up to all of it," Beaumont said. No longer would beer be required to "possess the aroma, taste and character commonly attributed to beer" or be categorized into different styles or types like ale, stout, porter and malt liquor. Instead, officials are proposing to set limits on sugar content and simplify language around the use of additives that would set define what is a beer. Added to that would a wider list of herbs and spices among other ingredients that can be used in the brewing process. "We're not going to be excluding anything that is currently defined as a beer, but it does provide … criteria for brewers to work with," said Luke Harford, president of Beer Canada, a national trade association that represents more than 50 companies that make about 90 per cent of Canada's beer. "It allows them to hold on to what is traditionally thought of as a beer, while at the same time allowing them to innovate within that category." Brewers could use different fruit, lavender or coriander for instance, providing options to smaller operations which want to test something new in the marketplace, said Dirk Bendiak, technical adviser for Ontario Craft Brewers. He said the proposed regulations won't stifle creativity. "If anything, they are there to make it more creative for different people." Lastly, beer would be subject to stricter labelling rules, which would require a longer list of ingredients on bottles and cans, so the approximately 1.75 million Canadians with food allergies, celiac disease and sulphite sensitivity can better decide what they want to drink. A government analysis says the changes would allow for innovation in the beer industry, but said some small craft breweries could find meeting the new requirements difficult and some drinks may no longer be considered or marketed as beer. "The most important thing you could do if you're a craft brewer would be to get a handle on how to add ingredients these lists," said Jordan St. John, co-author of The Ontario Craft Beer Guide. "The labelling component and making sure people understand what they're getting — that's really beneficial for the consumer. It's just that getting there is going to be a bit of a pain." 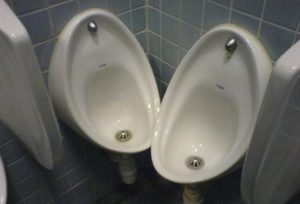 Lots of advance planning should result in a smooth and efficient bar renovation on July 8th and 9th.

Two Irish nuns have just arrived in the USA by boat and one says to the other, "I hear that the people in this country actually eat dogs." "Odd," her companion replies, "but if we shall live in America, we might as well do as the Americans do." Nodding emphatically, the mother superior points to a hot dog vendor and they both walk towards the cart. "Two dogs, please," says one. The vendor is only too pleased to oblige and he wraps both hot dogs in foil and hands them over the counter. Excited, the nuns hurry over to a bench and begin to unwrap their "dogs." The mother superior is first to open hers. She begins to blush and then, staring at it for a moment, leans over to the other nun and whispers ...cautiously: "What part did you get?