NEWS FROM THE BREWERY! Head brewer, MICHAEL GAETZ, reports our seasonally available CHINOOK ESB, "ORANGERINE" FRUIT BEER, BARON BOCK and TWO SONS MILK STOUT are now on tap. A batch of HARBINGER MAIBOCK and KAI’S MUNICH HELLES are also currently working their way through the brewery. HONEY THISTLE WIT will also soon make a triumphant return! Our guest tap is currently pouring a Dark Sour from 9 Mile Legacy Brewing. Next up is the Crossmount Pina Loca pineapple apple cider from Saskatoon. This will be followed by the Idaho 7 Single Hop Pale Ale from Swift Current’s Black Bridge Brewery. Our premium wines for the month of June are from the Trapiche Winery in Argentina. The red is their PURE BLACK MALBEC and the white is a RESERVE PINOT GRIGIO. Both are $7.95 for a glass and $22.95 for a half litre. 650 ml bottles of our number one selling DUNGARVON IRISH RED ALE are now available at the Rochdale, Emerald Park and brand new Southland Sobeys Liquor stores! Our SODBUSTER BROWN ALE is now available for growler fills at the Quance Street SLGA store in Regina. Three other fine Saskatchewan craft beers are also available. Enjoy them for a limited time! 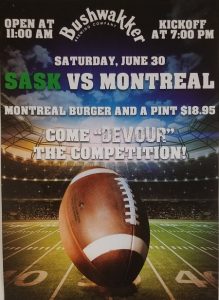 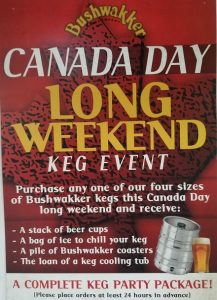 The Saskatchewan government is celebrating Alberta’s loss of an appeal over a beer policy that favoured local brewers.  D.C. Fraser, Regina Leader-Post The Saskatchewan government is celebrating Alberta’s loss of an appeal over a beer policy that favoured local brewers. But craft beer makers in Saskatchewan had mixed reviews on the decision. At issue was Alberta’s Small Brewers Development Program, which Calgary-based beer importer Artisan Ales — supported by Saskatchewan in the dispute — contended was operating in contrary to free trade obligations. Introduced in 2015, the program essentially put higher markups on beers produced outside of Alberta. It was changed in 2016, applying a higher mark up on beer brewed anywhere; but to off-set that locally, a grant to Alberta brewers was made available. A trade panel, governed by the federal Agreement on Internal Trade, ruled last August that the program was in violation of that agreement but the NDP Alberta government appealed the decision. Now, a three-person panel has found the program, “distorts the playing field and, as such, results in ‘less favourable treatment’ of beer produced in other provinces.” Mark Heise, vice-president and brewmaster of Regina-based Rebellion Brewing, said he found it interesting how the decision is, “helping to shape how Canada would like to see inter-provincial trade, not just with beer, but with all products.” He noted “unprecedented growth” in Alberta’s craft brewery market as a result of the grant offered by the provincial government; but said, “for the beer drinker in Alberta, they’re going to get a lot of the choice that they had previously enjoyed (before the policy).” As a Saskatchewan only brewery, he said it would not affect Rebellion’s business. Swift Current-based Black Bridge Brewery part-owner Cari Stenson said if Alberta takes away its craft brewery grant, it will be tough for brewers who had planned on using that money for buying new equipment. “From a small-business brewery in Saskatchewan, I feel like it’s going to be a bit of a shock for a lot of the breweries in Alberta,” she said, noting Black Bridge does not have high sale numbers in Alberta and so for the company the decision is not a “huge deal for our business.” In a statement, Saskatchewan Trade and Export Development Minister Jeremy Harrison called on the Alberta government to immediately comply, “ensuring that brewers from our province and the rest of Canada can compete fairly with Alberta-based brewers.” Alberta’s Economic Development Minister Deron Bilous said in January the province would “honour the ruling” of the panel. On Monday he said Alberta “will be modifying our program” and expressed disappointment with the ruling, which allows the province six months to comply before potentially facing fines. Saskatchewan played a minor role in the dispute’s resolution, but briefly took retaliatory steps against Alberta in December over the policy, when it bizarrely announced a ban on Alberta licence plates from government-funded highway and infrastructure job sites. The Saskatchewan government eventually backed away from that move. Only the Saskatchewan Heavy Construction Association supported the province’s claim there were concerns over Saskatchewan plates being banned in Alberta. No proof or further details about a similar ban that Saskatchewan’s government said was in place in Alberta were provided by the province or industry association.

- I want someone to look at me the way I look at beer – Ron Rodgers - You can't be a real country unless you have a beer and an airline - it helps if you have some kind of a football team, or some nuclear weapons, but at the very least you need a beer. - Frank Zappa - Beauty lies in the hands of the beer holder. – Anonymous - Give me a woman who loves beer and I will conquer the world. - Kaiser Wilhelm - Not all chemicals are bad. Without chemicals such as hydrogen and oxygen, for example, there would be no way to make water, a vital ingredient in beer. - Dave Barry - An Irishman is the only man in the world who will step over the bodies of a dozen naked women to get to a bottle of stout. - Unknown - Non-Drinker: a weak person who yields to the temptation of denying himself a pleasure. - Ambrose Bierce - People who drink light 'beer' don't like the taste of beer; they just like to pee a lot. - Capital Brewery - A fine beer may be judged with only one sip, but it's better to be thoroughly sure. - Czech Proverb - Beer: So much more than just a breakfast drink. - Homer Simpson