NEWS FROM THE BREWERY! Head brewer, MICHAEL GAETZ, reports our seasonally available CHINOOK ESB, "ORANGERINE" FRUIT BEER, BARON BOCK and TWO SONS MILK STOUT are now on tap. A batch of HARBINGER MAIBOCK and KAI’S MUNICH HELLES are also currently working their way through the brewery. HONEY THISTLE WIT will also soon make a triumphant return! Our guest tap is currently pouring the Bitter Orange Chocolate Belgian Ale from Saskatoon’s Paddock Wood Brewing. Next up is a Dark Sour from 9 Mile Legacy Brewing. This will be followed by the Crossmount Pina Loca pineapple apple cider from Saskatoon. Our premium wines for the month of June are from the Trapiche Winery in Argentina. The red is their PURE BLACK MALBEC and the white is a RESERVE PINOT GRIGIO. Both are $7.95 for a glass and $22.95 for a half litre. 650 ml bottles of our number one selling DUNGARVON IRISH RED ALE are now available at the Rochdale, Emerald Park and brand new Southland Sobeys Liquor stores! Our SODBUSTER BROWN ALE is now available for growler fills at the Quance Street SLGA store in Regina. Three other fine Saskatchewan craft beers are also available. Enjoy them for a limited time! 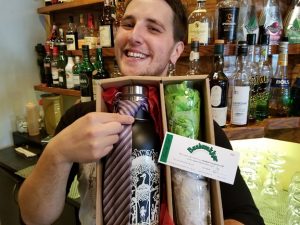 “TIE ONE ON” Father’s Day Growler Gift Boxes are now available. Includes your choice of a glass or stainless steel Bushwakker growler, two Bushwakker pint glasses, a growler fill gift certificate and a swanky tie all presented in a handsome gift box. $40 and $65 each. Limited quantities available. Bushwakker server and bartender, Lexy Desjarlais, has recently joined Bushwakker head brewer, Michael Gaetz, and assistant brewer, Bradley Dalrymple, as the third member of our brewery team.  Her initial responsibilities will be in the bottling area but will undoubtedly increase in scope. Lexy has an unquenchable thirst to learn more about the art of creating Bushwakker beer! Her bio is as follows; Lexy has been a server/bartender at Bushwakker for just over four years. Over that time, her love and appreciation for craft beer has grown into quite the admiration for those who brew it. Being a big supporter of the craft brew push, especially in Saskatchewan, when the opportunity arose to learn to brew, she was excited for the challenge. Lexy is also a talented musician in Regina. Performing live wasn’t always something that she thought she would do, but loving the craft pushed her to showcase what she enjoys most. Since her first show, right here in the brewpub in 2015, she has played at multiple venues throughout town. She has also had the privilege to open for the likes of other talented Saskatchewan musicians including Regina’s own The Dead South, Megan Nash and Terraplane, to name a few. As she embarks on a new journey in life, she is proud to continue to be a part of the Bushwakker family in a new and exciting way. 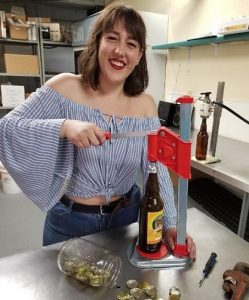 June 15: SASK. VS. TORONTO. The first home game of the regular season kicks off at 7:00 PM. Be sure to enjoy our gourmet TORONTO BURGER & A PINT special for only $18.95 before, during or after the game. Best of luck in 2018 Riders! June 18: Monday Night Jazz & Blues. ‘ROUND MIDNIGHT. Veteran Regina act plays popular jazz and adult contemporary tunes. 8:00 PM. June 20: Wednesday Night Folk. BRADFORD. Talented duo featuring Brad Papp and Mark Radford. 8:00 PM. June 25: Monday Night Jazz & Blues. SUFFICIENT CONDITION. With a love of great Blues music and friendship, the band covers artists like Susan Tedeschi, Aretha Franklin, Merry Clayton, Johnny Lang and Jeff Beck. 8:00 PM. June 27: Wednesday Night Folk. SUMMER SINGER/SONGWRITER SHOWCASE. Over a half dozen veteran and up-and-coming local singer/songwriters strut their stuff. 8:00 PM. June 30: SASK VS. MONTREAL. Kickoff is at 7:00 PM. Enjoy our gourmet MONTREAL BURGER & A PINT special for only $18.95. Think of it as “devouring” the competition!

By Patrick Springer
FARGO—Stacked pallets filled with bags of malt line the back of Drekker Brewing Co. here and a fermenting aroma vaguely reminiscent of baking bread perfumed the brew house. The pleasant smell was a mild distraction as Mark Bjornstad, Drekker's co-founder, explained the crucial role of malt as a key ingredient in brewing beer. Bjornstad pointed to stacks of bags filled with malt, made from barley—destined to become barrels of beer—and noted that the vast majority of malt used by Drekker and other craft brewers is derived from barley with heads containing two rows of kernels. By contrast, the traditional lagers customarily made by mass brewers is made with six-row barley, and the preference is the cause of ferment in the brewing industry. As Dekker's malt stockroom suggests, the rising popularity of craft beer has been behind a shift in barley production, away from the traditional six-row varieties to the two-row varieties that are increasingly in demand. Brewers favor two-row malts because produce a bushel produces more barrels of beer and because the kernels on two-row barley grow more uniformly, which helps consistency. "They grow nice and plump and round," Bjornstad said. "We need every kernel to be the same size, the same plumpness, when it goes through the mill." Last year, microbreweries like Drekker accounted for more than 23 percent of the $111.4 billion U.S. beer market and craft beer volume sales increased 5 percent, continuing a trend of rapid growth in recent years, while overall beer volume sales were down 1.2 percent. That's a significant switch for barley growers and malters in North Dakota and Minnesota, both major states in barley production, where six-row barley has been grown for more than a century and still predominates, although two-row varieties are gaining in both states. "I don't think it's a shift among craft brewers," Bjornstad said. "Craft brewers have almost always used two-row barley malts." The shift has come as major commercial brewers, responding to consumer preferences involving the qualities and varieties of craft beers, have followed suit, he said. The transition to two-row barleys was given a big boost six or seven years ago, when Anheuser-Busch InBev announced it would focus on developing two-row varieties, said Marv Zutz, executive director of the Minnesota Barley Growers, based in Red Lake Falls. Cargill, in fact, recently cited the continuing switch to six-row barley and the western migration of barley production as reasons for shutting down its malting plant in Spiritwood, N.D., which employs 55 workers. But barley growers, who are facing flat-to-declining demand for beer overall, are not quick to complain about the pressures to grow different varieties of barley than those they were long accustomed to planting. "The craft brewers have been a lifesaver for the barley growers of the U.S.," Zutz said. Besides the change in consumer tastes toward craft brews, beers made by microbreweries usually are heavier, using three times as many bushels of barley for a barrel of beer, he said. "That has maintained the barley acres in the U.S.," Zutz said, noting craft beer demand has soared over the past decade or more. As a result, "We've come to a stabilized market." Rahr Malting Co., based in Shakopee, Minn., is a major behind-the-scenes player in the malting industry. It operates one of North America's largest malting plants in Shakopee and gets much of its barley from growers in North Dakota and Minnesota. To capitalize on the increasing popularity of craft beer, Rahr formed a subsidiary in 2004 called Brewers Supply Group, or BSG, which sells malt, hops and filtration products for microbreweries and home brewers. "The demand for those two-row barley varieties has increased significantly," said Jake Keeler, BSG's marketing director. Although demand for two-row varieties continues to grow, Keeler believes the six-row malts preferred by large commercial brewers will ensure demand for those varieties remain strong as well. "They're massive," he said, referring to the major brewers whose beers line the shelves of liquor stores. "They still have a place in the beer market. I don't think that's ever going to change." Still, creating BSG to cater to craft and home brewers was a move by Rahr to adapt to changes in the market, Keeler said. "We can act a little more like a small maltster." Consumers' constant thirst for variety—which is something Bjornstad sees in his taproom—is not going away, Keeler added. "I think people are looking for new experiences," he said. "They're looking for change." Craft brewers keep experimenting to cater to consumers' changing tastes, Bjornstad said. Besides his "base malt," he always carries a variety of specialty malts to brew beer with special flavors. Bjornstad, whose brewing evolution began as a beer aficionado, then graduated to home brewing before entering the business, is drawn to the constant evolution of beer varieties and flavors. "We're continuously sampling new malts and new varieties, all types of different flavors," he said. "That's what consumers are asking for." Barley and brewers' choice Two-row barley: Popular in Europe and among American craft brewers, who favor it because of its higher malt content as well as the uniformity and plumpness of its kernels. Two-row barley has low protein content. Growers in North Dakota and Minnesota, in response to consumer demand, are growing more two-row barley. Six-row barley: The traditional malt source for American lager beers. Favored by large brewers because it has higher enzyme levels that help to ferment adjunct grains, such as rice or corn. Also used for livestock feed because of high protein content.

A handful of 7-year-olds were asked what they thought of beer. Some interesting responses… - I think beer must be good. My dad says the more beer he drinks the prettier my mom gets. - Beer makes my dad sleepy and we get to watch what we want on television when he is asleep, so beer is nice. -  My mom and dad talk funny when they drink beer and the more they drink the more they give kisses to each other, which is a good thing. - My dad loves beer. The more he drinks, the better he dances. One time he danced right into the pool. - I don't like beer very much. Every time dad drinks it, he burns the sausages on the barbecue and they taste disgusting.