NEWS FROM THE BREWERY! Head brewer, MICHAEL GAETZ, reports our seasonally available CHINOOK ESB, POMEGRANATE-RASPBERRY fruit ale, BARON BOCK, TWO SONS MILK STOUT and BREW & GOLD DORTMUNDER are now on tap. A batch of HARBINGER MAIBOCK and KAI’S MUNICH HELLES are also currently working their way through the brewery. HONEY THISTLE WIT will also soon be here! Our guest tap is currently pouring the Saskatcheweizen Wheat Beer from Saskatoon’s Paddock Wood Brewery. Next up is a Pineapple Sour from Regina’s Pile O’ Bones Brewing. This will be followed by the Bitter Orange Chocolate Belgian Ale from Saskatoon’s Paddock Wood Brewing. Then the sour parade continues with a Dark Sour from 9 Mile Legacy Brewing. Our premium wines for the month of June are from the Trapiche Winery in Argentina. The red is their PURE BLACK MALBEC and the white is a RESERVE PINOT GRIGIO. Both are $7.95 for a glass and $22.95 for a half litre. 650 ml bottles of our number one selling DUNGARVON IRISH RED ALE are now available at the Rochdale, Emerald Park and brand new Southland Sobeys Liquor stores! Our SODBUSTER BROWN ALE is now available for growler fills at the Quance Street SLGA store in Regina. Three other fine Saskatchewan craft beers are also available. Enjoy them for a limited time! “TIE ONE ON” Father’s Day Growler Gift Boxes are now available. Includes your choice of a glass or stainless steel Bushwakker growler, two Bushwakker pint glasses, a growler fill gift certificate and a swanky tie all presented in a handsome gift box. $40 and $65 each. Limited quantities. 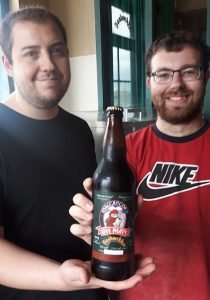 Congratulations to Bushwakker head brewer, Michael Gaetz, and assistant brewer, Bradley Dalrymple, on their bronze medal win at the 2018 Canadian Brewing Awards held in Halifax, Nova Scotia. They are keeping the family tradition alive and kicking! The Bushwakker anniversary ale, MacGregor’s Wee Heavy, certainly did us proud! If you happen to have a bottle of this award-winning Strong Scottish Ale, be sure to save it for your own victory celebration. It will continue to age and develop beautifully! Other Saskatchewan craft breweries who also performed well include Black Bridge Brewery in Swift Current, District Brewing in Regina and Churchill Brewing in Saskatoon. 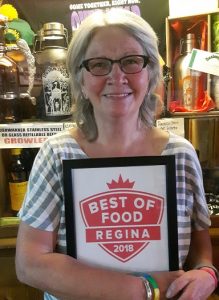 Thank you to our many devoted and enthusiastic supporters who voted for us in the Prairie Dog Magazine’s 2018 Best of Food Regina reader’s poll. We our honoured that you voted us as being Regina’s Best Brewpub, Best Pub Overall, Best Lunch Restaurant, Best Pub Grub, Best Place to Argue About Politics, Best Burger, Best Appetizers, Best Nachos and Best Server - Cheryl Tovey for her ninth time!

June 1: FIRST FIRKIN FRIDAY. Enjoy the pomp and circumstance of this long standing Bushwakker monthly tradition. A piper from the Regina Police Services Pipes and Drums leads a keg of special brew in a procession throughout the brewpub. A guest volunteer is selected to wield the handmade wooden maul affectionately referred to as The Mighty Firkin Wakker, and attempt to tap the firkin in one mighty blow. This month firkin offering will be a CHOCOLATE MILK STOUT. The delicious beer and suds-soaking experience takes place at 5:30 PM. June 4: Monday Night Jazz & Blues. TDC INC. Dueling vocalists fronting this 6 piece classic jazz/rock/blues group! 8:00 PM. June 6: Wednesday Night Folk. AMAYA LUCYK and ZULU PANDA. A Regina and Vancouver artist share the stage in this special double bill. 8:00 PM. June 8: SASK. VS. CALGARY. Enjoy our gourmet CALGARY BURGER & A PINT feature for only $18.95 before, during or after the pre-season home game. Think of it as “devouring” the competition! Kickoff is at 7:30 PM. June 11: Monday Night Jazz & Blues. THE JAZZ BAND-ITS. Over 20 members play big band, jazz and swing. 8:00 PM. June 13: Wednesday Night Folk. SUN ZOOM SPARX. Will be interesting! Funk, jazz fusion, psychedelia and mid-70’s ambience. 8:00 PM. June 14: 2018 JAZZFEST REGINA  Bushwakker Performance – THE NEW MONTAGUES.  7:00 PM. The biggest night of the year for live jazz at The Bushwakker! Their show at Bushwakker sold out last year so The New Montagues and their epic band sound are back again to hit the stage for the 10th edition of the Queen City’s very own jazz festival.  The nine-member band plays the best of funk, soul, r & b, disco and pop with hits by Stevie Wonder, The Bee Gees, The Doobie Brothers, Bruno Mars, Amy Winehouse, Earth, Wind & Fire and more. The New Montagues are one of Regina’s hottest party bands. Their amazing three-piece horn section really get things stirred up and delivers an energetic sound that will make you want to move! Rush seating tickets are $15. https://www.facebook.com/events/1138025282906930/ June 16: SASK. VS. TORONTO. The first home game of the regular season kicks off at 7:00 PM. Be sure to enjoy our gourmet TORONTO BURGER & A PINT special for only $18.95 before, during or after the game. Best of luck in 2018 Riders! June 18: Monday Night Jazz & Blues. ‘ROUND MIDNIGHT. Veteran Regina act plays popular jazz and adult contemporary tunes. 8:00 PM. June 20: Wednesday Night Folk. BRADFORD. Talented duo featuring Brad Papp and Mark Radford. 8:00 PM. June 25: Monday Night Jazz & Blues. SUFFICIENT CONDITION. With a love of great Blues music and friendship, the band covers artists like Susan Tedeschi, Aretha Franklin, Merry Clayton, Johnny Lang and Jeff Beck. 8:00 PM. June 27: Wednesday Night Folk. SUMMER SINGER/SONGWRITER SHOWCASE. Nathan Davis, Kennedy Thompson, Regan Hinchcliffe, Trent Leggott, and Neil Child strut their stuff. 8:00 PM.

The Importance of Independent Ownership Is a Global Phenomenon

By Julia Herz Launched a mere 11 months ago by the Brewers Association, the independent craft brewer seal has spurred a fundamental shift in the craft beer movement. The demand to show and know if a brewery is independently owned is now not only a U.S. phenomenon, but a global one as well. Independent breweries in Ireland and now Australia have taken steps to provide clarity and transparency to the beer lover. Make no mistake about it: we are witnessing a global movement dedicated to the worthy cause of transparency and the importance of brewery independence. Below is the press release on the recently announced seal from Australia. Independent Brewers Association unveils new independent beer seal May 14, 2018 The Independent Brewers Association (IBA) has launched their seal of independence to help consumers easily identify what beers are locally owned by independent Australian brewers. At an event at Collingwood brewery Stomping Ground, the IBA hosted local independent brewers and media to unveil the seal for the first time, and reveal their plans to highlight the benefits of supporting independent craft beer to the Australian public. The IBA hopes that the launch of the seal will help shift consumer demand away from industrialised beer to local products, especially as foreign owned multinational brewing companies are increasingly creating new ‘craft beer’ brands. Encouraging consumers to #askforindiebeer, the Seal will start being seen over the next few months and will be present on beer packaging, vessels and tap points of the brewers signed up to the movement. IBA board member Will Tatchell said the movement is focused on educating beer drinkers in Australia. “We want to educate all beer consumers, especially those who still consume industrialised beer made by massive multinational corporations, to ensure that they understand the variety, quality and emotional engagement that beer made by local independent breweries offers.” Similar marks of independence have already been launched overseas, with the US Brewers Association recently launching their own Independent Craft Brewer Seal. “The trend towards locally brewed, hand-crafted beer made by small independent breweries is not a fad, it is a fundamental shift on a global scale that is bigger than just beer and more so about the stories behind the product,“ said Will. First launched in 2012 under the Craft Beer Industry Association banner and reborn as the Independent Brewers Association in 2016, the IBA sets itself to be the voice of independent brewers across the nation, with their mission to make quality independent beer available everywhere. Currently, 50% of the nation’s craft brewers are a part of the IBA, with all IBA member s eligible to use the seal by entering into a license agreement through the IBA website. A Supporter Seal for retailers, venues and industry associates is also available for use at Askforindiebeer.com.au 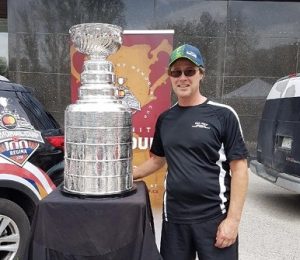 Bushwakker Executive Chef, Mike Monette, is almost as passionate about sports as he is about cooking. He was thrilled to have a chance to pose with the Stanley Cup earlier this month.

A lady went into a bar in Waco and saw a cowboy with his feet propped up on a table. He had the biggest boots she'd ever seen. The woman asked the cowboy if it's true what they say about men with big feet are well endowed. The cowboy grinned and said, "Shore is, little lady. Why don't you come on out to the bunkhouse and let me prove it to you?" The woman wanted to find out herself, so she spent the night with him. The next morning she handed him a $100 bill. Blushing, he said, "Well, thankee, ma'am. Ah'm real flattered. Ain't nobody ever paid me fer mah services before." "Don't be flattered. Take the money and buy yourself some boots that fit."