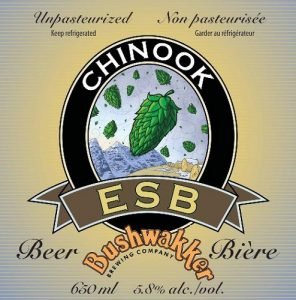 Our long time beloved Chinook ESB finally has its own label. Thanks once again to local artist, Gavin de Lint, for creating this beautiful image. This seasonally available beer is a big British style extra special bitter, well balanced with lots of caramel malt sweetness, fruity esters, hop aroma and bitterness. Named after the warm winds that melt our snow as well as the hop utilized in this ale. Our guest tap is currently pouring a White Sage & Rye IPA from the Black Bridge Brewery in Swift Current. Next up is the Saskatcheweizen Wheat Beer from Saskatoon’s Paddock Wood Brewery. This will be followed by a Pineapple Sour from Regina’s Pile O’ Bones Brewing. Our premium wines for the month of May are from France. The red is LES DAUPHINS COTES DU RHONE RESERVE RED (Grenache, Syrah, Mourvèdre.) The white is LES FLEURS DU MAL COTES DE GASCOGNE (Colombard, Gros Manseng, Sauvignon Blanc.) Both are $7.95 for a glass and $22.95 for a half litre. 650 ml bottles of our number one selling DUNGARVON IRISH RED ALE are now available at the Rochdale, Emerald Park and brand new Southland Sobeys Liquor stores! Our SODBUSTER BROWN ALE is now available for growler fills at the Quance Street SLGA store in Regina. Three other fine Saskatchewan craft beers are also available. Enjoy them for a limited time! “TIE ONE ON” Father’s Day Growler Gift Boxes are now available. Includes your choice of a glass or stainless steel Bushwakker growler, two Bushwakker pint glasses, a growler fill gift certificate and a swanky tie all presented in a handsome gift box. $40 and $65 each. Limited quantities.

May 28: Monday Night Jazz & Blues. 8’S ENUFF. Mini big band packs a powerful punch and delivers big, jazz and swing. 8:00 PM. May 30: Wednesday Night Folk. RON LOOS. Razor-sharp wit and fancy guitar pluckin’. 8:00 PM. June 1: FIRST FIRKIN FRIDAY. Enjoy the pomp and circumstance of this long standing Bushwakker monthly tradition. A piper from the Regina Police Services Pipes and Drums leads a keg of special brew in a procession throughout the brewpub. A guest volunteer is selected to wield the handmade wooden maul affectionately referred to as The Mighty Firkin Wakker, and attempt to tap the firkin in one mighty blow. This month firkin offering will be a CHOCOLATE MILK STOUT. The delicious beer and suds-soaking experience takes place at 5:30 PM. June 4: Monday Night Jazz & Blues. TDC INC. Dueling vocalists fronting this 6 piece classic jazz/rock/blues group! 8:00 PM. June 6: Wednesday Night Folk. AMAYA LUCYK and ZULU PANDA. A Regina and Vancouver artist share the stage in this special double bill. 8:00 PM. June 8: SASK. VS. CALGARY. Enjoy our gourmet CALGARY BURGER & A PINT feature for only $18.95 before, during or after the pre-season home game. Think of it as “devouring” the competition! Kickoff is at 7:30 PM. June 11: Monday Night Jazz & Blues. THE JAZZ BAND-ITS. Over 20 members play big band, jazz and swing. 8:00 PM. June 13: Wednesday Night Folk. SUN ZOOM SPARX. Will be interesting! Funk, jazz fusion, psychedelia and mid-70’s ambience. 8:00 PM. June 14: 2018 JAZZFEST REGINA  Bushwakker Performance – THE NEW MONTAGUES.  7:00 PM. The biggest night of the year for live jazz at The Bushwakker! Their show at Bushwakker sold out last year so The New Montagues and their epic band sound are back again to hit the stage for the 10th edition of the Queen City’s very own jazz festival.  The nine-member band plays the best of funk, soul, r & b, disco and pop with hits by Stevie Wonder, The Bee Gees, The Doobie Brothers, Bruno Mars, Amy Winehouse, Earth, Wind & Fire and more. The New Montagues are one of Regina’s hottest party bands. Their amazing three-piece horn section really get things stirred up and delivers an energetic sound that will make you want to move! Rush seating tickets are $15. https://www.facebook.com/events/1138025282906930/ June 15: SASK. VS. TORONTO. The first home game of the regular season kicks off at 7:00 PM. Be sure to enjoy our gourmet TORONTO BURGER & A PINT special for only $18.95 before, during or after the game. Best of luck in 2018 Riders! June 18: Monday Night Jazz & Blues. ‘ROUND MIDNIGHT. Veteran Regina act plays popular jazz and adult contemporary tunes. 8:00 PM.

From: The Beer Connoisseur Pete Coors, chairman of Molson Coors' board of directors, has written an "open letter" to the Brewers Association regarding the perceived negativity leveled at the Molson Coors brewing monolith. Coors's thesis is that the Brewers Association is failing the industry by acting in an adversarial way towards larger, multi-national breweries. "The leadership of the Brewers Association does a great disservice to the entire beer value chain by attempting to pit one part of the industry against another," Coors said in his letter, which he wrote in response to a speech given last week during Nashville, Tennessee's Craft Brewers Conference as well as an editorial in The New Brewer magazine. Nikos Ridge, co-founder and president of Ninkasi Brewing Co. responded to Coors's letter with a paragraph-by-paragraph breakdown of his disagreements with Coors on the subject shortly thereafter. Squabbles between macro brewers and craft brewers have been fairly frequent in recent years, especially with the rise of acquisitions, but rarely has a major figure like Pete Coors spoken out against the perceived mistreatment of multi-national brands at the hands of craft brewers. Here is the original letter from Pete Coors to the Brewers Assocation: A Letter to the BA From Pete Coors Congratulations on the remarkable attendance at this year’s Craft Brewers Conference in Nashville. The high turnout speaks to the interest and passion that brewers, suppliers, and the general public have for beer and the brewing industry. As a paying member of the Brewers Association, I enjoy my subscription to The New Brewer. It is the reason I have taken the time to write a point of view concerning the ongoing vitriol expressed in its pages and most recently reaffirmed by BA Chairman Eric Wallace and President Bob Pease toward the large, non-independent brewers. The brewing industry is not exclusively made up of “large, multinational brewers” or “big brewers” or “faux craft brewers.” It is not exclusively made up of “mass produced” beer, craft brewers or home brewers. Rather, the beer industry is a combination of large and small brewers, retailers, distributors, and suppliers who are passionate about their craft and committed to their businesses. And, they are passionate about competing for the millions of American consumers who love beer. The leadership of the Brewers Association does a great disservice to the entire beer value chain by attempting to pit one part of the industry against another. You must know that it is insulting to those of us who don’t meet the clever criteria of your self-proclaimed definition of “craft brewer.” This approach prioritizes insults and division over unity for a beverage that has been used to unify and celebrate together for generations. Should the highly educated and trained brewers who work for large brewers or the breweries that have been purchased by them be included in the disdain you seem to have for them? Should the quality of beers produced by them, including hundreds of quality medals be insulted by the Brewers Association simply because the parent company isn’t part of your ever-changing “club?” Didn’t all large brewers start as craft brewers? Don’t all craft brewers wish to grow and be prosperous? We share distributors, many of whom would not be able to distribute Brewers Association beers without the scale provided by the large brewers. You claim that your members are precluded from distribution at retail, while I visit account after account that do not carry any “big brewer” products. Competition in our industry should be honored and cherished. I agree with you that craft brewers are “exemplars of the American Dream, of entrepreneurial spirit”. However, you must realize that big brewers are as well. There should be no room for cheap shots and insults (“faux”, “crafty”, “capitulated” beers) for each other. That is a slippery slope that does not end well for our industry. We have enough competition inside the beer business and outside it with wine, spirits and, increasingly, marijuana. You undermine your credibility by pitting us against one another to the ultimate detriment of the entire beer industry. Keep your independent seal, your pride and your zeal for brewing, but let’s be united as an industry. There are other enemies we all must fight together. Editor’s note: Hmmmmm…those big brewery Super Bowl commercials come to mind. Cheap shots? 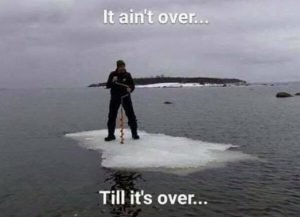 A guy receives an ad in the mail for a golf resort where everything costs one dollar. He jumps at the offer and heads off for a weekend of fun in the sun. He arrives and plays a round of golf. It cost him a buck. When he goes for dinner that evening, it costs him another buck. His room is only a buck a day! The day before he's to check out, he heads out to play a last round and stops by the pro shop and charges a sleeve of three balls to his room. When he's checking out next morning, he looks at the bill and sees:     Golf: $1.00     Dinner: $1.00     Room: $1.00      Sleeve of golf balls: $3,000.00 He asks the Manager, "What is this all about? Everything is supposed to cost one dollar, and you charged me three thousand for three golf balls?" "I'm sorry, sir, said the manager, but you didn't read the fine print in our promotional brochure. That's what our golf balls cost." "Well, said the man, If I wanted to spend that kind of money, I could've gone to that luxury hotel across the street and paid a thousand dollars a day for a room. At least I would've known what I was paying for!" "That's right, sir, you could have, said the manager. Over there they get you by the room. Over here we get you by the balls!"