NEWS FROM THE BREWERY! Head brewer, MICHAEL GAETZ, reports our seasonally available PONCE DE LEON blackberry/raspberry fruit ale, BARON BOCK, TWO SONS MILK STOUT and BREW & GOLD DORTMUNDER are now on tap. A batch of CHINOOK ESB and HARBINGER MAIBOCK are also currently working their way through the brewery. Our guest tap is currently pouring a Lemon Ginger Radler from Regina’s District Brewing Company. Next up is a White Sage & Rye IPA from the Black Bridge Brewery in Swift Current. This will be followed by the Saskatchaweizen Wheat Beer from Saskatoon’s Paddock Wood Brewery. Our premium wines for the month of May are from France. The red is LES DAUPHINS COTES DU RHONE RESERVE RED (Grenache, Syrah, Mourvèdre.) The white is LES FLEURS DU MAL COTES DE GASCOGNE (Colombard, Gros Manseng, Sauvignon Blanc.) Both are $7.95 for a glass and $22.95 for a half litre. 650 ml bottles of our number one selling DUNGARVON IRISH RED ALE are now available at the Rochdale, Emerald Park and brand new Southland Sobeys Liquor stores! Tourism Saskatchewan recently released a video on social media touting the passion many Saskatchewan craft brewers have for their products. Many Saskatchewan craft brewers have applauded how this video has captured the essence of what we do. To view their “From Grain to Glass” video please visit: https://youtu.be/zrn1TKu9IU0 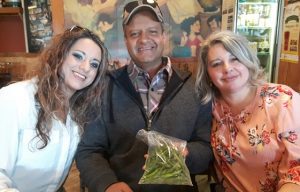 Tony Matharu from Regina’s India Food Centre hand-selected the Thai Green Chilies used to create the 2018 Bushwakker Screamin’ Mosquito Chili Beer. Tony is shown here with his wife and daughter. We are pleased to partner with another Regina small independent business!

May 18: ANNUAL SCREAMIN’ MOSQUITO CHILI BEER RELEASE. Our hot pepper-infused blonde ale makes its annual return this weekend. We have partnered with local businessman, Tony Matharu at the India Food Centre in Regina to provide a selection of fresh spicy peppers that will showcase their unique flavours in addition to varying degrees of heat. The first pepper offering will a nice, easy introduction to the style and is one of our most popular offerings – the classic Thai Green Chili! Hurts so good! May 18, 19 & 20: MAY LONG WEEKEND KEG EVENT. What better way to celebrate the year’s first warm-ish long weekend than with a Bushwakker keg? Receive free ice, cups, coasters and the use of a keg chiller tub with any May long weekend keg order. Four sizes of kegs are available for any gathering big or small. May 19: THE 3rd POET LAUREATE’S POETRY & A PINT PRESENTATION. The Saskatchewan Poet Laureate Program was the first provincial program of its kind in Canada. The Saskatchewan Arts Board, Saskatchewan Book Awards, and the Saskatchewan Writers’ Guild are partners in the program, which is under the patronage of the Lieutenant Governor. Enjoy a Saturday afternoon of poetry readings from some of Regina and area’s established and up-and-coming writers including: Brenda Schmidt (Poet Laureate of Saskatchewan), Bernadette Wagner, Chelsea Coupal, Gillian Harding-Russell, Randy Lundy and Shelly Banks. Perhaps enjoy a slice of our special limited edition Poetry Dessert! 3:00 PM. 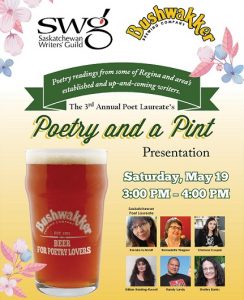 May 21: Open Victoria Day: Noon - 9:00 PM. May 23: Wednesday Night Folk: SKYLAR BOUCHARD. Acclaimed Winnipeg singer/songwriter makes his Bushwakker debut. 8:00 PM. May 24: HEALTH SCIENCE PUB presented by the Integrated Health Research Cluster. Citizen Scientists Creating Healthy Cities. Our wildly popular Science Pub Series has returned for a sixth incredible season! Enjoy lectures on scientific topics of general interest in our Arizona Room (main floor banquet room) over beer and snacks. The room opens at 5:00 PM and quite often is full by 6:00 PM. Avoid disappointment and come down early for dinner and a pint before the presentation which begins at 7:00 PM. This month's lecture will be presented by Dr. Tarun Katapally, Assistant Professor, Johnson-Shoyama Graduate School of Public Policy, University of Regina. Physical inactivity costs world health care systems $67.5B per year and our ever growing urban environments can create barriers to an active lifestyle. By recruiting citizen scientists and employing the technology almost all of us already have in our pocket, Dr. Katapally's research is identifying those barriers and developing policies that can better promote urban landscapes that encourage an active lifestyle. Using a platform easily downloadable onto a smart phone, hundreds of citizens in Regina and Saskatoon have been engaged to provide the data that allows the researchers  to  see  patterns  of  movement  across  the cities in  different seasons and to map active living barriers and facilitators from the perspective of the people who live there. May 28: Monday Night Jazz & Blues. 8’S ENUFF. Mini big band packs a powerful punch and delivers big, jazz and swing. 8:00 PM. May 30: Wednesday Night Folk. RON LOOS. Razor-sharp wit and fancy guitar pluckin’. 8:00 PM.

The Pink Boots Society Connects and Empowers All Women in Beer

By Cat Wolinski   Assist, inspire, and encourage are the three words used to describe the goals of the Pink Boots Society (PBS). Based in Warrenton, Ore., this major beer organization has one paid employee. All of its 1,800 members in 76 chapters across eight countries are women or women-identifying beer professionals. The Pink Boots Society connects female members of the industry through online forums, chapter meetings, fundraisers, and brew days. But its main focus is education, according to Laura Ulrich, Pink Boots Society president. “We want women to be able to advance their careers through education,” she says. Ulrich is also small batch brewer at Stone Brewing in San Diego, where she has worked in a variety of roles over the last 14 years. And Pink Boots is succeeding — the number of scholarships awarded to members is increasing each year. In the last few months, these have included an Oregon State University Beer Quality & Analysis Scholarship, awarded in March to Jocelyn Havel of San Leandro, Calif.’s 21st Amendment Brewery; the Cicerone BeerSavvy® scholarship, awarded in February to Brooke Franus of Stewards of Beer in Pittsburgh, Pa.; and the Siebel World Brewing Academy Concise Course in Brewing Technology scholarship, awarded in January to Jennifer (Jenna) Munoz of the Brew Lab in Kansas City, Kan. All PBS members are eligible to apply, and winners are selected by the PBS Scholarship Selection Committee on a monthly or more frequent basis. To become a Pink Boots Society member, applicants must hold an income-earning role in the beer industry, which isn’t exclusive to brewers, Ulrich says. At the Society’s first-ever meeting at the Craft Brewers Conference in San Diego in 2008, “the vote was unanimous that we wanted to be inclusive and have anybody that had an income from beer be a part of the Pink Boots Society,” Ulrich says. This means brewers, marketers, taproom servers, and yes, even writers like this author, are welcome. From the Bootstraps PBS was founded in 2007 by Teri Fahrendorf, one of the country’s first female brewmasters. At the time, Fahrendorf had most recently served as brewmaster at Steelhead Brewing Co. in Eugene, Ore. “Teri decided she was going to quit her job and go on this epic beer tour and visit breweries across the country,” Ulrich says. On her journey, she met Ulrich at Stone. “I had no idea that there were female brewers out there,” Ulrich says. “It kind of solidified that women did this as a career.” It also signified the need for a community. With a list of 60 female brewers whom she’d met along her five-month journey to 71 breweries, Fahrendorf started the Pink Boots Society. The name was inspired by another women’s group, the Red Hat Society. At the time of the Pink Boots Society’s first meeting in 2008, 22 women were in attendance. At this year’s Craft Brewers Conference, held April 30 to May 3 in Nashville, 130 PBS members signed up — a sixfold increase in 10 years. Raising the Bar Another major facet of the Pink Boots Society is its fundraising events. The biggest is the International Women’s Brew Day, held on or around March 8, to commemorate International Women’s Day. Chapters around the world brew a Pink Boots Brew based on a certain theme. For 2018, the recipe had to include a special Pink Boots hop blend,  created in partnership with YCH Hops. The blend included Mosaic, Palisades, Laurel, Citra, and Simcoe hops. “It’s been such a huge hit, everybody’s been raving about it. We’re doing it again at [the Great American Beer Festival] in 2018,” Ulrich says. The brew wasn’t only tasty — it also generated the largest donation Pink Boots has ever received. For every pound of the hop blend purchased by brewers, $3 was donated to the Pink Boots Society, totaling $38,000. Other fundraising events include the Bière de Femme festival organized by the North Carolina chapter, and FemAle Brew Fest in Fort Lauderdale. Tickled Pink “The rate that Pink Boots is growing, the leaps and bounds that we’re making, is pretty impressive and rather incredible,” Ulrich says. “I’ve got a strong group of women that … put in a lot of volunteer hours, and they do it all because they care about the Society, they care about helping women. That’s all what it comes down to, is having another woman’s back and supporting each other.”