NEWS FROM THE BREWERY! Head brewer, MICHAEL GAETZ, reports our seasonally available PONCE DE LEON blackberry/raspberry fruit ale, BARON BOCK, TWO SONS MILK STOUT, SASKADIAN BLACK IPA and BREW & GOLD DORTMUNDER are now on tap. A batch of CHINOOK ESB and HARBINGER MAIBOCK are also currently working their way through the brewery. Our guest tap is currently pouring Saskatoon’s 9 Mile Legacy Brewing 2018 Biere de Garde Anniversary Ale. Up next is a Lemon Ginger Radler from Regina’s District Brewing Company. This will be followed by the White Sage & Rye IPA from the Black Bridge Brewery in Swift Current. Our premium wines for the month of May are from France. The red is LES DAUPHINS COTES DU RHONE RESERVE RED (Grenache, Syrah, Mourvèdre.) The white is LES FLEURS DU MAL COTES DE GASCOGNE (Colombard, Gros Manseng, Sauvignon Blanc.) Both are $7.95 for a glass and $22.95 for a half litre. 650 ml bottles of our number one selling DUNGARVON IRISH RED ALE are now available at the Rochdale, Emerald Park and brand new Southland Sobeys Liquor stores! The Bushwakker LOCAL ARTIST WALL for the month of May features the works of CARMEN BEATON. Her artist biography is as follows; I was born and raised in Regina, and have been drawn to visual art for as long as I can remember. I started a Bachelor of Fine Arts degree at the University of Regina in 2010. A couple years into my program I decided to pursue a degree in science instead. I took a hiatus from creating art to complete my degree, and graduated in 2016 with a major in biology and a minor in Fine Arts. In the spring of 2017, I decided to return to my artistic roots. It was at this time that I began drawing and painting again. I work mostly in graphite and oil paint. My current work focuses primarily on my personal experiences; I use the human form and portraiture to process and navigate through painful events. I hope that some of my works resonate with you, the viewer, and that you are able to find some connection to them based on your own personal experiences. 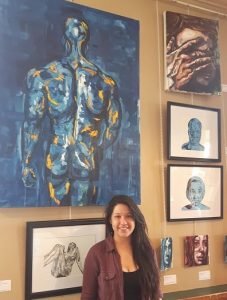 To see more of her work please visit: http://www.instagram.com/carmenbeaton.art where a comprehensive summary of her talents await you! Enjoy Carmen's works all this month!

May 14: Monday Night Jazz & Blues. BRIAN BAGGETT AND BEN WINOSKI. Chapman Stick master meets acoustic guitar whiz. One powerful duo! 8:00 PM. May 16: Wednesday Night Folk. SEAN PINCHIN. Ontario folk and bluesman on a cross Canada tour. 8:00 PM. May 17: THE EAGLES AT MOSAIC STADIUM. Be sure to stop by before, during or after the big concert to enjoy our Hotel California Burger & a Pint feature. May 18: ANNUAL SCREAMIN’ MOSQUITO CHILI BEER RELEASE. Our hot pepper-infused blonde ale makes its annual return this weekend. We have partnered with local businessman, Tony Matharu at the India Food Centre in Regina to provide a selection of fresh spicy peppers that will showcase their unique flavours in addition to varying degrees of heat. The first pepper offering will a nice, easy introduction to the style and is one of our most popular offerings – the classic Thai Green Chili! Hurts so good! May 18, 19 & 20: MAY LONG WEEKEND KEG EVENT. What better way to celebrate the year’s first warm-ish long weekend than with a Bushwakker keg? Receive free ice, cups, coasters and the use of a keg chiller tub with any May long weekend keg order. Four sizes of kegs are available for any gathering big or small. May 19: THE 3rd POET LAUREATE’S POETRY & A PINT PRESENTATION. The Saskatchewan Poet Laureate Program was the first provincial program of its kind in Canada. The Saskatchewan Arts Board, Saskatchewan Book Awards, and the Saskatchewan Writers’ Guild are partners in the program, which is under the patronage of the Lieutenant Governor. Enjoy a Saturday afternoon of poetry readings from some of Regina and area’s established and up-and-coming writers including: Brenda Schmidt (Poet Laureate of Saskatchewan), Bernadette Wagner, Chelsea Coupal, Gillian Harding-Russell, Randy Lundy and Shelly Banks. Perhaps enjoy a slice of our special limited edition Poetry Dessert! 3:00 PM. May 23: Wednesday Night Folk: SKYLAR BOUCHARD. Acclaimed Winnipeg singer/songwriter makes his Bushwakker debut. 8:00 PM. May 21: Open Victoria Day: Noon - 9:00 PM. May 23: Wednesday Night Folk: SKYLAR BOUCHARD. Acclaimed Winnipeg singer/songwriter makes his Bushwakker debut. 8:00 PM. May 24: HEALTH SCIENCE PUB presented by the Integrated Health Research Cluster. Citizen Scientists Creating Healthy Cities. Our wildly popular Science Pub Series has returned for a sixth incredible season! Enjoy lectures on scientific topics of general interest in our Arizona Room (main floor banquet room) over beer and snacks. The room opens at 5:00 PM and quite often is full by 6:00 PM. Avoid disappointment and come down early for dinner and a pint before the presentation which begins at 7:00 PM. This month's lecture will be presented by Dr. Tarun Katapally, Assistant Professor, Johnson-Shoyama Graduate School of Public Policy, University of Regina. Physical inactivity costs world health care systems $67.5B per year and our ever growing urban environments can create barriers to an active lifestyle. By recruiting citizen scientists and employing the technology almost all of us already have in our pocket, Dr. Katapally's research is identifying those barriers and developing policies that can better promote urban landscapes that encourage an active lifestyle. Using a platform easily downloadable onto a smart phone, hundreds of citizens in Regina and Saskatoon have been engaged to provide the data that allows the researchers to see patterns of movement across the cities in different seasons and to map active living barriers and facilitators from the perspective of the people who live there. May 28: Monday Night Jazz & Blues. 8’S ENUFF. Mini big band packs a powerful punch and delivers big, jazz and swing. 8:00 PM. May 30: Wednesday Night Folk. RON LOOS. Razor-sharp wit and fancy guitar pluckin’. 8:00 PM. 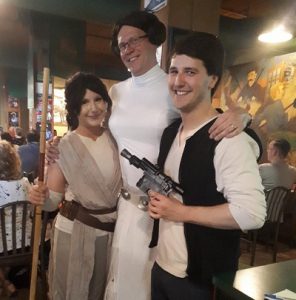 A packed house for our “May the Fourth be With You” edition of First Firkin Friday. The Galaxy Dry-Hopped Jed-Ipa received almost as many rave reviews as did bar manager Grant!

An attorney arrived home late, after a very tough day trying to get a stay of execution for a client who was due to be hanged for murder at midnight. His last minute plea for clemency to the governor had failed and he was feeling worn out and depressed.  As soon as he walked through the door at home, his wife started on him about, “What time of night to be getting home is this? Where have you been? 'Dinner is cold and I'm not reheating it.” And on and on and on. Too shattered to play his usual role in this familiar ritual, he went and poured himself a shot of single malt scotch and headed off for a long hot soak in the bathtub, pursued by the predictable sarcastic remarks as he dragged himself up the stairs.  While he was in the bath, the phone rang. The wife answered and was told that her husband's client, James Wright, had been granted a stay of execution after all. Wright would not be hanged tonight. Finally realizing what a terrible day he must have had, she decided to go upstairs and give him the good news. As she opened the bathroom door, she was greeted by the sight of her husband, bent over naked, drying his legs and feet.  “They're not hanging Wright tonight,” she said. To which he whirled around and screamed, “FOR THE LOVE OF GOD, WOMAN, DON'T YOU EVER STOP?”