NEWS FROM THE BREWERY! Head brewer, MICHAEL GAETZ, reports our seasonally available PONCE DE LEON blackberry/raspberry fruit ale, BARON BOCK, TWO SONS MILK STOUT, SASKADIAN BLACK IPA and BREW & GOLD DORTMUNDER are now on tap. A batch of CHINOOK ESB andHARBINGER MAIBOCK are also currently working their way through the brewery. Our guest tap is currently pouring a Double IPA from Swift Current’s Black Bridge Brewery. Then we will pour Saskatoon’s 9 Mile Legacy Brewing 2018 Biere de Garde Anniversary Ale which will be followed by a Lemon Ginger Radler from Regina’s District Brewing Company. Our premium wines for the month of May are from France. The red is LES DAUPHINS COTES DU RHONE RESERVE RED (Grenache, Syrah, Mourvèdre.) The white is LES FLEURS DU MAL COTES DE GASCOGNE (Colombard, Gros Manseng, Sauvignon Blanc.) Both are $7.95 for a glass and $22.95 for a half litre. 650 ml bottles of our number one selling DUNGARVON IRISH RED ALE are now available at the Rochdale, Emerald Park and brand new Southland Sobeys Liquor stores! 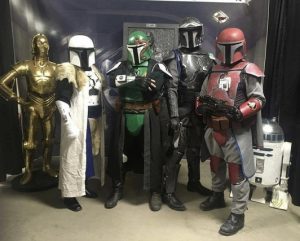 Wear your best Star Wars costume and join our “May the Fourth” First Firkin Friday keg procession for a chance to win a $100 Bushwakker gift card!

May 4: FIRST FIRKIN FRIDAY – Special “May the Fourth Be With You” Edition. The big Fan Expo Regina event is this weekend and we want to help celebrate! Put on your best Star Wars costume and join the procession as a keg of special brew is paraded throughout the brewpub. A $100 Bushwakker gift card will be awarded to the person wearing the best Star Wars costume as determined by the audience. Yes, our piper from the Regina Police Services Pipes & Drums does indeed know how to play one or two Star Wars themes! All those wearing Star Wars costumes are invited to the Bushwakker basement clubroom for a Regina Fan Expo Meet & Greet event where limited COMPLIMENTARY APPETIZERS AND BEER will be available. Kitchen offerings that day include “HOTH” & SOUR SOUP, THE “DARK SIDE” CORN DOG and a “BANTHA” ELK BURGER. A guest volunteer will be selected to wield the handmade wooden maul affectionately referred to as The Mighty Firkin Wakker, and attempt to tap the firkin in one mighty blow. This “May the fourth” special offering will be a special Galaxy dry-hopped JED-IPA. The next First Firkin Friday May the Fourth event won’t take place until 2029 so don’t miss this rare occasion. The space opera suds-soaking experience takes place at 5:30 PM. May 5: BIG BREW DAY. The ALES Club and the Bushwakker Brewpub continue this longstanding tradition of celebrating craft beer at the grassroots level. Members of the club join Bushwakker head brewer, Michael Gaetz, and assistant brewer, Bradley Dalrymple, in brewing a special Imperial Brown Ale. May 5: BUSHWAKKER AT SAVOUR THE SOUTHEAST. Back for its third edition at Affinity Place in Estevan, Saskatchewan. We make our debut at this popular Food, Wine, Beer, Spirit and Music Festival. 7:00 PM. May 7: Monday Night Jazz & Blues. THE MINISTRY OF GROOVE. 1970’s jazz funk and beyond. Love those horns! 8:00 PM. May 9: Wednesday Night Folk. FARMER THE BAND. Canadian-grown American folk act from southern B.C. 8:00 PM. May 14: Monday Night Jazz & Blues. BRIAN BAGGETT AND BEN WINOSKI. Chapman Stick master meets acoustic guitar whiz. One powerful duo! 8:00 PM. May 16: Wednesday Night Folk. SEAN PINCHIN. Ontario folk and bluesman on a cross Canada tour. 8:00 PM. May 17: THE EAGLES AT MOSAIC STADIUM. Be sure to stop by before, during or after the big concert to enjoy our Hotel California Burger & a Pint feature. May 18: ANNUAL SCREAMIN’ MOSQUITO CHILI BEER RELEASE. Our hot pepper-infused blonde ale makes its annual return this weekend. We have partnered with local businessman, Tony Matharu at the India Food Centre in Regina to provide a selection of fresh spicy peppers that will showcase their unique flavours in addition to varying degrees of heat. The first pepper offering will a nice, easy introduction to the style and is one of our most popular offerings – the classic Thai Green Chili! Hurts so good! May 18, 19 & 20: MAY LONG WEEKEND KEG EVENT. What better way to celebrate the year’s first warm-ish long weekend than with a Bushwakker keg? Receive free ice, cups, coasters and the use of a keg chiller tub with any May long weekend keg order. Four sizes of kegs are available for any gathering big or small. May 19: THE 3rd POET LAUREATE’S POETRY & A PINT PRESENTATION. The Saskatchewan Poet Laureate Program was the first provincial program of its kind in Canada. The Saskatchewan Arts Board, Saskatchewan Book Awards, and the Saskatchewan Writers’ Guild are partners in the program, which is under the patronage of the Lieutenant Governor. Enjoy a Saturday afternoon of poetry readings from some of Regina and area’s established and up-and-coming writers including: Brenda Schmidt (Poet Laureate of Saskatchewan), Bernadette Wagner, Chelsea Coupal, Gillian Harding-Russell, Randy Lundy and Shelly Banks. Perhaps enjoy a slice of our special limited edition Poetry Dessert! 3:00 PM. May 23: Wednesday Night Folk: SKYLAR BOUCHARD. Acclaimed Winnipeg singer/songwriter makes his Bushwakker debut. 8:00 PM. May 24: HEALTH SCIENCE PUB presented by the Integrated Health Research Cluster. Citizen Scientists Creating Healthy Cities. Our wildly popular Science Pub Series has returned for a sixth incredible season! Enjoy lectures on scientific topics of general interest in our Arizona Room (main floor banquet room) over beer and snacks. The room opens at 5:00 PM and quite often is full by 6:00 PM. Avoid disappointment and come down early for dinner and a pint before the presentation which begins at 7:00 PM. This month's lecture will be presented by Dr. Tarun Katapally, Assistant Professor, Johnson-Shoyama Graduate School of Public Policy, University of Regina.

Homebrewers Unite for AHA Big Brew on May 5

Thousands to Participate in Worldwide, Simultaneous Toast as American Homebrewers Association Celebrates 40th Anniversary What: In honor of National Homebrew Day (which falls every year on May 7), the American Homebrewers Association (AHA) celebrates AHA Big Brew on the first Saturday in May. Throughout the day on May 5, hundreds of bars, breweries, shops and homebrew clubs nationwide will host their local communities to brew on-site for a national, same-day homebrewing session. This year’s official Big Brew recipes—Rocky Raccoon’s Honey Lager and Dusty Mud Irish-style Stout—were handpicked by the legendary Charlie Papazian. Heralded as the “father of homebrewing,” Papazian is the founder of the AHA, which this year is celebrating its 40th anniversary. At noon CDT, all homebrewers and beer lovers are encouraged to raise their glass in a worldwide, simultaneous toast. When: All day long! Saturday, May 5, 2018 Where: Everywhere! From homebrewers’ homes and backyards, to the shops that provide the ingredients and supplies, to local breweries and craft beer bars worldwide. View an interactive map of AHA Big Brew event locations across the country. Register your local AHA Big Brew event and join the conversation on Twitter with #BigBrew18. Who: Everyone! As long as they’re 21 and over, of course. Why: There over 1.1 million homebrewers in the United States, 40 percent of which started homebrewing only within the last four years. AHA Big Brew is a toast to the nation’s homebrewers and their shared love and appreciation for homebrewed beer, mead and cider. In 1988, May 7 was announced before Congress as National Homebrew Day, and so the AHA created AHA Big Brew, held each year on the first Saturday in May, to celebrate National Homebrew Day across the U.S. and globe. About the American Homebrewers Association: The American Homebrewers Association (AHA) has worked on behalf of the homebrewing community since 1978 and celebrates a membership of 46,000 homebrewers. The AHA organizes  events including Homebrew Con and the National Homebrew Competition. The AHA also publishes Zymurgy® magazine and offers the Brew Guru™ mobile app. The AHA is part of the Brewers Association (BA), whose independent craft brewer seal is a widely adopted symbol that differentiates beers by small and independent craft brewers. The BA’s Brewers Publications™ division is the largest publisher of contemporary and relevant brewing literature for today’s craft brewers and homebrewers. Beer lovers and anyone interested in making their own homemade beer are invited to learn more at Homebrewers Association.org. Follow the AHA on Twitter, and join us on Facebook and Instagram. Editor’s note: We will also be continuing our tradition of connecting with the local homebrewing community and will be conducting a Big Brew Day at The Bushwakker. Members of the ALES homebrewing Club will be working with Bushwakker head brewer, Michael Gaetz, to create an Imperial Brown Ale bright and early on Saturday, May 5th. 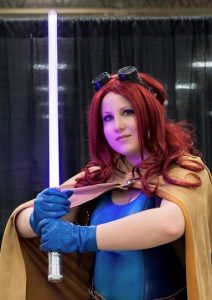 Jedi Mara Jade (Queen City Cosplay President Melody Wood) will be at Bushwakker for the special “May the Fourth” edition of First Firkin Friday.

It was mailman George's last day on the job after 35 years of delivering the mail through all kinds of weather. When he arrived at the first house on his route, the whole family came out, roundly congratulated him, and sent him on his way with a tidy gift envelope. At the second house they presented him with a box of fine cigars. The folks at the third house handed him a selection of terrific fishing lures. At the next house, he was met at the door by a strikingly beautiful woman in a revealing negligee. She took him by the hand, and led him up the stairs to the bedroom where she blew his mind with the most passionate love he had ever experienced. When he'd had enough, they went downstairs, where she fixed him a giant breakfast: eggs, potatoes, ham, sausage, blueberry waffles and fresh-squeezed orange juice. When he was truly satisfied, she poured him a cup of steaming coffee. As she was pouring, he noticed a dollar bill sticking out from under the cup's bottom edge. "All this is just too wonderful for words," he said, "but what's the dollar for?" "Well," she said, "last night, I told my husband that today would be your last day, and that I wanted to do something special for you. I asked him what to give you. He said, 'Screw him. Give him a dollar." "Breakfast was my idea."