NEWS FROM THE BREWERY! Head brewer, MICHAEL GAETZ, reports our seasonally available TWO SONS MILK STOUT, ARCTIC DARK MUNICH DUNKEL, SASKADIAN BLACK IPA and BREW & GOLD DORTMUNDER are now on tap. A batch of CHINOOK ESB, BARON BOCK and HARBINGER MAIBOCK are also currently working their way through the brewery. Our guest tap is currently pouring a keg of Batch 88 Oyster Stout from the Prairie Sun Brewery in Saskatoon. Next up is an Amber Sour from Nokomis Craft Ales. This will be followed by a Double IPA from Swift Current’s Black Bridge Brewery. Our premium wines for the month of April are from the Bodacious Winery in Ontario. The red is a Shiraz and the white is a Pinot Grigio. Both are $6.95 for a glass and $17.95 for a half litre. Our Cheryl’s Blonde Ale is now available for growler fills at the Quance Street SLGA store in Regina. Three other fine Saskatchewan craft beers are also available. Enjoy them for a limited time! 650 ml bottles of our number one selling DUNGARVON IRISH RED ALE are now available at the Rochdale, Emerald Park and brand new Southland Sobeys Liquor stores! Congratulations to the Saskatchewan Craft Brews Association on their win at the 2018 Tourism Saskatchewan Awards Gala held on April 12th. The new Association won the Fred Heal Tourism Ambassador Award, which recognizes major contributions to the promotion or development of Saskatchewan as a tourism destination. A special tribute to the late Bushwakker co-founder and president, Bev Robertson, was made at the event to acknowledge his lasting contributions; not only as a Saskatchewan craft beer pioneer, but also as one who understood the value a strong local craft brewing industry contributes to the provincial tourism sector. Bev’s national award-winning Palliser Porter was shared in a toast by all those in attendance. 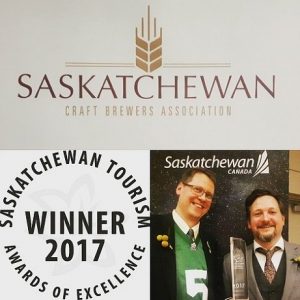 Apr. 23: Monday Night Jazz & Blues. A STORRY WITH HUGHES.  Acoustic Blues duo featuring Billy Hughes and Jeff Storry. 8:00 PM. Apr. 25: Wednesday Night Folk. DALE MAC. Regina based mainstream alternative/rock/roots duo supporting a new EP. 8:00 PM. Apr. 30: Monday Night Jazz & Blues. JEFF MERTICK & FRED FOERSTER w/ special guest Marie-Véronique Bourque. Soulful Regina bluesman in a special show showcasing songs from his brand new album, “Outrun The Sunrise.” 8:00 PM. May 2: Wednesday Night Folk. PETE EASTMURE Toronto singer/songwriter serves up Americana on his cross Canada tour! May 2: MONTHLY ALES MEETING. After conducting their 25th annual ALES Open national homebrewing competition, one of Canada’s most respected clubs gets right back into their regular schedule. This month’s presentation topics include; Trappist Ales and Barrel-Aging Techniques. Meetings are held on the first Wednesday of the month in the Bushwakker basement clubroom and begin at 8:00 PM. New members are always welcome. May 4: FIRST FIRKIN FRIDAY – Special “May the Fourth Be With You” Edition. Enjoy the pomp and circumstance of this long standing Bushwakker monthly tradition. A piper from the Regina Police Services Pipes and Drums leads a keg of special brew in a procession throughout the brewpub. A guest volunteer is selected to wield the handmade wooden maul affectionately referred to as The Mighty Firkin Wakker, and attempt to tap the firkin in one mighty blow. This May the fourth’s special offering will be a special Galaxy dry-hopped JED-IPA . The space opera suds-soaking experience takes place at 5:30 PM. May 5: BIG BREW DAY. The ALES Club and the Bushwakker Brewpub continue this longstanding tradition of celebrating craft beer at the grassroots level. Members of the club join Bushwakker head brewer, Michael Gaetz, and assistant brewer, Bradley Dalrymple, in brewing a special Imperial Brown Ale. May 5: BUSHWAKKER AT SAVOUR THE SOUTHEAST. Back for it's third edition at Affinity Place in Estavan, Saskatchewan. We make our debut at this popular Food, Wine, Beer, Spirit and Music Festival. 7:00 PM. May 7: Monday Night Jazz & Blues. THE MINISTRY OF GROOVE. 1970’s jazz funk and beyond. Love those horns! 8:00 PM. May 9: Wednesday Night Folk. FARMER THE BAND. Canadian-grown American folk act from southern B.C. 8:00 PM. May 14: Monday Night Jazz & Blues. BRIAN BAGGETT AND BEN WINOSKI. Chapman Stick master meets acoustic guitar whiz. One powerful duo! 8:00 PM. May 16: Wednesday Night Folk. SEAN PINCHIN. Ontario folk and bluesman on a cross Canada tour. 8:00 PM. May 17: THE EAGLES AT MOSAIC STADIUM. Be sure to stop by before, during or after the big concert to enjoy our HOTEL CALIFORNIA BURGER & A PINT feature. May 18: ANNUAL SCREAMIN’ MOSQUITO CHILI BEER RELEASE. Our hot pepper-infused blonde ale makes its annual return this weekend. We have partnered with local businessman, Tony Matharu at the India Food Centre in Regina to provide a selection of fresh spicy peppers that will showcase their unique flavours in addition to varying degrees of heat. The first pepper offering will a nice, easy introduction to the style and is one of our most popular offerings – the classic Serrano Pepper! Hurts so good! May 18, 19 & 20: MAY LONG WEEKEND KEG EVENT. What better way to celebrate the year’s first warm long weekend than with a Bushwakker keg? Receive free ice, cups, coasters and the use of a keg chiller tub with any May long weekend keg order. Four sizes of kegs are available for any gathering big or small. May 19: THE 3rd POET LAUREATE’S POETRY & A PINT PRESENTATION. The Saskatchewan Poet Laureate Program was the first provincial program of its kind in Canada. The Saskatchewan Arts Board, Saskatchewan Book Awards, and the Saskatchewan Writers’ Guild are partners in the program, which is under the patronage of the Lieutenant Governor. Enjoy a Saturday afternoon of poetry readings from some of Regina and area’s established and up-and-coming writers including: Brenda Schmidt (Poet Laureate of Saskatchewan), Bernadette Wagner, Chelsea Coupal, Gillian Harding-Russell, Randy Lundy and Shelly Banks. Perhaps enjoy a slice of our special limited edition Poetry Dessert! 3:00 PM – 4:00 PM. 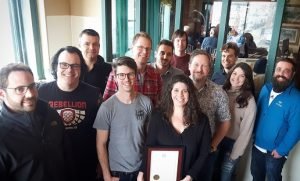 TIME OUT - The Ladies Room

A rather attractive woman goes up to the bar in a quiet rural pub. She gestures alluringly to the barman who comes over immediately. When he arrives, she seductively signals that he should bring his face close to hers. When he does so, she begins to gently caress his beard which is full and bushy. "Are you the manager?" she asks, softly stroking his face with both hands. "Actually, no" he replies. "Can you get him for me? I need to speak to him." she asks, running her hands up beyond his beard and into his hair. "I'm afraid I can't" breathes the barman - clearly aroused. "Is there anything I can do?" "Yes there is. I need you to give him a message" she continues huskily, popping a couple of fingers into his mouth and allowing him to suck them gently. "Tell him" she says "that there is no toilet paper or hand soap in the ladies room."