NEWS FROM THE BREWERY! Head brewer, MICHAEL GAETZ, reports our seasonally available PICKARD’S OATMEAL CREAM STOUT, ARCTIC DARK MUNICH DUNKEL, SASKADIAN BLACK IPA and BLOOD ORANGE BLONDE ALE are now on tap and in our offsale. A batch of BREW & GOLD DORTMUNDER, CHINOOK ESB, BARON BOCK and HARBINGER MAIBOCK are also currently working their way through the brewery. Our guest tap is currently pouring a keg of Hop Tart from Regina’s Malty National Brewery in collaboration with Regina’s Pile O’ Bones Brewery. Next up is the Batch 88 Oyster Stout from the Prairie Sun Brewery in Saskatoon. This will be followed by a Winter Sour from Nokomis Craft Ales. Our premium wines for the month of April are from the Bodacious Winery in Ontario. The red is a Shiraz and the white is a Pinot Grigio. Both are $6.95 for a glass and $17.95 for a half litre. Our Cheryl’s Blonde Ale is now available for growler fills at the Quance Street SLGA store in Regina. Three other fine Saskatchewan craft beers are also available. Enjoy them for a limited time! BUSHWAKKER  BREWER’S  DINNER  TICKETS OVER 90% SOLD Our signature brewing and culinary event will be held on Saturday, April 14th at 7:00 PM. Enjoy a fabulous multi-course meal in which each course is prepared with a unique beer style and paired with a different beer to enhance the flavours of each dish. This year’s menu will serve as a tribute to the late Bushwakker co-founder and president, Bev Robertson, and will feature some of his favourite dishes. Tickets only $60.00 each. Cutting-edge beer cuisine awaits! The Bushwakker Local Artist Wall features the works of CRISTIAN BARRENO for the month of April. Cristian is originally from Guatemala and moved to Regina 16 years ago. He has been painting for almost 21 years and his work has evolved from painting the people and landscapes of Guatemala to a blend of multiculturalism and fantasy due the wide perspective he has gained from living in Canada. He paints predominantly with acrylics and oils and he often explores new themes or techniques in each of his pieces. To learn more about Cristian and his work, visit www.cristianbarreno.com. 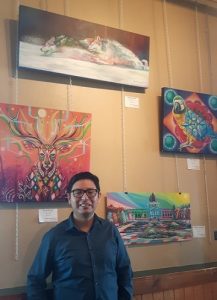 Apr. 9 – 14: The ALES OPEN. One of the nation’s largest homebrewing competitions takes place in the Bushwakker basement clubroom all this week! Apr. 14: Annual Bushwakker Brewer’s Dinner. Less than ten tickets remain. $60.00 each. 7:00 PM. Apr. 16: Monday Night Jazz & Blues. THE JAZZ BAND-ITS. The largest band to ever grace our stage plays big band, jazz and swing. 8:00 PM. Apr. 18: Wednesday Night Folk. SPRING SINGER/SONGWRITER SHOWCASE. Veteran guitarsmith Neil Child is joined by new talents including Nathan Davis, Latrell Redwood, Dillan McNab, Cory Baldwin, Devon Floyd, Regan Hinchcliffe, Trent Leggot and Jay Green. 8:00 PM. Apr. 19: HEALTH SCIENCE PUB presented by the Integrated Health Research Cluster. Working up an Appetite: Rethinking the Battle of the Bulge. Our wildly popular Science Pub Series has returned for a sixth incredible season! Enjoy lectures on scientific topics of general interest in our Arizona Room (main floor banquet room) over beer and snacks. The room opens at 5:00 PM and quite often is full by 6:00 PM. Avoid disappointment and come down early for dinner and a pint before the presentation which begins at 7:00 PM. This month's lecture will be presented by Dr. Totosy de Zepetnek, Assistant Professor of Kinesiology and Health Studies at the University of Regina. We live in a society obsessed with weight loss and this has significant health implications. Weight gain or loss is depends on the relationship between how much energy (i.e. food) is taken in and how much is expended through exercise or other activities. For too many of us we consume more energy than we expend and it gets stored as fat, or weight gain. And because of the health risks associated with that weight gain there is an increasing reliance on appetite suppressants rather than on trying to find a balance between our intake and our activity.  The talk will focus on some of the effects of energy imbalance and how individuals can avoid the battle of the bulge.  Dr. Totosy de Zepetnek (Assistant Professor of Kinesiology and Health Studies) does research on cardiovascular health and energy balance. 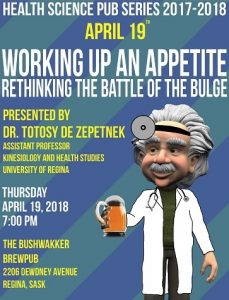 Masters of Their Craft: The Making of a Robust Beer Industry in the Greater Regina Area Regina Craft Brewing Advantage:

The inventor of the Harley-Davidson motorcycle, Arthur Davidson, died and went to heaven.  At the pearly gates, St. Peter told Arthur, "Since you've been such a good man and your motorcycles have changed the world, your reward is, you can hang out with anyone you want in Heaven." Arthur thought about this for a minute and then said, "I want to hang out with God."  St. Peter took Arthur to the Throne Room and introduced him to God.  God recognized Arthur and commented, "Okay, so you were the one who invented the Harley Davidson motorcycle?"  Arthur said, "Yep, that's me." God said, "Well, what's the big deal in inventing something that's pretty unstable, makes noise and pollution and can't run without a road?"  Arthur was apparently embarrassed, but finally he said, "Excuse me, but aren't you the inventor of woman?" God said, "Yes." Arthur paused and said, "Well, professional to professional, you have some major design flaws in your invention: there's too much inconsistency in the front-end protrusions, it chatters constantly at high speeds, most of the rear ends are too soft and wobble too much, the intake is placed way too close to the exhaust, and the maintenance costs are enormous!" God looked upon Arthur and said, "Hmmmmm, you have some good points there, hold on.” God went to His Celestial super computer, typed in some key words and waited for the results. The computer printed out a slip of paper and God read it. "Well, it may be true that my invention is flawed," God said to Arthur, "but according to these statistics, more men are riding my invention than yours."