NEWS FROM THE BREWERY! Head brewer, MICHAEL GAETZ, reports our seasonally available PICKARD’S OATMEAL CREAM STOUT, ARCTIC DARK MUNICH DUNKEL, SASKADIAN BLACK IPA and BLOOD ORANGE BLONDE ALE are now on tap and in our offsale. A batch of BREW & GOLD DORTMUNDER, CHINOOK ESB, BARON BOCK and HARBINGER MAIBOCK are also currently working their way through the brewery. Our guest tap is currently pouring a keg of dry-hopped Saison from Swift Current’s Black Bridge Brewery. Next up is the Hop Tart from Regina’s Malty National Brewery. This will be followed by Batch 88 Oyster Stout from the Prairie Sun Brewery in Saskatoon. Our premium wines for the month of April are from the Bodacious Winery in Ontario. The red is a Shiraz and the white is a Pinot Grigio. Both are $6.95 for a glass and $17.95 for a half litre. Our Cheryl’s Blonde Ale is now available for growler fills at the Quance Street SLGA store in Regina. Three other fine Saskatchewan craft beers are also available. Enjoy them for a limited time! ANNUAL  BUSHWAKKER  BREWER’S  DINNER  TICKETS OVER  80%  SOLD  OUT! Our signature brewing and culinary event will be held on Saturday, April 14th at 7:00 PM. Enjoy a fabulous multi-course meal in which each course is prepared with a unique beer style and paired with a different beer to enhance the flavours of each dish. This year’s menu will serve as a tribute to the late Bushwakker co-founder and president, Bev Robertson, and will feature some of his favourite dishes. Tickets only $60.00 each. Cutting-edge beer cuisine awaits! 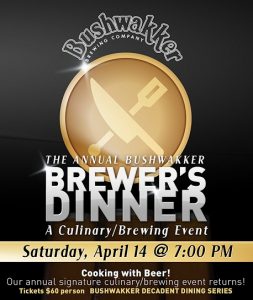 Apr. 6: FIRST FIRKIN FRIDAY - SPECIAL SASKATCHEWAN CRAFT BREWING WEEK PROCLAMATION EDITION. The pomp and circumstance surrounding this long-time Bushwakker monthly tradition will be elevated to a new level this month. A small keg of the second collaborative offering from the Saskatchewan Craft Brewers Association will be carried throughout the pub in a procession led by a piper from the Regina Police Service Pipes & Drums. The ale is a single malt and single hop (S.M.A.S.H.) beer incorporating 100% two-row pale malted barley from Saskatchewan's newest maltster, Maker's Malt, located near Rosthern, Saskatchewan. The hop variety used was sourced from Northwest Hop Farms and is a relatively new German offering called Hallertau Blanc which imparts a flowery-fruity aroma with passion fruit, grapefruit, gooseberry and pineapple characteristics. The beer was brewed in early March at Nokomis Craft Ales in Nokomis, Saskatchewan where the 13 SCBA craft brewery members from across the province met to participate in the brew day. The honourary firkin tapper will be Mary Taylor-Ash, CEO of Tourism Saskatchewan who has been selected to wield the handmade wooden maul affectionately named, The Mighty Firkin Wakker, and attempt to tap the firkin in one mighty blow. The Government of Saskatchewan will be proclaiming the week of April 7-14  as the first  official observance of Saskatchewan Craft Brewing Week.  There will be many craft beer events taking place throughout the province to celebrate the week. The special suds-soaking experience takes place at 5:30 PM. Apr. 9: Monday Night Jazz & Blues. ‘ROUND MIDNIGHT. Popular veteran Regina act plays popular jazz. 8:00 PM. Apr. 11: Wednesday Night Folk Night Special Edition – REDBEARD’S BIRTHDAY BASH. Join Regina’s #1 live music ambassador in his birthday celebration. Two great local live acts will take the stage including: Ava Wild and The Desjarlais Brothers. Redbeard’s Signature Chocolate Cheesecake with caramel sauce will be available. 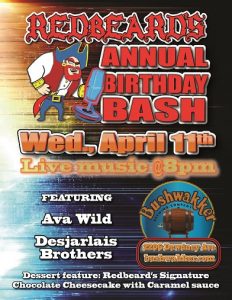 Apr. 9 – 14: The ALES OPEN. One of the nation’s largest homebrewing competitions takes place in the Bushwakker basement clubroom all this week! Apr. 14: Annual Bushwakker Brewer’s Dinner. Our signature brewing and culinary event returns! Four fabulous courses each utilizing beer as an ingredient and paired with a unique beer to enhance the flavours of each dish. This year’s menu is a tribute to the late Bushwakker co-founder and president, Bev Robertson, and will feature some of his favourite dishes. Tickets $60.00. 7:00 PM. Apr. 16: Monday Night Jazz & Blues. THE JAZZ BAND-ITS. The largest band to ever grace our stage plays big band, jazz and swing. 8:00 PM. Apr. 18: Wednesday Night Folk. SPRING SINGER/SONGWRITER SHOWCASE. Veteran guitarsmith Neil Child is joined by new talents including Nathan Davis, Latrell Redwood, Dillan McNab, Cory Baldwin, Devon Floyd, Regan Hinchcliffe, Trent Leggot and Jay Green. 8:00 PM. Apr. 19: HEALTH SCIENCE PUB presented by the Integrated Health Research Cluster. Working up an Appetite: Rethinking the Battle of the Bulge. Our wildly popular Science Pub Series has returned for a sixth incredible season! Enjoy lectures on scientific topics of general interest in our Arizona Room (main floor banquet room) over beer and snacks. The room opens at 5:00 PM and quite often is full by 6:00 PM. Avoid disappointment and come down early for dinner and a pint before the presentation which begins at 7:00 PM. This month's lecture will be presented by Dr. Totosy de Zepetnek, Assistant Professor of Kinesiology and Health Studies at the University of Regina. We live in a society obsessed with weight loss and this has significant health implications. Weight gain or loss is depends on the relationship between how much energy (i.e. food) is taken in and how much is expended through exercise or other activities. For too many of us we consume more energy than we expend and it gets stored as fat, or weight gain. And because of the health risks associated with that weight gain there is an increasing reliance on appetite suppressants rather than on trying to find a balance between our intake and our activity.  The talk  will focus on some of the effects of energy imbalance and how individuals can avoid the battle of the bulge.  Dr. Totosy de Zepetnek (Assistant Professor of Kinesiology and Health Studies) does research on cardiovascular helath and energy balance.   Apr. 23: Monday Night Jazz & Blues. A STORRY WITH HUGHES.  Acoustic Blues duo featuring Billy Hughes and Jeff Storry. 8:00 PM. Apr. 25: Wednesday Night Folk. DALE MAC. Regina based mainstream alternative/rock/roots duo supporting a new EP. 8:00 PM. Apr. 30: Monday Night Jazz & Blues. JEFF MERTICK & FRED FOERSTER w/ special guest Marie-Véronique Bourque. Soulful Regina bluesman in a special show showcasing songs from his brand new album, “Outrun The Sunrise.” 8:00 PM.

MacGregor woke up after the annual office party with a hammering headache, cotton-mouthed and utterly unable to recall the events of the previous evening. After a trip to the bathroom, he made his way downstairs, where his wife Agnes put some coffee in front of him. “Agnes,” he moaned, “tell me what happened last night. Was it as bad as I think?” “Even worse,” Agnes said, her voice smelling of scorn. “You made a complete ass of yourself. You succeeded in antagonizing the entire board of directors and you insulted the president of the company, right to his face.” “He’s an a**hole,” MacGregor said. “Piss on him.” “You did,” Agnes answered. “And he fired you.” “Well, screw him!” said MacGregor. Agnes answered; “I did. You’re back at work on Monday.”