NEWS FROM THE BREWERY! Head brewer, MICHAEL GAETZ, reports our seasonally available PICKARD’S OATMEAL CREAM STOUT, ARCTIC DARK LAGER, SASKADIAN BLACK IPA and BUSHVAR CZECH PILS are now on tap. His newest fruit beer offering, BLACKBERRY PORTER, is running low and the very popular BLOOD ORANGE BLONDE will soon return. A batch of BREW & GOLD DORTMUNDER and CHINOOK ESB are also currently working their way through the brewery. Our guest tap is currently pouring a keg of the Surreal Cinnamon Toast Crunch and Cardamom Tea Pale Ale from Regina’s Malty National Brewing. This will be followed by the White Blaze White IPA from the Prairie Sun Brewery and then a Foreign Extra Stout from 9 Mile Legacy Brewing. Our premium wines for the month of March are from South Africa. The red is The Grinder Blue Moose Cabernet/Shiraz; $8.95 for a glass and $23.95 for a half litre. The white is Wild Olive Old Vine Chenin Blanc; $7.95 for a glass and $21.95 for a half litre. Our DUNGARVON IRISH RED ALE is now available for growler fills at the Quance Street SLGA store in Regina. Three other fine Saskatchewan craft beers are also available. Enjoy them for a limited time! Prairie Dog Magazine’s Best of Food and Drink 2018.  Voting began March 13th! Regina's dynamic local food & beverage scene is highlighted in this popular reader poll and contest. Last year Bushwakker took home quite a few awards and this year we are nominated in 15 categories. We look forward to more friendly food and drink fun with your continued enthusiastic support at: http://www.prairiedogmag.com/best-of-food-2018/#// 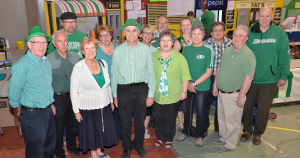 Huge acoustic Celtic act, Billarney, performs at The Bushwakker St. Patrick’s Day Party. Mar. 17: ST. PATRICK’S DAY PARTY. The big annual Irish celebration falls on a Saturday this year! Enjoy Irish entertainment including a performance from The Prairie Gael School of Irish Dance, The Regina Police Services Pipes & Drums, and traditional reels from 20 piece acoustic Celtic act, Billarney. Delicious Irish food offerings include the return of the very popular All-Day Irish Breakfast featuring black and white pudding as well as Lamb Stew with soda bread, house-made Corned Beef & Cabbage, Colcannon Soup and Bailey’s Irish Cream Cheesecake with Jameson Irish whiskey chocolate sauce. Partake in our Battle of The Irish Stouts by enjoying a Guinness or an O’Hara’s Irish stout. Enjoy a Magner’s Irish Cider or even very rare dram of Teeling Brabazon Port Wood Finish Single Malt Irish Whiskey! Our Green Shamrock Ale will be flowing on tap too! Bushwakker head brewer, Michael Gaetz will create a delicious firkin of our very popular Irish Coffee Oatmeal Cream Stout which will be tapped at 5:30 PM to kick-off the big night! $5 cover charge begins at 4:30 PM. Mar. 18: ANNUAL BUSHWAKKER BREWER’S DINNER TICKETS GO ON SALE AT NOON! Our signature brewing and culinary event will be held on Saturday, April 14th at 7:00 PM. Enjoy a fabulous multi-course meal in which each course is prepared with a unique beer style and paired with a different beer to enhance the flavours of each dish. This year’s menu will serve as a tribute to the late Bushwakker co-founder and president, Bev Robertson, and will feature some of his favourite dishes. Including: Smoked Trout Trappist Salad, Vienna New Brunswick Vienna Bouillabaisse, Gold Medal Portered Beef Short Ribs, and Chocolate Milk Stout Lava Cake. Tickets only $60.00 each. Cutting-edge beer cuisine awaits! 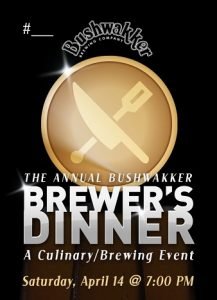 Mar. 19: Monday Night Jazz & Blues. ‘ROUND MIDNIGHT. Veteran act plays popular jazz and adult contemporary tunes. 8:00 PM. Mar. 21: Wednesday Night Folk. THE STRANGE VALENTINES. AN Australian and a Nova Scotian sing about the jerks in the world. 8:00 PM. Mar. 24. THE SASK SAMPLER. The biggest Bushwakker Folk Night of the year! Up-and-coming folk artists from across the province strut their stuff are vying for a spot on the Regina Folk Festival, Ness Creek Music Festival and Gateway Music Festival stages. This year’s performers include:Ellen Froese, Taylor Jade, Billy Bean, respectfulchild, Xandrah, and Sun Cliffs. It's not Folk Band Warz but it is a great night of Saskatchewan musical talent. $10 cover charge in effect. 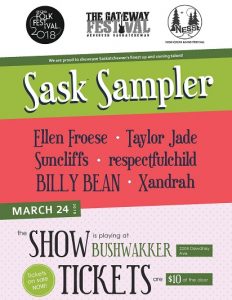 In a court in Killarney, deep in Munster, Ireland, this conversation is reported to have taken place: Lawyer: “At the scene of the accident, Mr O'Shea, did you tell the Garda officer that you had never felt better in your life?” O'Shea the farmer: “That's right, sir.” Lawyer: “Well then, Mr O'Shea, how is it that you are now claiming you were seriously injured when my client's car hit your cart?” O'Shea the farmer: “When the Garda arrived, he went over to my horse, who had a broken leg, and shot him. Then he went over to Darcy, my dog, who was badly hurt, and shot him. Then the policeman came across the road, gun still in hand, looked at me, and said, 'How are you feeling?'  I just thought under the circumstances, it was a wise choice of words to say: “I've never felt better in my life.”