NEWS FROM THE BREWERY! Head brewer, MICHAEL GAETZ, reports our biennial, big and malty Scottish Ale, MACGREGOR’S WEE HEAVY, is on tap and in our offsale as is our seasonally available SASKADIAN BLACK IPA and BUSHVAR CZECH PILS. His newest fruit beer offering, BLACKBERRY PORTER, is now half gone. A batch of PICKARD’S OATMEAL CREAM STOUT, ARCTIC DARK LAGER, BREW & GOLD DORTMUNDER and CHINOOK ESB are also currently working their way through the brewery. Our guest tap is currently pouring a keg of Rye Pale Ale from Nokomis Craft Ales. Our "Hop Parade" then continues with the Ella Australia IPA from 9 Mile Legacy Brewing. This will be followed by the Surreal Cinnamon Toast Crunch and cardamom tea Pale Ale from Regina’s Malty National Brewing. Our premium wines for the month of March are from South Africa. The red is The Grinder Blue Moose Cabernet/Shiraz; $8.95 for a glass and $23.95 for a half litre. The white is Wild Olive Old Vine Chenin Blanc; $7.95 for a glass and $21.95 for a half litre. Our DUNGARVON IRISH RED ALE is now available for growler fills at the Quance Street SLGA store in Regina. Three other fine Saskatchewan craft beers are also available. Enjoy them for a limited time! Prairie Dog Magazine’s Best of Food and Drink 2018.  Voting begins March 13th! Regina's dynamic local food & beverage scene is highlighted in this popular reader poll and contest. Last year Bushwakker took home quite a few awards and we look forward to more friendly food and drink fun with your continued enthusiastic support at: http://www.prairiedogmag.com/best-of-food-2018/#// The Bushwakker Local Artists Wall for the month of March features the works of Bruno Hernani. Bruno is a Peruvian-born artist and an engineer. He has lived in Canada for more than 10 years to pursue further studies and professional experience. Bruno’s art is influenced by his passion for engineering, music and the environment. He focuses on the integration of these disciplines to create new structures and patterns that are in agreeable armory with reality. He emphasizes the use of numbers and geometry as mechanism to connect different forms and languages. Enjoy his vibrant and colourful work all this month! 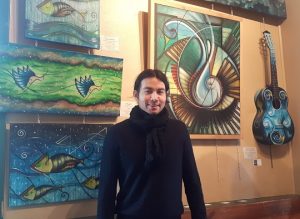 Mar. 12: Monday Night Jazz & Blues. THE U OF R JAZZ BAND. They won’t be back until next fall. Don’t miss hearing Regina’s future jazz stars! 8:00 PM. Mar. 14: Wednesday Night Folk. THE RED WAGON GYPSIES. Acapella/acoustic harmonies from Angela Ell and Tamara Scrimbit. It doesn’t get more “folkier” than this! 8:00 PM. Mar. 15: SCIENCE PUB. An Imminent Post-Antibiotic Apocalypse? A look at non-conventional approaches to drug discovery. Our wildly popular Science Pub Series has returned for a sixth incredible season! Enjoy lectures on scientific topics of general interest in our Arizona Room (main floor banquet room) over beer and snacks. The room opens at 5:00 PM and quite often is full by 6:00 PM. Avoid disappointment and come down early for dinner and a pint before the presentation which begins at 7:00 PM. This month's lecture will be presented by Dr. John Stavrinides, Department of Biology, University of Regina. Until recently, a variety of antibiotics were available to treat even the most aggressive infections; however, the increase in multi-drug resistance has resulted in many antibiotics becoming useless against clinically relevant bacterial pathogens. Because of this, many of these bacteria are now a serious threat to human health, with some predicting an imminent post-antibiotic apocalypse. This talk will examine several current strategies for overcoming drug resistance, including our recent research on non-naturally occurring synthetic antibiotics. Non-conventional antibiotics and novel drug discovery approaches will be needed if we hope to regain the upper hand in the fight against drug-resistant bacteria. Mar. 17: ST. PATRICK’S DAY PARTY. The big annual Irish celebration falls on a Saturday this year! Enjoy Irish entertainment including a performance from The Prairie Gael School of Irish Dance, The Regina Police Services Pipes & Drums, and traditional reels from 20 piece acoustic Celtic act, Billarney. Delicious Irish food offerings include the return of the very popular All-Day Irish Breakfast featuring black and white pudding as well as Lamb Stew with soda bread, house-made Corned Beef & Cabbage, Colcannon Soup and Bailey’s Irish Cream Cheesecake with Jameson Irish whiskey chocolate sauce. Partake in our Battle of The Irish Stouts by enjoying a Guinness or an O’Hara’s Irish stout. Enjoy a Magner’s Irish Cider or even very rare dram of Teeling Brabazon Port Wood Finish Single Malt Irish Whiskey! Our Green Shamrock Ale will be flowing on tap too! Bushwakker head brewer, Michael Gaetz will create a delicious firkin of our very popular Irish Coffee Oatmeal Cream Stout which will be tapped at 5:30 PM to kick-off the big night! $5 cover charge begins at 4:30 PM. Mar. 18: ANNUAL BUSHWAKKER BREWER’S DINNER TICKETS GO ON SALE AT NOON! Our signature brewing and culinary event will be held on Saturday, April 14th at 7:00 PM. Enjoy a fabulous multi-course meal in which each course is prepared with a unique beer style and paired with a different beer to enhance the flavours of each dish. This year’s menu will serve as a tribute to the late Bushwakker co-founder and president, Bev Robertson, and will feature some of his favourite dishes. Including: Smoked Trout Trappist Salad, Vienna New Brunswick Bouillabaisse, Gold Medal Portered Beef Shortribs, and Chocolate Milk Stout Lava Cake. Tickets $60.00 each. Cutting-edge beer cuisine awaits! Mar. 19: Monday Night Jazz & Blues. ‘ROUND MIDNIGHT. Veteran act plays popular jazz and adult contemporary tunes. 8:00 PM. Mar. 21: Wednesday Night Folk. THE STRANGE VALENTINES. An Australian and a Nova Scotian sing about the jerks in the world. 8:00 PM. Mar. 24. THE SASK SAMPLER. The biggest Bushwakker Folk Night of the year! Up-and-coming folk artists from across the province strut their stuff are vying for a spot on the Regina Folk Festival, Ness Creek Music Festival and Gateway Music Festival stages. This year’s performers include: Ellen Froese, Taylor Jade, Billy Bean, respectfulchild, Xandrah, and Sun Cliffs. It's not Folk Band Warz but it is a great night of Saskatchewan musical talent. $10 cover charge in effect. Mar 26: Monday Night Jazz & Blues. RESONANCE. Powerful duo featuring vocalist, Christie-Anne Blondeau and bassist, Fred Foerster. 8:00 PM Mar. 28: Wednesday Night Folk. REGINA SONGWRITERS GROUP (A Regional Group of the Songwriters Association of Canada) & SASK MUSIC PRESENTS. Local singer/songwriters; Jaecy Bells, Scott Anthony Andrews, and James Gates. 8:00 PM.

by Erin Wallace Philadelphia, PA, — Pink Boots Collaborative Brew Day was derived from members wanting to take part in International Women’s Day by raising the profile of women’s roles in the beer industry. Chapters and members of Pink Boots get together with supporting breweries and brew their version of the selected beer style. Proceeds from the sale of the collaborative brew is donated to the Pink Boots Society, which is applied to educational scholarships for its members. The local Philadelphia Chapter has been brewing on March 8th for the past two years. “Each year we have picked a brewery to work with and every year the number of women participating has grown. This year we are hosting our largest brew day yet with five area breweries and a University hosting brew days” says Erin Wallace, President of the Philadelphia Chapter of Pink Boots Society. The National Chapter selects the style of beer, with each chapter/ brewery coming up with their own version of that style. This year the Pink Boots Society teamed up with YCH Hops to create a special hop blend for each chapter to brew with. Free Will brewing is hosting the largest brew day, which is open to any women who works for in the beer industry. Their beer “Tenenit”, named after the Egyptian goddess of beer & brewing, will be a 6.5% IPA. Sly Fox Brewing will be hosting a brew day for all their female employees. They will be brewing a hoppy American wheat ale. This year three New Jersey breweries will be participating. Zed’s Brewery has opened their brew day to women from their local homebrew club, Barley Legal. They will be brewing “Zed’s in Boots – PBS 45”, a pale ale coming in at 5% and 45IBUs. Eight and Sand Beer Company in Woodbury will be brewing “Nevertheless She Brewsisted” a dry hopped kettle sour ale. Czig Meister Brewing Company of Hackettstown, will be brewing four beers for a special Pink Boots Flight. Each beer will be a different style highlighting the Pink Boots Hop Blend. They are brewing a New England IPA with Hibisucs and Rose Hips, a Dessert Berlinerweise with Guava, Lactose & Vanilla, a hoppy Kolsch and a Belgian Double IPA. The women of the Brewing Science Program at the University of Sciences will also be hosting a brew day. The different beers are expected to be release between the end of March and beginning of April. Portions of the proceeds will be donated to the Pink Boots Scholarship Fund. Sales from the Pink Boots Hop Blend will help amplify the fundraising power of this year’s collaborations. “In the past two years we have had several local women awarded Pink Boots Scholarships,” said Erin, “ which in turn has helped them receive promotions, raises and furthering their careers in the beer industry.” 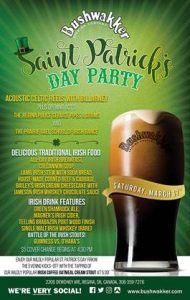 Paddy and Sean are planning to go out on St. Patricks Day, but only have 50 cents between them. Paddy has an idea, he takes the 50 cents and goes to a butchers and buys a sausage. Sean is really pissed off at first that Paddy spent their last money on a sausage, but Paddy lets him in on his plan. "We are going into the next pub, order two pints, drink them and when it comes to paying you go down on your knees, unzip my trousers, pull the sausage out and start sucking on it." So, they go into the first pub and do exactly as Paddy suggested. The barmaid is disgusted by the sight and kicks the two out. Paddy says,"See it works, we didn't pay did we?" As Paddy's plan seems to be working they carry on doing it. In the 12th pub, both are quite drunk by now, Sean isn't looking too good. They have just finished their pints. Sean: complains, "I can't do this anymore Paddy, my bloody knees are hurting!" Paddy calmly replies, "No worries...I lost that bloody sausage in the third pub!"