NEWS FROM THE BREWERY! Head brewer, MICHAEL GAETZ, reports our biennial, big and malty Scottish Ale, MACGREGOR’S WEE HEAVY, is on tap and in our offsale as is our seasonally available SASKADIAN BLACK IPA and BUSHVAR CZECH PILS. His newest fruit beer offering, BLACKBERRY PORTER, is now half gone. A batch of PICKARD’S OATMEAL CREAM STOUT, ARCTIC DARK LAGER, BREW & GOLD DORTMUNDER and CHINOOK ESB are also currently working their way through the brewery. Our guest tap is currently pouring a keg of Mad Hopper IPA from Saskatoon’s Prairie Sun Brewery. Next up is a Rye Pale Ale from Nokomis Craft Ales. Our "Hop Parade" then continues with the Ella Australia IPA from 9 Mile Legacy Brewing. Our premium wines for the month of March are from South Africa. The red is The Grinder Blue Moose Cabernet/Shiraz; $8.95 for a glass and $23.95 for a half litre. and the white is Wild Olive Old Vine Chenin Blanc; $7.95 for a glass and $21.95 for a half litre. Our DUNGARVON IRISH RED ALE is now available for growler fills at the Quance Street SLGA store in Regina. Three other fine Saskatchewan craft beers are also available. Enjoy them for a limited time! Prairie Dog Magazine’s Best of Food and Drink 2018.  The nomination process continues until March 5th! Regina's dynamic local food & beverage scene is highlighted in this popular reader poll and contest. Last year Bushwakker took home quite a few awards and we look forward to more friendly food and drink fun with your continued enthusiastic support at:  http://www.prairiedogmag.com/best-of-food-2018/#//

Mar. 2: FIRST FIRKIN FRIDAY. Enjoy the pomp and circumstance of this long standing Bushwakker monthly tradition. A piper from the Regina Police Services Pipes and Drums leads a keg of special brew in a procession throughout the brewpub. A guest volunteer is selected to wield the handmade wooden maul affectionately referred to as The Mighty Firkin Wakker, and attempt to tap the firkin in one mighty blow. This month’s offering will be a special “sneak peek” at our upcoming seasonally available Munich Dunkel, ARCTIC DARK LAGER. The delicious beer and suds-soaking experience takes place at 5:30 PM. Mar. 3: ANNUAL SATURDAY AFTERNOON BLUES SHOWCASE. Presented in conjunction with The Regina Delta Blues Association and the 24TH Mid-Winter Blues Festival Week, the free Saturday afternoon showcase is our biggest blues event of the year! Enjoy three local blues acts on the Bushwakker stage including: Shane & Levi Reoch, Billy Hughes & Jeff Storrey, and Son Howler. Hosted by Jeff “Redbeard” Corbett of 91.3 FM CJTR Regina Community Radio. Perhaps try a slice of his signature Redbeard’s Chocolate-Chocolate Cheesecake! 1:15 PM – 4:30 PM. Mar. 5: Monday Night Jazz & Blues. PERIPHERAL VISION. Juno-nominated jazz quartet from Toronto on a cross Canada tour! 8:00 PM. Mar. 7: Wednesday Night Folk. SUN ZOOM SPARX. Will be interesting! Funk, jazz fusion, psychedelia and mid-70’s ambience. 8:00 PM. Mar. 7: MONTHLY ALES MEETING. If you are looking to improve your skills as a homebrewer or just want to sit in a room filled with people with a passion for creating great beer in the basement, then the ALES Club is for you! This month’s topic of discussion is English Bitters. Meetings are held in the Bushwakker basement clubroom on the first Wednesday of each month at 8 PM.  New members are always welcome. Mar. 12: Monday Night Jazz & Blues. THE U OF R JAZZ BAND. They won’t be back until next fall. Don’t miss hearing Regina’s future jazz stars! 8:00 PM. Mar. 14: Wednesday Night Folk. THE RED WAGON GYPSIES. Acapella/acoustic harmonies from Angela Ell and Tamara Scrimbit. It doesn’t get more “folkier” than this! 8:00 PM. Mar. 15: SCIENCE PUB. An Imminent Post-Antibiotic Apocalypse? A look at non-conventional approaches to drug discovery. Our wildly popular Science Pub Series has returned for a sixth incredible season! Enjoy lectures on scientific topics of general interest in our Arizona Room (main floor banquet room) over beer and snacks. The room opens at 5:00 PM and quite often is full by 6:00 PM. Avoid disappointment and come down early for dinner and a pint before the presentation which begins at 7:00 PM. This month's lecture will be presented by Dr. John Stavrinides, Department of Biology, University of Regina. Until recently, a variety of antibiotics were available to treat even the most aggressive infections; however, the increase in multi-drug resistance has resulted in many antibiotics becoming useless against clinically relevant bacterial pathogens. Because of this, many of these bacteria are now a serious threat to human health, with some predicting an imminent post-antibiotic apocalypse. This talk will examine several current strategies for overcoming drug resistance, including our recent research on non-naturally occurring synthetic antibiotics. Non-conventional antibiotics and novel drug discovery approaches will be needed if we hope to regain the upper hand in the fight against drug-resistant bacteria. 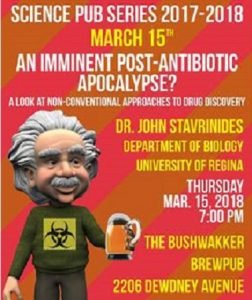 The Biochemistry of Beer: Why the Source of Sugar Matters

Biochemistry is getting you buzzed! By Pete Brown Our eventual unraveling of the magic of alcohol was delayed by the fact that biology and chemistry look at the world in quite different ways. It was only by looking at both that people were finally able to explain the process of fermentation, by which yeast ingests sugar and excretes alcohol and carbon dioxide. This is one of the simplest and oldest biochemical processes on the planet. But before that transformation is possible, you need the sugar itself. Sugar is one of the most important substances in nature. The competition for it, the complex interplay of plants, animals and microscopic fungi, ultimately gives us alcohol. So to fully understand fermentation we have to start with the source of that sugar. The kind of plant it comes from is the basis of the distinction between beer and other drinks. Plants absorb water and carbon dioxide, and with the helping hand of sunlight and a few enzymes convert these into oxygen and sugar, via the process of photosynthesis. This simple process is the source of all the sugar in the world. It’s how plants live, and it starts the food chain that keeps animals alive. Run the program for long enough, and the plants that don’t get eaten ultimately become the source of all our fossil fuels, too. This means the demand for sugar in nature often exceeds supply. This may be hard to believe when you look at the ever-expanding waistlines of the developed world, but sugar in nature is a scarce resource and, historically, the most sugary foods are the hardest to obtain and the most difficult to make. The domestication and refining of sugar goes back thousands of years, but in the West we’ve only been adding refined sugar to everything since the eighteenth century. Plants create sugar so they can grow, and, at certain stages, so they can make fruit or seeds to give birth to new plants that ensure the survival of the species. A new seed cannot photosynthesize and create its own energy until it has grown leaves or shoots, and, usually, roots to anchor it in place and draw other nutrients from the soil. So the parent packs up its seed with an abundant source of sugar to help the baby plant survive and grow until it’s big and strong enough to create its own sugar. There’s an important difference in how grain and fruit do this. Sometimes, the fruit or kernel surrounding the plant embryo has a cleverly customized role. If you’re a tree, you don’t want your kids settling too close or else you’ll  soon be competing for nutrients and  sunlight.  So, many fruits have evolved a symbiotic relationship with animals. They attract wandering beasts or insects with sugary, aromatic flavor compounds. Animals find the fruit nutritious to eat, then carry the indigestible seeds away from the tree and deposit them in a fertile pile of manure some distance away. If this doesn’t happen quickly enough, microorganisms will swoop in, and, when the fruit starts to rot, they’ll claim the sugar for themselves. Yeast is everywhere, especially in hot summers when fruit is ripening, and it’s always ready to claim vulnerable parcels of fermentable sugars. When it digests sugar it creates carbon dioxide and alcohol as by-products, a process which we refer to as fermentation. This is a wonderful result for humans and other higher order mammals, but not so great for the seeds that are left on the floor to die without their food parcels. Grain is, in some ways, much cleverer than fruit, and has built sophisticated defenses against yeast. Because it’s smaller and lighter, it can be blown by the wind and doesn’t need as much distance from the parent plant, so it doesn’t have to put itself on show the same way apples or cherries do. And that means it can be smarter about how it packages the sugar for its offspring. Grains such as barley are like armour-plated, souped-up alternatives to fruit. A grain kernel, when it is ready to leave the plant, has a skin so hard no microbe or insect can get through it — even humans have to employ stone or metal mills if we want to crush the outer shell of a grain efficiently. And even if we succeed in doing that, the fuel within has further levels of protection: it’s stored not as simple sugar, but as long-chain starch molecules that are too big for microorganisms to attack. If a sugar molecule is a brick, starch is a wall. When the unstoppable force of yeast meets the immovable object of mature barley grains, nothing happens. And so, some of the simplest and some of the most complicated organisms on Earth form an unholy alliance to separate the barley embryo for its sugary stash. Humans harvest and modify the grains to allow yeast to attack the sugars, and in return the yeasts create the alcohol humans love. Of course, the yeast can’t even know of or comprehend the existence or role of its human partners in crime. And for most of the time we’ve been doing this we’ve had no idea we were collaborating with yeasts either. We were in an alliance in which neither party knew the other existed. While on the human side we sort of knew what we were doing, we had no idea how, or why, it worked. We’ve been converting barley by “malting” it before brewing for thousands of years. We’ve known why we’re doing so for less than two hundred. 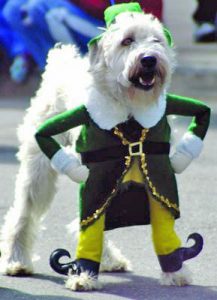 St. Patrick’s Day falls on a Saturday this year. “Everyone and their dog” will be at The Bushwakker!

- People get 10,000 words per month. If you reach the limit, you can't    physically speak until the new month begins. Anytime I was especially talkative, dad would say, "Careful now, I have to think you are up over 9,000 by now." That would shut me right up. - When I was little, my dad told me that Pulp Fiction was a documentary on oranges because he didn't want me to watch it. - I told my kids that if they didn't behave in the drive-thru lane, they'd get  a Sad Meal. - When we went to the store my mom used to tell me, "Every time you touch something a kitten dies." - My mom told me that if I ate raw cookie dough I'd get worms. - "They don't sell replacement batteries for that toy." - Chuck E Cheese’s is only for birthday parties. You have to be invited to one in order to go there. - My parents got me to eat calamari by telling me they were "Italian  Onion Rings!"