NEWS FROM OUR BREWERY. Head brewer, MICHAEL GAETZ, reports the big malty Scottish Ale, MACGREGOR’S WEE HEAVY, is back on tap and in our offsale as is our seasonally available SASKADIAN BLACK IPA and BUSHVAR CZECH PILS. His newest fruit beer offering, BLACKBERRY PORTER, will be coming on tap soon. A batch of PICKARD’S OATMEAL CREAM STOUT and ARCTIC DARK LAGER are also currently working their way through the brewery. The final tank of our famous BLACKBERRY MEAD is almost gone! Our guest tap is now pouring a keg of New England IPA from Swift Current’s Black Bridge Brewery. Next up is the Malk Stout from Regina’s Malty National Brewery which will be followed by the Azacca SMASH from the Pile O’ Bones Brewery. Our premium romantic wines for the month of February are LA BELLE ANGELE wines from France. The red is a Cabernet Sauvignon and the white is a Sauvignon Blanc. Both are $7.50 for a glass and $18.95 for a half litre. New Bushwakker Menu is Out Now! Approximately every two years we give our full menu a little tweaking. New dishes have been added, some have been removed, some have been given a new twist and some old favourites have even returned! It’s always an exciting time for both customers and staff! Prairie Dog Magazine’s Best of Food and Drink 2018.  The nomination process has begun! Regina's dynamic local food & beverage scene is highlighted in this popular reader poll and contest. Last year Bushwakker took home quite a few awards and we look forward to more friendly food and drink fun with your continued enthusiastic support! Nominations begin February 1st at:  http://www.prairiedogmag.com/best-of-food-2018/#// The Bushwakker LOCAL ARTIST WALL for February features a special show of mother and son artists, Kathy and Lee Hancock of Regina. Kathy Hancock is a watercolour artist who likes to hug trees and big rocks.  She is grounded and energized by nature. She loves and is inspired by the painting styles and artworks of Emily Carr, Monet and Lisa Riehl, B.C.  She is a member of the Prairie Artists Guild, the Art Gallery of Regina, MacKenzie Art Gallery and the Regina Senior Centre Watercolor Group. kathy.hancock@myaccess.ca   Lee Hancock is a freelance photographer. He enjoys shooting many genres of photography that have stemmed from his specialty of automotive photography for various media groups throughout the years.  landscape, “cityscape”, portraiture, street photography and abstract concepts; some works praised in the photography community online and locally – considered a somewhat jack-of-all-trades photographer. A few assorted photographs can be seen at Bushwakker in metal print format. For more insight to Lee’s photo projects of past, present, and future he is active on many popular social media outlets and invites you to his pages to take a look!  https://www.facebook.com/nerdbotphotography/ 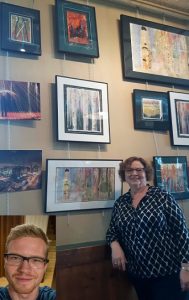 Feb. 12: Monday Night Jazz & Blues. TERRAPLANE. Shane Reoch leads this popular blues act featuring Bushwakker bartender and bassist, Troy Bleich. 8:00 PM. Feb. 14: Valentine Sweetheart Stout Cake Blackberry Battle. Join us as we celebrate the long-awaited return of our beloved Chocolate Stout Cake topped with rich chocolate porter rum sauce and vanilla ice cream. You and your sweetheart can each enjoy a slice of our signature dessert and pair it with either a goblet of our famous Blackberry Mead or a pint of our brand new Blackberry Porter. Hopefully no arguments will ensue over which beverage makes for the better pairing. Enjoy this doubly decadent dessert duo for only $25 per couple! 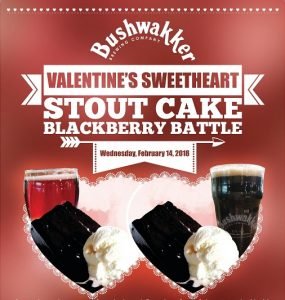 Feb. 14: Wednesday Night Folk. Kory Istace and Aryn Murray. A special Valentines rusty roots double bill! Former Regina resident, Kory Istace, delivers a powerful performance with Saskatoon artist, Aryn Murray. 8:00 PM. Feb. 15: HEALTH SCIENCE PUB - "Are you Happy with Your Current Cell Provider? Problems with private stem cell service." Our wildly popular Science Pub Series has returned for a sixth incredible season! Enjoy lectures on scientific topics of general interest in our Arizona Room (main floor banquet room) over beer and snacks. The room opens at 5:00 PM and quite often is full by 6:00 PM. Avoid disappointment and come down early for dinner and a pint before the presentation which begins at 7:00 PM. This month's lecture will be presented by Dr. Josef Buttigieg (UofR) who is one of two biomedical stem cell researchers in the province of Saskatchewan, and by Prof. Amy Zarzeczny (UofR) who is a health law and policy scholar whose research focuses on legal and policy issues associated with emerging biotechnologies including stem cell research. Stem cells have several unique characteristics. First they can self-replicate almost indefinitely. Secondly they can turn into various bodily organs, potentially able to reverse the severity of many diseases and injuries. The understandable excitement that has surrounded this promising field of research has likely helped fuel the development of a private market for stem cell based treatments that have not been proven to be safe or effective. One need only look to the internet to find a large number of private clinics operating in countries around the world and marketing stem cell based treatments for a sometimes dizzying array of ailments. During this event we will talk about the biology of stem cells in the context of disease and about some of the policy questions and challenges associated with the growing private market for unproven stem cell treatments. 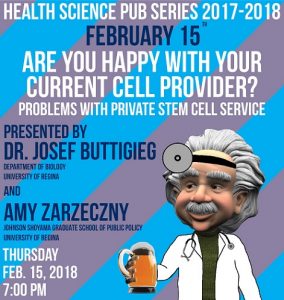 Why New England Style IPAs Will Continue to Dominate in 2018

TIME OUT  - Why Women Are So Cool

- We can scare male bosses with mysterious gynecological disorder  excuses. - Taxis stop for us. - We don't look like a frog in a blender when dancing. - No fashion faux pas we make could ever rival The Speedo. - We don't have to pass gas to amuse ourselves. - If we forget to shave, no one has to know. - We have the ability to dress ourselves. - We never have to reach down every so often to make sure our privates are still there.