NEWS FROM OUR BREWERY. Head brewer, MICHAEL GAETZ, reports the big malty Scottish Ale, MACGREGOR’S WEE HEAVY, is now back on tap and in our offsale as is our seasonally available SASKADIAN BLACK IPA and BUSHVAR CZECH PILS. His newest fruit beer offering, BLACKBERRY PORTER, was launched at the Beer Bacon Bands event and received rave reviews. It will be coming on tap soon. A batch of PICKARD’S OATMEAL CREAM STOUT and ARCTIC DARK LAGER are also currently working their way through the brewery. The final tank of our famous BLACKBERRY MEAD is almost gone! Our guest tap is now pouring a keg of Double IPA from Black Bridge Brewing in Swift Current. This will be followed by an Earl Grey Pale Ale called the Duke of Earl from Regina’s Malty National Brewing. Following that a Lemon Ginger Radler from District Brewing should help get you in a springtime mood! Our premium romantic wines for the month of February are LA BELLE ANGELE wines from France. The red is a Cabernet Sauvignon and the white is a Sauvignon Blanc. Both are $7.50 for a glass and $18.95 for a half litre. New Bushwakker Menu is Out Now! Approximately every two years we give our full menu a little tweaking. New dishes will be added, some will be removed, some will be given a new twist and some old favourites will even return! It’s always an exciting time for both customers and staff! Congratulations to our recent Bushwakker winners! Jenna Lipinski won a $100 Bushwakker gift card in our Bushwakker 27th Birthday Trivia Quiz draw and Breigh McDavid was the winner of our Blackberry Mead Prize Package contest draw we conducted at the Beer Bacon Bands festival last weekend. Prairie Dog Magazine’s Best of Food and Drink 2018.  Regina's dynamic local food & beverage scene is highlighted in this popular reader poll and contest. Last year Bushwakker took home quite a few awards and we look forward to more friendly food and drink fun with your continued enthusiastic support! Nominations begin February 1st at www.prairiedogmag.com.

Feb. 2: FIRST FIRKIN FRIDAY. Enjoy the pomp and circumstance of this long standing Bushwakker monthly tradition. A piper from the Regina Police Services Pipes and Drums leads a keg of special brew in a procession throughout the brewpub. A guest volunteer is selected to wield the handmade wooden maul affectionately referred to as The Mighty Firkin Wakker, and attempt to tap the firkin in one mighty blow. This month Bushwakker head brewer will present a CHAI SPICED PORTER. The delicious beer and suds-soaking experience takes place at 5:30 PM. Feb. 5: Monday Night Jazz & Blues. THE UNIVERSITY OF REGINA JAZZ BAND. Come hear this very large band comprised of Regina’s future jazz stars! 8:00 PM. Feb. 7: SASK ARCHIVES NIGHT - ‘The Regina That Never Was: Unbuilt Buildings and Plans from Archives in Regina.’ Presented by the Provincial Archives of Saskatchewan as part of Archives Week 2018. Join us for a "Spotlight on the Past" evening, featuring talks on the Mawson Plan, the Great War Museum and the College Avenue Campus. Master of Ceremonies for the event will be Frank Korvemaker. Guest speakers include Dr. Alex MacDonald, Prof. of English, Campion College, University of Regina; Dr. Bill Brennan, Prof. Emeritus, University of Regina and James Youck, P3Architecture Partnership. Archives Week showcases the role that archives and archivists play in preserving and making available Saskatchewan's documented heritage. Activities in communities across the province include celebrity reading events, film nights, open houses, exhibits and more. 7:00 PM. 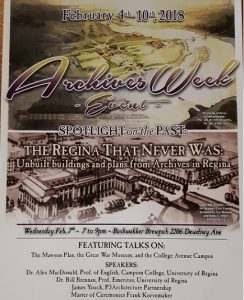 Feb. 7: Wednesday Night Folk. THE ACCOMPLICE. Innovative one-man band delivers Grammy recognizable rock songs. 9:00 PM. Note later show time due to Sask Archives event. Feb. 7: MONTHLY ALES MEETING. If you are looking to improve your skills as a homebrewer or just want to sit in a room filled with people who have a passion for creating great beer in the basement, then the ALES Club is for you! This month’s topics of discussion include: European Dark Lagers and Fermenting in Kegs. Meetings are held in the Bushwakker basement clubroom on the first Wednesday of each month at 8:00 PM. New members are always welcome. Feb. 12: Monday Night Jazz & Blues. TERRAPLANE. Shane Reoch leads this popular blues act featuring Bushwakker bartender and bassist, Troy Bleich. 8:00 PM. Feb. 14: Valentine Sweetheart Stout Cake Blackberry Battle. Join us as we celebrate the long-awaited return of our beloved Chocolate Stout Cake topped with rich chocolate porter rum sauce and vanilla ice cream. You and your sweetheart can each enjoy a slice of our signature dessert and pair it with either a goblet of our famous Blackberry Mead or a pint of our brand new Blackberry Porter. Hopefully no arguments will ensue over which beverage makes for the better pairing. Enjoy this doubly decadent dessert duo for only $25 per couple! Feb. 14: Wednesday Night Folk. Kory Istace and Aryn Murray. A special Valentines rusty roots double bill! Former Regina resident, Kory Istace, delivers a powerful performance with Saskatoon artist, Aryn Murray. 8:00 PM. Feb. 15: HEALTH SCIENCE PUB - "Are you Happy with Your Current Cell Provider? Problems with private stem cell service." Our wildly popular Science Pub Series has returned for a sixth incredible season! Enjoy lectures on scientific topics of general interest in our Arizona Room (main floor banquet room) over beer and snacks. The room opens at 5:00 PM and quite often is full by 6:00 PM. Avoid disappointment and come down early for dinner and a pint before the presentation which begins at 7:00 PM. This month's lecture will be presented by Dr. Josef Buttigieg (UofR) who is one of two biomedical stem cell researchers in the province of Saskatchewan, and by Prof. Amy Zarzeczny (UofR) who is a health law and policy scholar whose research focuses on legal and policy issues associated with emerging biotechnologies including stem cell research. Feb. 19: OPEN AT NOON. Monday Night Jazz & Blues. ‘ROUND MIDNIGHT. Come hear this popular act play popular jazz this holiday Monday. 8:00 PM. Feb. 21: Wednesday Night Folk. JAMES IRVING. Frontman of veteran local act, Nickletree, delivers roots rock. 8:00 PM. Feb. 26: Monday Night Jazz & Blues. MID-WINTER BLUES FESTIVAL EDITION presents JEFF MERTICK. This soulful veteran blues act kicks off the 2018 festival in fine form. 8:00 PM. Feb. 28: Wednesday Night Folk. MID-WINTER BLUES FESTIVAL EDITION presents RESONANCE. Powerful duo featuring vocalist, Christie-Anne Blondeau and bassist, Fred Foerster. 8:00 PM.

By Shay Castle Charlie Papazian has a resume a mile long: Founder of the Great American Beer Festival, the Brewers Association, the American Homebrewers Association and the World Beer Cup; best-selling author; publisher of two brewing magazines; contributor to the Smithsonian; and, perhaps less well known, the founder of National Pie Day. He stepped down as president of the Boulder-based Brewers Association in 2016. One year from now, he'll step away entirely from the organization he brought to life. The date — January 23, 2019 — will mark his 70th birthday. For this birthday, Papazian planned to celebrate with a fresh-baked pie at home and, it goes without saying, a glass or two of beer from his four home taps. And though he is retiring from the Brewers Association, he will be a continued presence in the homebrew and craft beer scenes. "My life has been an unending series of unanticipated opportunities," he said. "What I'll do next, I'll see." He will spend his final year of work compiling a massive archive of craft brewing history. Many of his own contributions deserve a place. "He's the godfather of American craft beer," said Marie Fox, co-owner of Gunbarrel Brewing Company. "We wouldn't have existed without Charlie. That would be the case for most craft brewers in America if not every one."Fox and her husband Jamie are longtime members of the homebrew club Papazian founded on March 30, 1989: Hop Barley and the Alers. The Foxes taste-tested creations there, and at the Homebrewers Association, which used to open up on Fridays to the brewing public. "Charlie would be there and taste our beer and give us encouragement," Fox said. "He always had something positive to say." Papazian turned his knowledge into tomes, including magazines Zymurgy (for home brewers) and The New Brewer (for independent craft brewers). He also wrote the seminal The Complete Joy of Home Brewing. Originally a self-published, 74-page book, it has gone through multiple editions and read the world over. It was the first book Bill Campbell put in his Longmont homebrew supply store, Brewmented, which opened (coincidentally) Tuesday, Papazian's 69th birthday. "Charlie helped to invent and legitimize the entire industry on the homebrewing front," Campbell said. "I wouldn't have opened up this store without what he did. The industry just wouldn't be where it is today. Everybody owes him a great deal of thanks. "We are all here today because of Charlie Papazian," said Bob Pease, president and CEO of the Brewers Association, in a statement. "His influence on the homebrewing and craft brewing community is immeasurable. Who could have predicted that a simple wooden spoon, ingenuity and passion would spawn a community of more than one million homebrewers and 6,000 small and independent U.S. craft breweries?" Said wooden spoon, at least, has earned its place in history. Papazian donated his personal instrument to the Smithsonian's National Museum of American History for an historically accurate display of homebrewing in the 1970s, part of the institution's American Brewing History Initiative. Papazian counts the book and the spoon among his proudest accomplishments in a long line of them. Another? The time Anheuser-Busch asked him to brew a commemorative beer to celebrate their brewmasters. He did it, happily delivering 30 gallons of his finest. Brewers big and small supported one another in those days, he said. Craft "wasn't going to take over the world then. We are now." 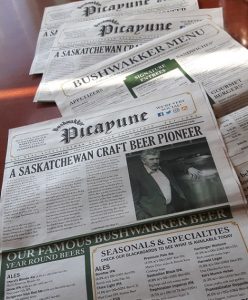 TIME OUT  - Music For Doctors’ Offices