NEWS FROM OUR BREWERY. Head brewer, MICHAEL GAETZ, reports the big malty Scottish Ale, MACGREGOR’S WEE HEAVY, is now back on tap and in our offsale as is our seasonally available SASKADIAN BLACK IPA and BUSHVAR CZECH PILS. His newest fruit beer offering, BLACKBERRY PORTER, will be coming soon. A batch of PICKARD’S OATMEAL CREAM STOUT and ARCTIC DARK LAGER are also currently working their way through the brewery. The final tank of our famous BLACKBERRY MEAD is almost gone! Our guest tap is now pouring the Peanut Butter Milk Stout from Regina’s Pile O’ Bones Brewery. Hopheads will be pleased to learn a keg of Double IPA from Black Bridge Brewing is next on our Guest Draught Beer roster! Our premium wines for January are the TWIST OF FATE wines from the Okanagan. The red is a Malbec/Merlot and the white is a Pinot Grigio/Chardonnay. Both are $6.95 for a glass and $16.95 for a half litre. Our DUNGARVON IRISH RED ALE is now available for growler fills at the Quance Street SLGA store in Regina. Three other fine Saskatchewan craft beers are also available. Enjoy them for a limited time! Bushwakker Prime Rib Weekends – FINAL WEEKEND! Enjoy our melt-in-your-mouth, low-and-slow roasted prime rib dinners with jumbo Yorkshire pudding. And Sunday suppers just got a whole lot better at the Bushwakker! Choose from either an 8 oz. or a 10 oz. cut. Prime rib is definitely one of Bushwakker executive chef Mike’s specialties. New Bushwakker Menu Coming this February! Approximately every two years we give our full menu a little tweaking. New dishes will be added, some will be removed, some will be given a new twist and some old favourites will even return! It’s always an exciting time for both customers and staff! Prairie Dog Magazine’s Best of Food and Drink 2018.  Regina's dynamic local food & beverage scene is highlighted in this popular reader poll and contest. Last year Bushwakker took home quite a few awards and we look forward to more friendly food and drink fun with your continued enthusiastic support! Nominations begin February 1st at www.prairiedogmag.com.

Jan 26 & 27: BEER BACON BANDS. If you enjoy beer and great live music then don't miss out on one of the biggest parties of the winter! Three of the greatest things in life rolled up into one sudsy, salty night - a beer fest, a bacon fest and a music festival all in one! Be sure to stop by the Bushwakker booth and try this year’s festival offerings! 7:00 – 11:00 PM. 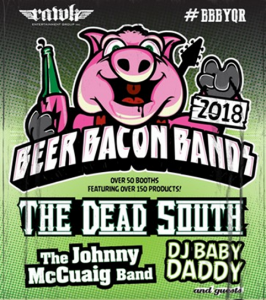 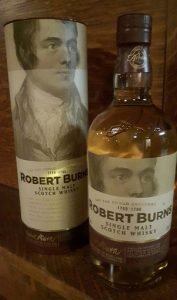 Drams of the Robert Burns single malt as well as a firkin of our MacGregor’s Wee Heavy Strong Scottish ale infused with this Isle of Arran distillery product will be available at our Bushwakker /Burns Birthday Bash on January 27th. Jan. 29: Monday Night Jazz & Blues. JEFF MERTICK. Veteran blues act returns with his richly inspired New Orleans style of soul and blues. 8:00 PM. Jan. 31: Wednesday Night Folk. LEXY DESJARLAIS. Bushwakker’s own bartender, server and talented guitar diva returns for an encore performance. 8:00 PM Feb. 2: FIRST FIRKIN FRIDAY. Enjoy the pomp and circumstance of this long standing Bushwakker monthly tradition. A piper from the Regina Police Services Pipes and Drums leads a keg of special brew in a procession throughout the brewpub. A guest volunteer is selected to wield the handmade wooden maul affectionately referred to as The Mighty Firkin Wakker, and attempt to tap the firkin in one mighty blow. This month Bushwakker head brewer will present a CHAI SPICED PORTER. The delicious beer and suds-soaking experience takes place at 5:30 PM. Feb. 5: Monday Night Jazz & Blues. THE UNIVERSITY OF REGINA JAZZ BAND. Come hear this very large band comprised of Regina’s future jazz stars! 8:00 PM. Feb. 7: SASK ARCHIVES NIGHT - ‘The Regina That Never Was: Unbuilt Buildings and Plans from Archives in Regina.’ Presented by the Provincial Archives of Saskatchewan as part of Archives Week 2018. Join us for a "Spotlight on the Past" evening, featuring talks on the Mawson Plan, the Great War Museum and the College Avenue Campus. Master of Ceremonies for the event will be Frank Korvemaker. Guest speakers include Dr. Alex MacDonald, Prof. of English, Campion College, University of Regina; Dr. Bill Brennan, Prof. Emeritus, University of Regina and James Youck, P3Architecture Partnership. Archives Week showcases the role that archives and archivists play in preserving and making available Saskatchewan's documented heritage. Activities in communities across the province include celebrity reading events, film nights, open houses, exhibits and more. 7:00 PM. Feb. 7: Wednesday Night Folk. THE ACCOMPLICE. Innovative one-man band delivers Grammy recognizable rock songs. 9:00 PM. Note later show time due to Sask Archives event. Feb. 7: MONTHLY ALES MEETING. If you are looking to improve your skills as a homebrewer or just want to sit in a room filled with people who have a passion for creating great beer in the basement, then the ALES Club is for you! This month’s topics of discussion include: European Dark Lagers and Fermenting in Kegs. Meetings are held in the Bushwakker basement clubroom on the first Wednesday of each month at 8:00 PM. New members are always welcome. Feb. 12: Monday Night Jazz & Blues. TERRAPLANE. Shane Reoch leads this popular blues act featuring Bushwakker bartender and bassist, Troy Bleich. 8:00 PM. Feb. 14: Valentine Sweetheart Stout Cake Blackberry Battle. Join us as we celebrate the long-awaited return of our beloved Chocolate Stout Cake topped with rich chocolate porter rum sauce and vanilla ice cream. You and your sweetheart can each enjoy a slice of our signature dessert and pair it with either a goblet of our famous Blackberry Mead or a pint of our brand new Blackberry Porter. Hopefully no arguments will ensue over which beverage makes for the better pairing. Enjoy this doubly decadent dessert duo for only $25 per couple! Feb. 14: Wednesday Night Folk. Kory Istace and Aryn Murray. A special Valentines rusty roots double bill! Former Regina resident, Kory Istace, delivers a powerful performance with Saskatoon artist, Aryn Murray. 8:00 PM. The big Bushwakker 27th and Robbie Burns 259th combined birthday event takes place on Saturday, January 27th. It is indeed a coincidence that The Bushwakker Brewpub opened the same day that the world celebrates the birth of Scotland’s favourite son. Those who are unfamiliar with Mr. Burns’ cultural contributions will find the following article useful.

By Jay Brooks  January 25th, of course, in Burns Night, with Burns Suppers and other celebrations going on in Scottish, and other, communities worldwide. The reason it’s today is because it’s the day that Scottish poet and lyricist Robert Burns was born (January 25, 1759–July 21, 1796). He was “also known as Rabbie Burns, the Bard of Ayrshire, Ploughman Poet and various other names and epithets. He is widely regarded as the national poet of Scotland and is celebrated worldwide. He is the best known of the poets who have written in the Scots language, although much of his writing is also in English and a light Scots dialect, accessible to an audience beyond Scotland. He also wrote in standard English, and in these writings his political or civil commentary is often at its bluntest.” He is regarded as a pioneer of the Romantic movement, and after his death he became a great source of inspiration to the founders of both liberalism and socialism, and a cultural icon in Scotland and among the Scottish diaspora around the world. Celebration of his life and work became almost a national charismatic cult during the 19th and 20th centuries, and his influence has long been strong on Scottish literature. In 2009 he was chosen as the greatest Scot by the Scottish public in a vote run by Scottish television channel STV. As well as making original compositions, Burns also collected folk songs from across Scotland, often revising or adapting them. His poem (and song) “Auld Lang Syne” is often sung at Hogmanay (the last day of the year), and “Scots Wha Hae” served for a long time as an unofficial national anthem of the country. Other poems and songs of Burns that remain well known across the world today include “A Red, Red Rose”, “A Man’s a Man for A’ That”, “To a Louse”, “To a Mouse”, “The Battle of Sherramuir”, “Tam o’ Shanter” and “Ae Fond Kiss”. Never been to a Burns Night? The Telegraph has an answer to “What is Burns night and Who was Robert Burns? “It’s a night that features whisky, haggis and poetry in honour of ‘Rabbie’ Burns.” Notice that it’s primarily whisky that is the featured drinks at these events. In a nutshell, “Burns suppers may be formal or informal. Both typically include haggis (a traditional Scottish dish celebrated by Burns in Address to a Haggis), Scotch whisky and the recitation of Burns’s poetry. Formal dinners are hosted by organisations such as Burns clubs, the Freemasons or St Andrews Societies; they occasionally end with dancing when ladies are present.” Burns’ favorite drink was most likely whisky, but that doesn’t mean he wouldn’t drink wine or beer, and that fact was reflected in his poetry and song lyrics. He even did his own well-known version of the folksong John Barleycorn. So after you’ve enjoyed your haggis, and drank your whisky, here are a selection of Burns’ work where he mentions beer or ale. Some are the full poem, though most are simply an excerpt from longer poems or lyrics. Robert Burns, from “Tam o’ Shanter,” 1791 “Inspiring bold John Barleycorn, What dangers thou canst make us scorn! Wi’ tippenny, we fear nae evil; Wi’ usquebae, we’ll face the devil!” Robert Burns, from “Gude Ale Keeps The Heart Aboon,” 1795 “O gude ale comes and gude ale goes, Gude ale gars me sell my hose, Sell my hose, and pawn my shoon, Gude ale keeps my heart aboon. I had sax owsen in a pleugh, They drew a’ weel eneugh, I sald them a’, ane by ane, Gude ale keeps my heart aboon. Gude ale hauds me bare and busy, Gars me moop wi’ the servant hizzie, Stand i’ the stool when I hae done, Gude ale keeps my heart aboon. Robert Burns, from “Scroggam, My Dearie,” 1803 “There was a wife wonn’d in Cockpen, Scroggam; She brew’d gude ale for gentlemen; Sing auld Cowl lay ye down by me, Scroggam, my dearie, ruffum.”

TIME OUT  - Music For Doctors’ Offices