NEWS FROM THE BUSHWAKKER BREWERY. Bushwakker head brewer, MICHAEL GAETZ, reports the big malty Scottish Ale, MACGREGOR’S WEE HEAVY, is now back on tap and in our offsale as is our seasonally available SASKADIAN BLACK IPA and BUSHVAR CZECH PILS. Our newest fruit beer offering, BLACKBERRY STOUT, will be coming soon and a batch of PICKARD’S OATMEAL CREAM STOUT is also working its way through the brewery. The final tank of our famous BLACKBERRY MEAD is on tap! Enjoy while quantities last. Our guest tap is currently pouring the Uno IPA from Black Bridge Brewing in Swift Current followed by a Tropical Strawberry Milkshake IPA of Doom from Regina’s Malty National Brewing and then a Peanut Butter Stout from Regina’s Pile O’ Bones Brewery. Our premium wines for January are the TWIST OF FATE wines from Niagara Falls. The red is a Malbec/Merlot and the white is a Pinot Grigio/Chardonnay. Both are $6.95 for a glass and $16.95 for a half litre. Our DUNGARVON IRISH RED ALE is now available for growler fills at the Quance Street SLGA store in Regina. Three other fine Saskatchewan craft beers are also available. Enjoy them for a limited time! Bushwakker Prime Rib Weekends are here until the end of January! Enjoy our melt-in-your-mouth, low-and-slow roasted prime rib dinners with jumbo Yorkshire pudding. And Sunday suppers just got a whole lot better at the Bushwakker! Choose from either an 8 oz. or a 10 oz. cut. Prime rib is definitely one of Bushwakker executive chef Mike’s specialties. 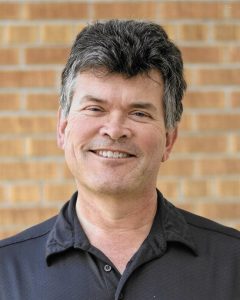 Our new featured BUSHWAKKER WRITERS CORNER local author is Edward Willett. Ed is the author of more than 60 books of fiction and nonfiction for adults, young adults, and children, including eight novels published by DAW Books in New York, one of the premiere publishers in the science fiction and fantasy genre. His most recent book for DAW is a stand-alone science fiction novel, The Cityborn; his ninth novel for DAW, Worldshaper, will come out in September 2018 to launch a new series. Other novels include the recently-completed Shards of Excalibur YA fantasy series published by Regina’s Coteau Books, and the Masks of Aygrima fantasy trilogy, written as E.C. Blake and published by DAW. His non-fiction runs the gamut from computer books to local history to children’s science books and biographies. Born in New Mexico, Ed grew up in Weyburn, and came to Regina in 1988 as communications officer for the Saskatchewan Science Centre. He’s been a fulltime writer since 1993. Ed won a 2002 Saskatchewan Book Award for YA fantasy Spirit Singer (Tyche), and in 2009 won the Aurora Award for best Canadian science fiction novel for Marseguro (DAW). He’s married to Margaret Anne Hodges, P.Eng., a past president of the Association of Professional Engineers and Geoscientists of Saskatchewan, and has a teenage daughter, Alice.

Jan. 22: Monday Night Jazz & Blues. THE MINISTRY OF GROOVE.  1970’S jazz funk and beyond. Love those horns! 8:00 PM. Jan. 24: Wednesday Night Folk. WINTER SINGER/SONGWRITER SHOWCASE. Hear over a half dozen veteran and up-and-coming local artists including: Ben Sefton, Devon Floyd, Jay Greenman, Regan Hinchcliffe, Tom Douglas, Trent Leggott & Neil Child. 8:00 PM. Jan 26 & 27: BEER BACON BANDS. If you enjoy beer and great live music then don't miss out on one of the biggest parties of the winter! Three of the greatest things in life rolled up into one sudsy, salty night - a beer fest, a bacon fest and a music festival all in one! Be sure to stop by the Bushwakker booth and try this year’s festival offerings! 7:00 – 11:00 PM. Jan 27: BUSHWAKKER 27th/ROBERT BURNS 259th BIRTHDAY BASH. Join us as we celebrate over a quarter century of award-winning beer and pub cuisine and Scotland’s favourite son, Robbie Burns. Live rollicking reels with The Tilted Kilts and The Regina Police Services Pipes & Drums, highland dancing, FREE HAGGIS, neeps and birthday cake, the tapping of the Scottish birthday firkin containing our MacGregor’s Wee Heavy infused with Robert Burns Single Malt whisky from the Isle of Arran Scottish distillery, plus Burns poetry and historical overview from Saskatchewan author and playwright, Ken Mitchell. A great way to shake those January blahs. The dance floor will be open! $5 cover charge in effect. 6:00 PM. 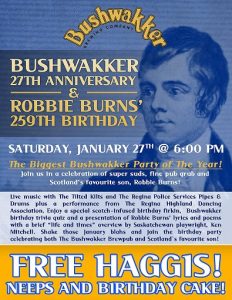 The year is 2222 and Mike and Maureen land on Mars after accumulating enough frequent flier miles. They meet a Martian couple and are talking about all sorts of things. Mike asks if Mars has a stock market, if they have laptop computers, how they make money, etc. Finally, Maureen brings up the subject of sex. "Just how do you guys do it?" asks Maureen. "Pretty much the way you do," responds the Martian. Discussion ensues and finally the couples decide to swap partners for the night and experience one another. Maureen and the male Martian go off to a bedroom where the Martian strips. He's got only a teeny, weeny member about half an inch long and just a quarter inch thick. I don't think this is going to work," says Maureen. "Why?" he asks, "What's the matter?" Maureen replies, "Well, it's just not long enough to reach me!" The male Martian confidently says, "No problem," and proceeds to slap his forehead with his palm. With each slap of his forehead, his member grows until it's quite impressively long. "Well," she says, "That's quite impressive, but it's still pretty narrow." Without breaking a sweat he says, "Not a problem," and starts pulling his ears. With each pull, his member grows wider and wider until the entire measurement is extremely exciting to the woman. "Wow!" she exclaims, as they fell into bed and made mad, passionate love. The next day the couples rejoin their normal partners and go their separate ways. As they walk along, Mike asks "Well, was it any good?"  Maureen blushes, "I hate to say it, but it was pretty wonderful. How about you? "It was horrible," he replies, “All I got was a terrible headache. All she kept doing the whole time was slapping my forehead and pulling my ears!"