NEWS FROM THE BUSHWAKKER BREWERY. Bushwakker head brewer, MICHAEL GAETZ, reports the big malty Scottish Ale, MACGREGOR’S WEE HEAVY, is now back on tap and in our offsale! We only see this Bushwakker anniversary brew once every two years! Hopheads will be happy to learn that another batch of SASKADIAN BLACK IPA has been brewed. The BUSHVAR CZECH PILS has seen favourable extensive aging in our beer cellar and is now on tap. Our newest fruit beer offering, BLACKBERRY STOUT, will be coming soon! The final tank of our famous BLACKBERRY MEAD is on tap! Enjoy while quantities last. We are receiving very positive feedback indicating this is one of our best mead batches in years! Our guest tap is currently pouring the Mosaic Smash IPA from Regina’s Pile O’ Bones Brewing. Next up is the Toffee Five chocolate toffee porter from Prairie Sun Brewing in Saskatoon followed by the Uno IPA from Black Bridge Brewing in Swift Current. Our premium wines for January are the TWIST OF FATE wines from the Okanagan. The red is a Malbec/Merlot and the white is a Pinot Grigio/Chardonnay. Both are $6.95 for a glass and $16.95 for a half litre. Our DUNGARVON IRISH RED ALE is now available for growler fills at the Quance Street SLGA store in Regina. Three other fine Saskatchewan craft beers are also available. Enjoy them for a limited time! Bushwakker Prime Rib Weekends Return! Back by popular demand! Our melt-in-your-mouth, low-and-slow roasted prime rib dinners with jumbo Yorkshire pudding have returned. And Sunday suppers just got a whole lot better at the Bushwakker! Choose from either an 8 oz. or a 10 oz. cut. Prime rib is definitely one of Bushwakker executive chef Mike’s specialties. The Bushwakker LOCAL ARTIST WALL for the month of January features a special collection from Regina’s Birthing Artists Academy. The academy is owned and operated by Amy Dawn S. Amy’s vision is to create a world where human beings can realize their greatness through their creative potential. Birthing Artists is about inspiring potential mastery while focusing on collaboration.  She works with other artists and entrepreneurs and anyone looking for a deeper connection with their life.  As an artist she is gifted at teaching other artists and entrepreneurs how to let go and create from an innate intelligence and energy that she believes is the source of who we all are. Amy’s medium for working with others is painting although she integrates her 10 years of knowledge and wisdom in personal growth and self-development. You can apply to work with Amy through Birthing Artists Academy. The featured artists and entrepreneurs are: Cristian Barreno - http://www.cristianbarreno.com, Charlotte Hauk - http://www.charlottehaukart.com, Laura Stark & Christine Mazenc. A final piece will be added to the wall very shortly. On Wednesday, January 10th a large canvas was set up by the stage for the evening’s Wednesday Night Folk night performance. A painting was created by a small group of students and artists from the Birthing Artists Academy who were collaborating a live painting while being inspired by local folk duo, The Empire Associates, and the life of Bev Robertson. The finished piece was made available for silent auction that night and 100% of the proceeds were generously given to the Allan Blair Cancer Center in Regina. 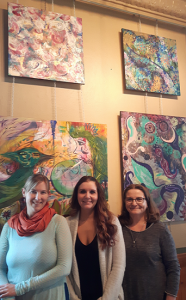 This month’s Local Artist Wall features the Birthing Artists Academy. The wall will see the addition of a new collaborative painting which was created during the January 10th Wednesday Night Folk performance.

Jan. 15: Monday Night Jazz & Blues. A STORRY WITH HUGHES. Talented rockin’ acoustic blues duo featuring Jeff Storry and Billy Hughes. 8:00 PM. Jan. 17: Wednesday Night Folk. THE RED WAGON GYPSIES. An unplugged a cappella/acoustic blend of sister-like harmonies. 8:00 PM. Jan. 18: SCIENCE PUB. The Mysteries of Proxima Centauri. Our wildly popular Science Pub Series has returned for a sixth incredible season! Enjoy lectures on scientific topics of general interest in our Arizona Room (main floor banquet room) over beer and snacks. The room opens at 5:00 PM and quite often is full by 6:00 PM. Avoid disappointment and come down early for dinner and a pint before the presentation which begins at 7:00 PM. This month's lecture will be presented by Dr. Martin Beech, Adjunct Professor, Campion College, University of Regina. Proxima Centauri is the next nearest star after the Sun, and yet it is invisible to the unaided eye. A low mass, low luminosity red dwarf star Proxima is known to be orbited by at least one Earth-mass planet and it is to be the target-star for the first interstellar space mission sponsored by the Breakthrough Starshot initiative. Proxima may be astronomically close, but it continues to deify both astronomical theory and expectation, showing many odd behaviours that astronomers are still trying to understand  - there is, indeed, more going on with Proxima Centauri than meets the human eye. Jan. 22: Monday Night Jazz & Blues. THE MINISTRY OF GROOVE.  1970’S jazz funk and beyond. Love those horns! 8:00 PM. Jan. 24: Wednesday Night Folk. WINTER SINGER/SONGWRITER SHOWCASE. Hear over a half dozen veteran and up-and-coming local artists including: Ben Sefton, Devon Floyd, Jay Greenman, Regan Hinchcliffe, Tom Douglas, Trent Leggott & Neil Child. 8:00 PM. Jan 26 & 27: BEER BACON BANDS. If you enjoy beer and great live music then don't miss out on one of the biggest parties of the winter! Three of the greatest things in life rolled up into one sudsy, salty night - a beer fest, a bacon fest and a music festival all in one! Be sure to stop by the Bushwakker booth and try this year’s festival offerings! 7:00 – 11:00 PM. Jan 27: BUSHWAKKER 27th/ROBERT BURNS 259th BIRTHDAY BASH. Join us as we celebrate over a quarter century of award-winning beer and pub cuisine and Scotland’s favourite son, Robbie Burns. Live rollicking reels with The Tilted Kilts and The Regina Police Services Pipes & Drums, highland dancing, FREE HAGGIS, neeps and birthday cake, the tapping of the Scottish birthday firkin containing our MacGregor’s Wee Heavy infused with Robert Burns Single Malt whisky from the Isle of Arran Scottish distillery, plus Burns poetry and historical overview from Saskatchewan author and playwright, Ken Mitchell. A great way to shake those January blahs. The dance floor will be open! $5 cover charge in effect. 6:00 PM. Jan. 29: Monday Night Jazz & Blues. JEFF MERTICK. Veteran blues act returns with his richly inspired New Orleans style of soul and blues. 8:00 PM. Jan. 31: Wednesday Night Folk. LEXY DESJARLAIS. Bushwakker’s own bartender, server and talented guitar diva returns for an encore performance. 8:00 PM The North American Guild of Beer Writers honoured beer journalists at a ceremony during Great American Beer Festival week. The guild recognized three CraftBeer.com articles. The Brew Brothers journalism team took 2nd place in Beer Criticism and Commentary for their article below:

The Evolving Role of Women’s Contributions to Brewing Beer 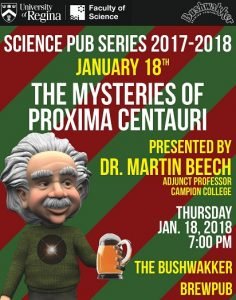 The second half of our sixth season of Science Pub kicks off January 18th.

A young lady stops by her grandmother's house on the way to a dance. She wants to introduce her boyfriend to her grandmother. As they are chatting, her boyfriend spies some peanuts on the coffee table. He begins munching on them as they converse. After about an hour, they are getting ready to leave and he thanks the grandmother for her hospitality and especially for the peanuts. "Oh, you’re welcome young man," she says. "I appreciate you finishing them up. Ever since I lost my dentures I can only suck the chocolate off of them."