Bushwakker Gift Ideas for the Craft Beer Enthusiast on Your List. We still have a few “Come Together, Right Now, Over MEAD” 2017 Bushwakker Blackberry Mead commemorative t-shirts left. Our Bushwakker Growler Gift Boxes include your choice of a glass or stainless steel Bushwakker Joe Fafard growler, two pint glasses and a gift certificate redeemable for a growler fill. Our very popular Christmas Variety Six-Packs include some of our seasonal and specialty offerings including bottles of Blackberry Mead and Missiletow Christmas Ale, our Festive Fancy Hop Handle Growler, 2 Glasses and a Growler Fill Christmas Pack is also back by popular demand…and you can’t go wrong with a Bushwakker gift card! 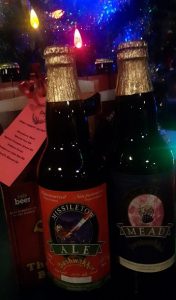 NEWS FROM THE BUSHWAKKER BREWERY. Bushwakker head brewer, MICHAEL GAETZ, reports the big malty Scottish Ale, MACGREGOR’S WEE HEAVY, will be back soon. We only see this Bushwakker anniversary brew once every two years! His very popular TWO SONS MILK STOUT is receiving rave reviews and is moving quickly. The BUSHVAR CZECH PILS has been aging nicely in our beer cellar and will come on tap following the NORTHERN STRONG LAGER. Our brand new Bushwakker fruit beer, PEACH PASSION FRUIT ALE is almost gone! Our MISSILE "TOW” CHRISTMAS ALE bottles sold out in only 30 minutes. It is now on tap and available for growler fills. Our famous BLACKBERRY MEAD is also now on tap! We are receiving very positive feedback indicating this is one of our best mead batches in years! Both our Mead and Missiletow are available in our CHRISTMAS VARIETY SIX - PACKS. Our Sodbuster Brown Ale is now available for growler fills at the Quance Street SLGA store in Regina. Three other fine Saskatchewan craft beers are also available. Enjoy them for a limited time! Bushwakker Prime Rib Weekends Return! Back by popular demand! Our melt-in-your-mouth, low-and-slow roasted prime rib dinners with jumbo Yorkshire pudding have returned. And Sunday suppers just got a whole lot better at the Bushwakker! Choose from either an 8 oz. or a 10 oz. cut. Prime rib is definitely one of Bushwakker executive chef Mike’s specialties. Bushwakker-CJTR Nothing For New Year’s Dead South Contest. Our annual New Year’s Eve non-event just got even better! Reservations are now being accepted. Anyone who makes a reservation will be entered in our draw to win two tickets to see the Dead South at Casino Regina on New Year’s Eve. Draw date is December 30th. Hurry and make your dinner reservation today! Our premium wines for December are the MENAGE A TROIS wines from California. The red is called Midnight and is a Merlot/Cabernet/Petit Sirah/Petit Verdot and the white is a Pinot Grigio. Both are $8.50 for a glass and $23.95 for a half litre. Our guest tap is currently pouring a Robust Porter from Black Bridge Brewery and then the Moose Tracks Hazelnut Espresso Stout from Saskatoon’s Prairie Sun Brewery. 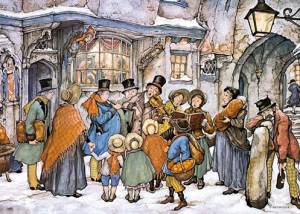 Dec. 24: CHRISTMAS EVE. Open from noon until 5:00 PM. Stop by for a growler fill, a snack or some offsale bottles. Dec. 25: CLOSED. Merry Christmas! Thank you for your continued enthusiastic support and all the best to you and yours this holiday season! Dec. 27: Wednesday Night Folk. BILLARNEY. Huge acoustic Celtic band returns for a mid-holiday week ceilidh! 8:00 PM. Dec. 31: Nothing For New Year's 12. Over a decade ago we offered you a simple formulated event and you loved it. No noise makers, no escalated drink prices, no cover charge, no midnight champagne, no dancing, no line-ups, no hassle, no problem! Come spend a relaxing evening at the good 'ol Bushwakker as we welcome 2018. Perhaps try Chef Mike's special prime rib and jumbo Yorkshire pudding New Year's Eve dinner. What a meal to finish off the year! Anyone who makes a reservation will be entered in our draw to win two tickets to see the Dead South at Casino Regina on New Year’s Eve. Draw date is December 30th. Hurry and make your dinner reservation today!

By Jason Foster - onbeer.org It is well-known that the Alberta beer industry is in the midst of a huge explosion. The province now has over 60 breweries (almost 70 licenses, but I count independent operations, not AGLC licenses). Of which 46 have opened their doors in the last 2-and-a-bit years. Eighteen have opened so far in 2017 alone (as of early November). Something is up. And that something is beer policy. Quite frankly beer policy makes a difference. The last six years have seen a sea-change in Alberta’s approach to beer. The effects are being felt. In my most recent Vue Weekly column I offer a quick overview of the changes at the provincial and municipal level and what their impact has been. To regular onbeer.org readers, little of that column will be new, but I wanted to use this post to expand a bit on the notion that beer policy matters. To briefly summarize, there have been what I say are three waves of policy changes. The first, and unquestioningly important, was in 2011 when the Redford Tory government eliminated minimum production capacities. Suddenly opening a brewery could happen with smaller amounts of money. The second wave has been under the Notley NDP government. Its highest profile move was to change the mark-up and create a grant for Alberta breweries. But we shouldn’t forget a series of other reforms, including easing rules around tasting rooms, allowing breweries into farmers’ markets and being more active in publicly promoting Alberta beer. The third wave has been municipally in Edmonton and Calgary who have both eased zoning restrictions on where a brewery can open. These changes have opened up popular areas, such as Whyte or 17 Avenue S, which were previously off-limits for a brewery. The rapid growth in Alberta breweries is due to a complex combination of factors. I am not here to over-simplify the situation. I am well aware many things non-policy-related matter a great deal. Neither will I dismiss the concerns of importers who argue the mark-up policy in particular is unfair to non-Alberta breweries and may be unconstitutional, as a lawsuit and a trade challenge argue (I am pretty sure no one objects to the other changes that have occurred). But I will say this. The policy changes of the past few years have made a measurable, tangible difference for Alberta’s beer industry. The sum result of the policies are threefold. First, they lower the bar for entry. It no longer requires almost a million bucks to open a brewery (heck, Beer Factory in St. Albert has a brewhouse no larger than my homebrew system). If you have the money, great, but you can open a small brewery on a shoestring if you want to. The bylaw changes are also a part of lower the threshold for entry. If you know you can open in a high traffic area, it reduces the risk in opening a new brewery. Second, they have created more space for Alberta beer. For the most part the consumer has been minimally affected by the mark-up changes, I argue. But for the gatekeepers – the bar and liquor store owners – the price differential has made a big difference. Suddenly Alberta beer, kegs in particular, are just that much more price competitive, which makes them more attractive compared to import craft beer and lowers the resistance to trying something new. I realize some will argue consumers are being harmed by both higher prices for imports and lesser selection. The former is somewhat valid, but I challenge any committed craft drinker to tell me that an extra 50 cents for a pint or a buck or two for a six-pack is really a hardship (it is a disposable income purchase, after all). The latter simply doesn’t hold out. Only a handful of breweries have pulled out of the market, most of whom were marginal in the first place, meaning despite press releases the reasons have to do with other factors than the mark-up. Recent exits of Stone and Firestone Walker have more to do, in my opinion, with their market position than price, which would have been high regardless. They are coveted “trophy” beer, but once a consumer has tried them once, what is the motivation to keep buying it over other new options and old stand-bys? I believe they were caught in the logic of their own positioning as the new and hip entrant. As for Steam Whistle and Great Western (the parties in the lawsuit against the mark-up), their core problem is that they have built a business model where a majority of their sales are dependent on Alberta. Plus the ongoing entry of other breweries into Alberta puts the boots to any argument that the market has become hostile to import beer. Many breweries still think there is money to be made here. In fact, most import breweries have shifted their approach to adapt, for example moving away from kegs and to smaller packaging such as bombers and four-packs. Frankly, this is what successful companies do – adapt to circumstances. The third effect of the policy changes has been to increase the credibility of Alberta beer.  It  has become a legitimate option in the beer world.  This shift is due in part to overall trends of consumers embracing local, but it also is about the public storyline of Alberta beer. For years the narrative was a handful of hardy, determined pioneers struggling against an unfair system. Today the story is one of success – of new start-ups taking their town by storm or creative new releases. This narrative is helped along by news stories and social media posts of prominent politicians posing with Alberta breweries, talking up their value to the province. All this stuff matters. Some of it in small ways, others in more substantial ways. I am well aware policy isn’t the only factor – it may not even be the most significant factor. But it matters. And that warms my policy wonk heart.

TIME OUT  - Sexy Quotes from Star Wars - A New Hope

'She may not look like much, but she's got it where it counts, kid.' 'Curse my metal body, I wasn't fast enough!' 'Look at the size of that thing!' 'Sorry about the mess...' 'You came in that thing? You're braver than I thought.' 'Aren't you a little short for a stormtrooper?' 'You've got something jammed in here real good.' "That's okay, I'd like to keep it on manual control for a while." "Hurry up, golden-rod..." "I must've hit it pretty close to the mark to get her all riled up like that, huh kid?" "Possible he came in through the south entrance." "And I thought they smelled bad on the outside!" "Control, control! You must learn control!" 'Put that thing away before you get us all killed!' 'Luke, at that speed do you think you'll be able to pull out in time?' 'Get in there you big furry oaf, I don't care what you smell!'