Bushwakker Prime Rib Weekends Return! Back by popular demand! Our melt-in-your-mouth, low-and-slow roasted prime rib dinners with jumbo Yorkshire pudding have returned. And Sunday suppers just got a whole lot better at the Bushwakker! Choose from either an 8 oz. or a 10 oz. cut. Prime rib is definitely one of Bushwakker executive chef Mike’s specialties. NEWS FROM THE BUSHWAKKER BREWERY. Bushwakker head brewer, MICHAEL GAETZ, reports the very popular TWO SONS MILK STOUT is receiving rave reviews and is moving quickly. Good thing he made a double batch!  The BUSHVAR CZECH PILS is working its way through the brewery and will come on tap following the NORTHERN STRONG LAGER. Our brand new Bushwakker fruit beer, the BERRY CHERRY BLEND is almost gone. Our MISSILE "TOW” CHRISTMAS ALE is now aging in our beer cellar and will be released on December 9th. Our BLACKBERRY MEAD is also almost ready for our big December 2nd MEAD DAY! Our first ever Blackberry Mead Day T-shirt Slogan Contest was a huge success! Thank you for the many, many clever and witty submissions we received. Although there were many contenders, the slogan that resonated with us the best was submitted by Jennifer Cheney. Her slogan was “Come together, right now…over MEAD!”. Congratulations Jennifer, you are the winner of the Bushwakker Blackberry Mead Package valued at over $100! Be sure to look for our new 2017 limited edition “Bee-tles” Bushwakker Blackberry Mead t-shirts on Saturday, December 2nd! Tickets to our November 25th SINGLE MALT SCOTCH TASTING are now on sale! This year’s featured single malts include: Ardbeg Dark Cove, Edradour Ballechin, Lagavulin 8 Year, Clynelish Distiller’s Edition, Glen Scotia 15 Year and Gordon & McPhail Private Collection Tormore 2002. Our premium wines for November are the CASILLERO DEL DIABLO DEVIL’S COLLECTION wines from Chile. The red is a Syrah/Cabernet Sauvignon and the white is a Chardonnay/Sauvignon Blanc. Both are $7.95 for a glass and $22.95 for a half litre. Our guest tap is currently pouring a Sour IPA from Nokomis Craft Ales; $5.95 for a half pint and $7.95 for a pint. Next up we will offer an Autumn Saison from Black Bridge Brewery in Swift Current.

Nov. 20: Monday Night Jazz & Blues. JEFF MERTICK. Veteran singer/songwriter returns with his richly inspired New Orleans style of soul and blues. 8:00 PM. Nov. 22: Wednesday Night Folk. BRADFORD. Talented folk duo featuring Brad Papp and Mark Radford. 8:00 PM. Nov. 23: SCIENCE PUB. Not Just Flat! Top Geological Sites of Saskatchewan. Our wildly popular Science Pub Series has returned for interest in our Arizona Room (main floor banquet room) over beer and snacks. The room opens at 5:00 PM and quite often is full by 6:00 PM. Avoid disappointment and come down early for dinner and a pint before the presentation which begins at 7:00 PM. This month's lecture will be presented by Dr. Janis Dale, Department of Geology, University of Regina. Did you know there were volcanoes in Saskatchewan?  Did you know that our province was once the bottom of a sea when giant reptiles patrolled its waters?  Did you know that there was as much as 2 km thick ice that covered most of Saskatchewan not once, not twice but at least five times and left behind many of the landscape features seen today?  Did you know that Saskatchewan is not all flat and has spectacular geological features?  You are invited to hear Dr. Dale’s top picks for the most amazing geological sites in Saskatchewan.  We will discuss what these features are, some of the theories on how they formed and where you can see them today! 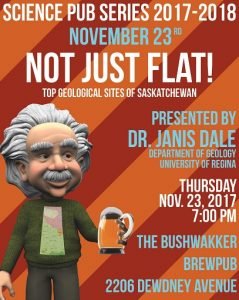 Nov. 25: BUSHWAKKER 29TH SINGLE MALT SCOTCH TASTING EVENT. One of our biggest events of the year! Experience six specialty imported single malt scotches including: Ardbeg Dark Cove, Edradour Ballechin, Lagavulin 8 Year, Clynelish Distiller’s Edition, Glen Scotia 15 Year and Gordon & McPhail Private Collection Tormore 2002 and performances from The Regina Police Services Pipes & Drums as well as The Regina Highland Dance Association.7:30 PM. Tickets: $84.95 each. This year’s optional scotch tasting meal offering is as follows: Highland Park Cornish Game Hen. This popular scotch tasting meal returns! Starts with a Braised Smoked Pork Hock in a Benromach scotch-infused mushroom broth. Then enjoy a Roast Cornish Game Hen with a Highland Park scotch Chasseur sauce stuffed with wild rice and served with trio of baby beets. Macallan Double Cask Chocolate Cherry Marquise. One of our most elegant dessert offerings to date! A rich chocolate dessert featuring chocolate sponge cake wrapped around rich, thick, fudgey, smooth, chocolate mousse. The scotch soaked cherries take this dessert over the top! So good that it hurts! Nov. 27: Monday Night Jazz & Blues. BRIAN BAGGETT. Experience the rich sound created by this Chapman Stick master. 8:00 PM. Nov. 29: Wednesday Night Folk. THE LATE LATE AUTUMN SINGER/SONGWRITER SHOWCASE. This popular event features a number of both veteran and up-and-coming Regina singer/songwriters including: Brandon Dickson, Katie Miller, Trent Leggott, Tommy Douglas, Regan Hinchcliffe, Neil Child and more! 8:00 PM. Dec 1: FIRST FIRKIN FRIDAY: Enjoy the pomp and circumstance of this long-standing Bushwakker monthly tradition. A keg of special beer is paraded throughout the brewpub in a procession led by a piper from The Regina Police Service Pipes & Drums. A volunteer is selected to wield the handmade wooden maul affectionately called The Mighty Firkin Wakker and attempt to tap the firkin in one mighty blow. This month’s firkin will be a special sneak peek Spiced Black Rum version of our upcoming Missiletow Christmas Ale. The suds-soaking spectacle takes place at 5:30 PM. Dec. 2: 2017 BLACKBERRY MEAD RELEASE We spend all year making our famous blackberry-infused Lumsden Valley honey nectar. An exotic elixir unlike any other. A new Bushwakker Mead Day “early bird” record was broken last year when eager customers began lining up at 3:45 on the Friday afternoon and camped out for over 19 hours. Some brought lawn chairs, some brought patio heaters, some brought sleeping bags, some brought heated ice fishing huts, some even brought BBQs and made bacon and eggs! Bushwakker head brewer, Michael Gaetz brings out cups of hot chocolate to those waiting in the line. We open our doors at 11:00 AM and in just a few hours all the bottles are snapped up by the legion of devoted Bushwakker Blackberry Mead fans. The supply of mead on tap usually lasts throughout the holiday season. Our limited edition 2017 “Blackberry Mead T-Shirt Slogan” contest winning t-shirts will also be available. The shirt image depicts the “Bee-tles.” Come Together, Right Now…Over MEAD!

By Purvai Dua More than 2,000 breweries now in Britain for the first time since the 1930s Just days after British Beer & Pub Association (BBPA) launched a new strategy to drive exports of the British beer by £100m over the next five years, it has now emerged that more than 300 new breweries have been launched in the UK in last year alone. According to a report by accountancy firm UHY Hacker Young, the number of breweries in Britain has broken the 2,000 barrier mark for the first time since the 1930s. The number of new breweries has risen 18% in 2016 to 1,994, taking growth over the past five years to 64%. “The craft beer boom has reversed around 70 years of consolidation in the brewing industry. There is plenty of growth still to come. However, the majors are beginning to make a fightback by acquiring craft brewers and launching their own artisan style brands,” said James Simmonds, partner at UHY Hacker Young. “The craft brewers can’t afford to rest on their laurels. They will need to work hard to get their product into that limited shelf space and bar space,” Simmonds added. Even smaller breweries have continued to benefit from a tax break introduced in 2002 by the then chancellor, Gordon Brown, paying 50% less beer duty than their larger counterparts, reports suggest. This boom in craft beer sales has prompted startups to offer specialist offers ranging from gluten-free beer to ale made from leftover bread, and also encouraged people interested in home brewing to raise money and open their own microbreweries. 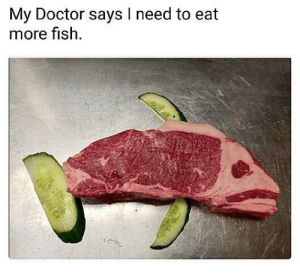 TIME OUT – Even More Actual Lines From Resumes