Bushwakker Prime Rib Weekends Return! Back by popular demand! Our melt-in-your-mouth, low-and-slow roasted prime rib dinners with jumbo Yorkshire pudding have returned. And Sunday suppers just got a whole lot better at the Bushwakker! Choose from either an 8 oz. or a 10 oz. cut. Prime rib is definitely one of Bushwakker executive chef Mike’s specialties. NEWS FROM THE BUSHWAKKER BREWERY. Bushwakker head brewer, MICHAEL GAETZ, reports the very popular TWO SONS MILK STOUT is now available.  The  BUSHVAR CZECH PILS is working its way through the brewery. Our brand new Bushwakker fruit beer, the BERRY CHERRY BLEND is receiving rave reviews. Our MISSILE "TOW” CHRISTMAS ALE has been brewed in preparation for its December 9th release. Brewer Michael is very happy with how this Christmas Ale is coming along. Our BLACKBERRY MEAD is also aging nicely in our cellar preparing for our December 2nd MEAD DAY! Be sure to enter our Blackberry Mead Day T-shirt Slogan Contest before November 11th. See below for details. Bushwakker Brewpub’s Writers Corner Seeks Books! Our 2nd Edition Writers Corner Launch will take place on Saturday, November 11 at 3:00 PM. We are seeking donations of recent publications (2015-2017 publication dates) from Saskatchewan authors (all genres) to help expand our library within the Writers Corner. The goal is to gradually increase the size of the library each year. More book shelves will be installed as the number of books increases. The books in the corner library will be available for patrons interested in reading works by local authors and the books are to remain in the brewpub at all times. To be considered for the library, books must be a minimum of 40 pages and professionally bound. Please drop off a copy of your recently published book (along with purchasing information which can be shared with brewpub patrons) to Grant Frew at Bushwakker. You can email Grant at bar@bushwakker.com. Rotating individual author biographies and brief book synopsis are featured in the brewpub’s weekly newsletter and social media channels on a regular basis. Tickets to our November 25th Single Malt Scotch Tasting Event are now on sale! This year’s featured single malts include: Ardbeg Dark Cove, Edradour Ballechin, Lagavulin 8 Year, Clynelish Distiller’s Edition, Glen Scotia 15 Year and Gordon & McPhail Private Collection Tormore 2002. Our premium wines for November are the CASILLERO DEL DIABLO DEVIL’S COLLECTION wines from Chile. The red is a Syrah/Cabernet Sauvignon and the white is a Chardonnay/Sauvignon Blanc. Both are $7.95 for a glass and $22.95 for a half litre. Our guest tap is currently pouring a Saskatoon Berry Saison from the Prairie Sun Brewery in Saskatoon; $5.95 for a half pint and $7.95 for a pint. Next up we will offer a Sour IPA from Nokomis Craft Ales and then an Autumn Saison from Black Bridge Brewery in Swift Current. Bushwakker 2017 Blackberry Mead Day Slogan Contest. We have received quite a number of submissions but we are looking for more! December 2nd is fast approaching and we are asking for your input in making our annual Blackberry Mead Release Event memorable, interactive and fun! We have incorporated a number of mead slogans over the years into the design of a limited edition Bushwakker Blackberry Mead t-shirt created by local artist, Gavin de Lint. “I Feel the Need for Mead”, “Mead Makes you Strong”, “Believe in Mead”, “A Friend with Mead is a Friend Indeed” are all previous examples. Now it’s your turn! Submit your 2017 Bushwakker Blackberry Mead Day slogans to bar manager Grant at bar@bushwakker.com by November 11th. He and Gavin will select the “most artistically inspiring” slogan in the creation of this year’s commemorative t-shirt. The person who submits the winning submission will receive a very special Bushwakker Blackberry Mead Package valued at over $100. Send as many submissions as you wish. Hurry! #MeadDay2017 The Bushwakker LOCAL ARTS WALL for the month of November features the talents of AMY DAWNS. Her artist bio is as follows: Amy is not your typical artist.  After waking up one morning and following a strong impulse in 2010 to try on painting, with no artistic experience or background, she never once looked back.  She leaped into this exploration like a curious child and play was the quality expression she began to re acquaint herself with.   Intuitively playing with color,  tools from her kitchen to nature; she fell in love with the creation process.   It was extremely therapeutic for her and she began to notice the more playful she was, the less attached she was to the outcome!  It was a liberating feeling which gave her more energy to keep painting. Amy’s painting journey has produced profound experiences from painting peoples bodies to raise awareness for positive body image, painting live on stage as a participant of the Artist Series, teaching intuitive painting classes, and creating customs soul paintings; just to name a few. Her inspiration comes from living life to the fullest and embracing all her relationships with an open heart.  You will often hear Amy say that painting has taught her everything about life and continues to do so. 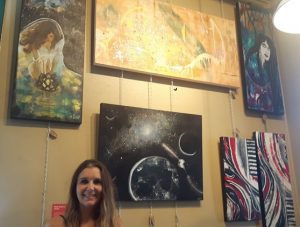 Nov. 11: Open at noon on Remembrance Day. Nov. 11: BUSHWAKKER WRITERS CORNER 2ND EDITION READING. Presented by the Saskatchewan Writers’ Guild and The Bushwakker Brewpub.  Join us for this 2nd edition “launch” of the Bushwakker Writers Corner, a space dedicated to celebrating recent works of Saskatchewan published authors. Enjoy readings from six local authors including: Catherine Milos, Bill Waiser, Chelsea Coupal, Anne McDonald, Emily Eaton and James Daschuk. It has become very apparent that local authors love Bushwakker desserts so a special Bourbon Caramel Apple Strudel will be made available that afternoon. 3:00 PM. Nov. 13: Monday Night Jazz & Blues. AZ PARIS. Talented rockin’ blues trio returns! 8:00 PM. Nov. 15: Wednesday Night Folk. DALE MAC. Regina based mainstream alternative/rock/roots act supporting a new EP. 8:00 PM. Nov. 20: Monday Night Jazz & Blues. JEFF MERTICK. Veteran singer/songwriter returns with his richly inspired New Orleans style of soul and blues. 8:00 PM. Nov. 22: Wednesday Night Folk. BRADFORD. Talented folk duo featuring Brad Papp and Mark Radford. 8:00 PM. Nov. 23: SCIENCE PUB. Not Just Flat! Top Geological Sites of Saskatchewan. Our wildly popular Science Pub Series has returned for a sixth incredible season! Enjoy lectures on scientific topics of general interest in our Arizona Room (main floor banquet room) over beer and snacks. The room opens at 5:00 PM and quite often is full by 6:00 PM. Avoid disappointment and come down early for dinner and a pint before the presentation which begins at 7:00 PM. This month's lecture will be presented by Dr. Janis Dale, Department of Geology, University of Regina. Did you know there were volcanoes in Saskatchewan?  Did you know that our province was once the bottom of a sea when giant reptiles patrolled its waters?  Did you know that there was as much as 2 km thick ice that covered most of Saskatchewan not once, not twice but at least five times and left behind many of the landscape features seen today?  Did you know that Saskatchewan is not all flat and has spectacular geological features?  You are invited to hear Dr. Dale’s top picks for the most amazing geological sites in Saskatchewan.  We will discuss what these features are, some of the theories on how they formed and where you can see them today! Nov. 25: BUSHWAKKER 29TH SINGLE MALT SCOTCH TASTING EVENT. One of our biggest events of the year! Experience six specialty imported single malt scotches and performances from The Regina Police Services Pipes & Drums as well as The Regina Highland Dance Association. 7:30 PM. Optional scotch – inspired meal and dessert offering will be available. Tickets $84.95 each.

MillerCoors Gets Snarky about the BA’s ‘Take Craft Back’ Campaign

From AmericanCraftBeer.com It’s more than a just little ironic, that the first Big Beer company to respond the Brewers Association’s faux crowdfunding campaign to purchase AB InBev, was not the target of the joke themselves…but MillerCoors. Writing for MillerCoors Behind the Beer, Peter Frost takes what only can be described as a passive-aggressive approach to the BA’s tongue-in-cheek initiative. After first announcing that MillerCoors is a member of the Brewers Association (a fact we found interesting of itself), Frost complains about the BA’s naming their campaign “Take Craft Back,” noting that, at least from his perspective, “the group does not make clear how, or if, it was lost.” But the author’s contrived confusion as to the point of the Brewers Association’s campaign speaks volumes…It also immediately clarifies the obvious…Frost is a spokesperson and propagandist for Big Beer…so whatever. He goes on to snarkily advise that shares of AB InBev’s stock “were unaffected by Brewers Association’s overture, closing up 0.3 percent on the New York Stock Exchange,” the day of the BA’s announcement. What the BA’s “Take Craft Back” launch didn’t crush AB InBev’s stock price? The Brewers Association has got to be bummed! Frost uses his Behind the Beer platform to also brag about MillerCoors own ‘craft’ division Tenth and Blake, whose holdings now include names like Terrapin Beer, Hop Valley, Revolver and St Archer Brewing. In his piece, he takes the opportunity to quote Tenth and Blake’s VP, Peter Marino, on the growing number of independent craft brewer’s showing interest in aligning themselves with his division… “If the number of inbound calls that we are getting is any indication, more and more independent craft brewers are open to the idea, or at the very least exploring their options to partner with a large brewer or financial partner.” We found Marino’s quote to be a particularly interesting, if not a somewhat ironic inclusion by Frost, who opened his article by feigning confusion as to what the Brewers Association meant by ‘Take Craft Back’ …as if Marino’s comment wasn’t exactly the BA’s point. Frost ends his take on the BA’s prank campaign, which he initially dismissed as a “marketing ploy,” by begrudgingly acknowledging its success… “The goal of any marketing campaign, of course, is to generate ink. Or pixels, as it were. In that, the Brewers Association has succeeded.” Again, a little passive-aggressive…no? 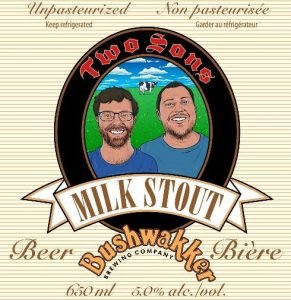 - Seek challenges that test my mind and body, since the two are usually inseparable. - Reason for leaving last job: The owner gave new meaning to the word paranoia. I prefer to elaborate privately. - Previous experience: Self-employed--a fiasco. - Exposure to German for two years, but many words are inappropriate for business. - Experience: Watered, groomed, and fed the family dog for years. - I am a rabid typist. - Education: College, August 1880 - May 1984. - I have a bachelorette degree in computers.