NEWS FROM THE BUSHWAKKER BREWERY. Bushwakker head brewer, MICHAEL GAETZ, reports when our Oktoberfest beer, HARVEST LAGER, runs out the NORTHERN STRONG LAGER will return. Our autumn specialty brew, the GREAT PUMPKIN SPICED BROWN ALE, is selling nicely and should last until our big Celtic Hallowe’en Party on October 28th. BUSHVAR CZECH PILS and another double batch of CHICO IPA are working their way through the brewery. Our very popular BLOOD ORANGE BLONDE ALE has returned. Our MISSILE "TOW” CHRISTMAS ALE has now been brewed in preparation for its December 9th release. Our BLACKBERRY MEAD is also aging nicely in our cellar preparing for our December 2nd MEAD DAY! Our guest tap is currently pouring Beet Picker Ale from Saskatoon’s 9 Mile Legacy Brewing; $5.95 for a half pint and $7.95 for a pint. Next up is Saskatoon Berry Saison from the Prairie Sun Brewery in Saskatoon. Following that we will offer a Sour IPA from Nokomis Craft Ales. Our premium wines for October are the INVISIBULL WINES from BC. The red is a Malbec and the white is a Sauvignon Blanc. Both are $7.50 for a glass and $19.95 for a half litre. Bushwakker Brewpub’s Writers Corner Seeks Books! Our 2nd Edition Writers Corner Launch will take place on Saturday, November 11 at 3:00 PM. We are seeking donations of recent publications (2015-2017 publication dates) from Saskatchewan authors (all genres) to help expand our library within the Writers Corner. The goal is to gradually increase the size of the library each year. More book shelves will be installed as the number of books increases. The books in the corner library will be available for patrons interested in reading works by local authors and the books are to remain in the brewpub at all times. To be considered for the library, books must be a minimum of 40 pages and professionally bound. Please drop off a copy of your recently published book (along with purchasing information which can be shared with brewpub patrons) to Grant Frew at Bushwakker. You can email Grant at bar@bushwakker.com. Rotating individual author biographies and brief book synopsis are featured in the brewpub’s weekly newsletter and social media channels on a regular basis. Save the date! Tickets to our November 25th Single Malt Scotch Tasting Event go on sale Sunday, October 29th at noon! Last year all 150 tickets sold out in just 35 minutes! 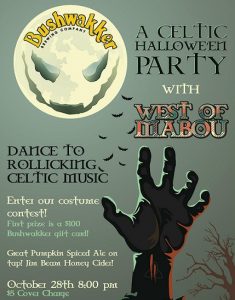 Oct. 29: TICKETS TO THE BUSHWAKKER 29TH SINGLE MALT SCOTCH TASTING EVENT GO ON SALE AT NOON! Come get in line early! Last year all 150 tickets sold out in only 35 minutes! Oct. 30: Monday Night Jazz & Blues. CALL ME MILDY. Blues/rock, slide & harmonica blues peppered with reggae-laden melodies. 8:00 PM. Nov. 1: Wednesday Night Folk. THE STRANGE VALENTINES. An Australian and a Nova Scotian sing about the jerks in the world. 8:00 PM. Nov. 1: MONTHLY ALES MEETING. If you are looking to improve your skills as a homebrewer then come rub elbows with some of the other enthusiastic homebrewers in your community. Each meeting features a different brewing topic as well as a featured beer style. New members are always welcome. This month’s presentation topic will be the Saison beer style. 8:00 PM Nov. 3: FIRST FIRKIN FRIDAY: Enjoy the pomp and circumstance of this long-standing Bushwakker monthly tradition. A keg of special beer is paraded throughout the brewpub in a procession led by a piper from The Regina Police Service Pipes & Drums. A volunteer is selected to wield the handmade wooden maul affectionately called The Mighty Firkin Wakker and attempt to tap the firkin in one mighty blow. The suds-soaking spectacle takes place at 5:30 PM. Nov. 4: SASK VS. EDMONTON. The final home game of the regular season. Kickoff is at 5:00 PM. Enjoy our gourmet EDMONTON BURGER & A PINT special for only $17.95. Come “devour” the competition! Nov 6: Monday Night Jazz & Blues. THE U OF R JAZZ BAND. Don’t miss their final Bushwakker performance of the year. Come hear Regina’s future jazz greats! 8:00 PM. Nov 8: Wednesday Night Folk. THE EMPIRE ASSOCIATES.  Powerful husband and wife folk duo. 8:00 PM. Nov. 11: Open at noon on Remembrance Day. Nov. 11: BUSHWAKKER WRITERS CORNER 2ND EDITION READING. Presented by the Saskatchewan Writers’ Guild and The Bushwakker Brewpub.  Join us for this 2nd edition “launch” of the Bushwakker  Writers Corner, a space dedicated to celebrating recent works of Saskatchewan published authors. Enjoy readings from six local authors including: Catherine Milos, Bill Waiser, Chelsea Coupal, Anne McDonald, Emily Eaton and James Daschuk. It has become very apparent that local authors love Bushwakker desserts so a special Bourbon Caramel Apple Strudel will be made available that afternoon. 3:00 PM.

By Patrick Gleason As a new football season commences in America, fans in many cities and towns will find it easier to prepare for tailgate parties and other fall weekend festivities thanks to moves taken by a number of states this year to remove antiquated restrictions on alcohol sales. In excess of 30 states reported budget shortfalls at the beginning of 2017. To balance budgets, some states have reduced spending and some have raised taxes. The most innovative lawmakers, however, are finding they can increase tax collections without raising taxes by removing unnecessary barriers to the sale of alcohol. State and local governments from coast to coast impose a host of restrictions on the sale of beer, wine, and spirits . Most are unjustified relics. Too often, the motivation to put and keep many of these restrictions in place has nothing to do with public health or safety concerns. Instead the ultimate purpose is to protect politically well-connected stakeholders from competition. In the process, these protectionist regulations also inhibit industry expansion and economic growth. Take South Carolina, where earlier this year state lawmakers enacted legislation that will remove restrictions on craft distillers’ ability to sell their product. This reform, which was signed into law in May, allows craft distillers to mix cocktails for customers visiting their tasting rooms and to serve up to three ounces of liquor, which equates to approximately two drinks. Before passage of this law, craft distillers in South Carolina were only allowed to serve up to 1.5 ounces per customer in their tasting rooms, which is basically a shot. Further inhibiting their ability to sell and market their products, spirits served on-site had to be consumed straight and could not be mixed as cocktail. “There’s a big difference between sipping a shot of bourbon and having an Old-Fashioned,” Brook Bristow, a beverage lawyer on John’s Island, explained to The State newspaper. “Now you can showcase these types of products in a medium where they are most often consumed.” Additionally, South Carolina distillers previously were only allowed to sell 750-mililiter bottles for off-site consumption, a quantity commonly referred to as a “fifth.” Under the new law passed this year, craft distillers will now be able to sell smaller sized bottles, such as mini-bottles and pints, for off-site consumption. By lifting statutory and regulatory shackles that serve no purpose, these new rules for South Carolina distillers will allow them to increase sales and grow their businesses, which will translate into more tax revenue for state and local coffers. Too often politicians look to impose new or higher taxes in order to raise revenue, when instead they could increase state funds by getting government out of the way. This isn’t the first time Palmetto State lawmakers have recognized the need to end misguided laws that impede commerce and depress economic growth. Back in 2013, then-Gov. Nikki Haley (R) signed the “Pint Law,” which removed regulatory impediments preventing microbreweries from flourishing in-state. Before then-Gov. Haley’s enactment of the Pint Law, South Carolina’s breweries were only allowed to sell 16 ounces of beer per customer and the product had to be served in four ounce glasses. Thanks to passage of the Pint Law, breweries can now sell 48 ounces of beer right from the tap. A year after passage of the Pint Law, state legislators and Gov. Haley approved the Stone Law, which permits breweries to sell food on premises. The Pint Law and Stone Law remain quintessential examples of how state lawmakers can promote economic growth by removing statutory and regulatory hurtles to expansion of commerce and industry growth. Wes Donehue; CEO of Push Digital and co-owner of Charleston, S.C.-based Frothy Beard Brewing Company & Zombie Bob’s Pizza; attributes the rapid expansion in the state's craft beer industry to the leadership of a new generation of reform-minded lawmakers in the South Carolina statehouse. "As a deep red Bible belt state, South Carolina has gone from being one of the least craft beer friendly states to one of the most craft beer friendly states because of a new crop of younger legislators. We've gone from 5 to 45 breweries in 5 years. The explosion has been insane,” Donehue said. 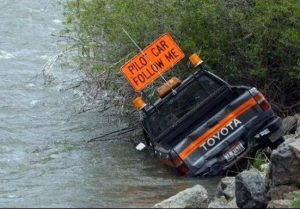