The Bushwakker is offering Smoked BBQ dishes every weekend this summer. Craft beer and BBQ pair wonderfully together! This weekend’s smoked feature is Smoked Beef Brisket w/ Apple Bourbon BBQ Sauce served with Mashed Potatoes & Corn on the Cob. $19.95 (Weather permitting.) NEWS FROM THE BUSHWAKKER BREWERY. A very special beer called WHEAT SOUP was launched last Saturday to commemorate the 40th anniversary of the Saskatchewan Filmpool. The brand name was inspired by the iconic Saskatchewan made film of the same title. This is a new German blonde wheat beer made with very non-flocculating yeast (hazy), certified Canadian organic malted wheat and seasoned with Middle-Eastern spices to acknowledge the birthplace of the lead actor in the film. Only 400 bottles were made available. Don’t miss out on picking up a commemorative bottle or tasting a pint of this special brew celebrating Saskatchewan cultural history! Bushwakker head brewer, MICHAEL GAETZ, reports the very popular PONCE DE LEON blackberry/black raspberry fruit ale is now on tap and in our offsale as is his brand new NORTHERN STRONG LAGER (a bigger version of our Northern Lights Lager.) Our small but very vocal group of English Best Bitter customers will be pleased to learn that our GRANNY’S BITTER has returned. Enjoy that one tank while you can! Our Oktoberfest beer, HARVEST LAGER, will be available the last week of September for our Oktoberfest Week celebration. BUSHVAR CZECH PILS is also working its way through the brewery! Our guest tap is currently pouring a Black Witbier from Saskatoon’s  9 Mile Legacy Brewing. $7.95 for a pint and $5.95 for a half pint. Next up we will feature an Oatmeal Session Pale Ale from Swift Current’s Black Bridge Brewery will be tapped. Our number one selling lager, NORTHERN LIGHTS LAGER is available for growler fills at the Quance Street SLGA store in Regina until September 17th. Three other new Saskatchewan-brewed beers are also available. Be sure to support this SLGA pilot program and help grow Saskatchewan craft beer! Our premium wines for September are from the Mission Hill Winery in BC. The red is a Five Vineyards Pinot Noir VQA; $8.95 for a glass and $23.95 for a half litre. The white is a Five Vineyards Pinot Blanc VQA; $7.95 for a glass and $21.95 for a half litre. We missed reporting the results of our Labour Day Weekend Three Day Burger Battle in last week’s edition. Our Winnipeg Burger proved to be just a tad more popular than our Sask Burger and won the contest 87 to 82.

Sept. 18: Monday Night Jazz & Blues. THE JAZZ BAND-ITS. The largest band to ever grace our stage plays big band, jazz and swing. 8:00 PM. Sept. 20: Wednesday Night Folk. LEXY DESJARLAIS. Bushwakker’s own singer/songwriter and guitar diva! 8:00 PM. Sept. 21: SCIENCE PUB – THE ECONOMICS OF LYING! Our wildly popular Science Pub Series returns for a sixth incredible season! Enjoy lectures on scientific topics of general interest in our Arizona Room (main floor banquet room) over beer and snacks. The room opens at 5:00 PM and quite often is full by 6:00 PM. Avoid disappointment and come down early for dinner and a pint before the presentation which begins at 7:00 PM. This month's lecture will be presented by Jason Childs, Associate Professor of Economics at The University of Regina. Have you ever lied?  Have you told a lie today?  Would you lie to your parents, best friend or spouse?  For $100?  For a million?  Would your parents, best friend, or spouse lie to you for $100?  Human beings lie a lot less than traditional economic theory predicts, but a lot more often than most of us would like to admit. Come explore the growing field of the economics of lying, including original research from the University of Regina.  We'll explore the theoretical underpinnings of the decision to lie and some of the factors that play into lying for profit. 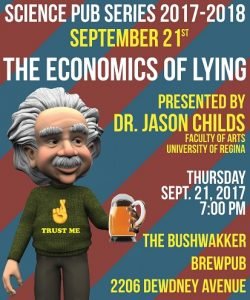 Sept. 24: SASK VS. CALGARY. We will be open at 11:00 AM and kick-off is at 2:00 PM. Be sure to stop by the Bushwakker before, during or after the game and enjoy our gourmet CALGARY BURGER & A PINT game day special. Delicious great value. Come “devour” the competition! Sept. 25: Monday Night Jazz & Blues. TERRAPLANE. Great “family” blues band lead by Regina’s friendliest bluesman, Shane Reoch. 8:00 PM. Sept. 25 – Oct. 1: BUSHWAKKER OKTOBERFEST WEEK! Enjoy German-inspired cuisine all week long. We have also special ordered a keg of Hofbrau Original Munich Helles for your drinking enjoyment. Prosit! Sept. 27: Wednesday Night Folk. THE ACCOMPLICE. Innovative one-man band delivers Grammy recognizable rock songs. 8:00 PM. Sept. 28: THE NEW, UNIQUE & RARE AMERICAN WHISKEY CHALLENGE: A formal sampling of six special premium American whiskies. Experience some very limited edition spirits as well as a sneak peek at some yet to be released products. Tickets only $25 each. Only 50 tickets will be made available. 7:00 PM in the Bushwakker Arizona Room. 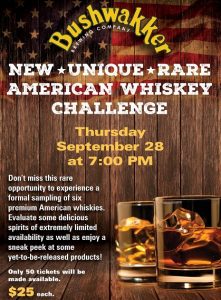 Consumers are increasingly willing to pay up for craft beer The Economist   Sept 2017 HONG KONG - Evidence unearthed at Mijiaya in Shaanxi province proved that the Chinese have an ancient tradition of making beer. Brewers were operating 5,000 years ago, using grains such as millet and Job’s tears (a kind of pearl barley). This year a couple of small-scale brewers lovingly recreated that Neolithic ale. The cloudy, hop-free beverage would challenge even the bravest microbrew devotee. Ladislao Raphael of Moonzen Brewery in Hong Kong describes it as “sour and funky”. Yet Mr. Raphael and his fellow craft-beer evangelists are winning converts.  The Chinese market, which is the world’s largest, is dominated by mass-produced lager. But craft breweries are sprouting up around the country—by 2016 there were around 150, up threefold from 2015. Consumption of their brews has surged by two-thirds over the past five years, figures from GlobalData show, even as overall beer-swilling declines. This mirrors a global pattern: consumers often crave better beers as they get richer. Trend-setters in affluent coastal regions are drinking less but pricier beer. Many craft breweries are foreign-run, but plenty are Chinese-owned too. It was foreigners who initially provided most business for Great Leap Brewing, a stalwart of Beijing’s craft scene, which set up in 2010 in a traditional courtyard down a dusty hutong (alleyway). Now 75% of its customers are locals, says Carl Setzer, its American brewmaster. Panda Brew, founded in Beijing by Pan Dinghao in 2013 with basic home-brewing equipment, recently began exporting to Britain. Distinctive local tastes have become a feature of the market. Wheat beers are popular, perhaps because they go well with Chinese food and locals like to combine carousing with chewing. Domestic brewers must also make the most of readily available ingredients. Barley in China is mostly poor quality and importing it is costly. Some brewers use exotic items like Sichuan peppers and Oolong tea, which appeal to a sense of local identity. Doing business in China is rarely hassle-free. Small importers buy craft beer on the grey market and treat it badly, skimping on the cold storage needed to keep it fresh on long journeys to Chinese bars and supermarkets. This risks sullying craft beer’s reputation for quality. Another frowned-on practice is “contract brewing”. Small breweries are subject to rules that stop them selling beyond their premises, which they often circumvent by tapping into bigger brewers’ capacity. Beverages made this way do not always meet craft-beer standards, but are still sold as such. Yet as demand for craft beer in America softens from recent highs, China’s market still promises much. In March the biggest brewer of them all, Belgium’s AB InBev, bought a stake in a Shanghai brewery called Boxing Cat. Beyond megalopolises such as Shanghai, speciality beers are selling well, even though microbrews can cost ten times as much as locally brewed lager. In contrast to the sour-tasting brews of China’s distant past, craft beer’s future on the mainland looks likely to be sweet.