The Bushwakker is offering Smoked BBQ dishes every weekend this summer. Craft beer and BBQ pair wonderfully together! This weekend’s smoked feature is Barbecued Back Ribs w/ Fries and Coleslaw $17.95. (Weather permitting). NEWS FROM THE BUSHWAKKER BREWERY. Our brand new MOTHERWELL RHUBARB RED FIFE WITBIER was officially released last Saturday at the Symphony Under The Sky festival at the Motherwell Homestead national historic site. This unique Canada 150th Anniversary collaborative Belgian-style wheat beer incorporates rhubarb juice from the Living Sky Winery near Saskatoon. This special beer sold very well and received rave reviews. Our next special brew is called WHEAT SOUP and was brewed to commemorate the 40th anniversary of the Saskatchewan Filmpool. The brand name was inspired by the iconic Saskatchewan made film of the same title. This is a brand new German blonde wheat beer made with very non-flocculating yeast (hazy), certified Canadian organic malted wheat, seasoned with middle eastern spices to acknowledge the birthplace of the lead actor in the film. Only 400 bottles will be made available and will be launched at 3:00 PM on Saturday, September 9th. Bushwakker head brewer, Michael Gaetz, is planning to brew another batch of the very popular PONCE DE LEON blackberry/black raspberry fruit ale soon. He also reports his brand new NORTHERN STRONG LAGER (a bigger version of our Northern Lights Lager) is working its way through the brewery as is our Oktoberfest beer, HARVEST LAGER. Congratulations to Marg Anderson! She was the winner of our Blackberry Mead Package Draw we conducted at the Symphony Under The Sky Festival at the Motherwell Homestead last weekend. Marg has won six bottles of our famous Blackberry Mead, a Bushwakker Blackberry Mead t-shirt and a set our new Bushwakker glassware. Of course Marg will not be able to claim her prize until the 2017 Blackberry Mead becomes available on Saturday, December 2nd. 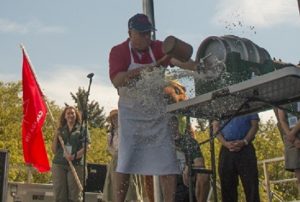 The honourbale Ralph Goodale, Minister of National Security and Emergency Preparedness, taps the Bushwakker Canada 150th Anniversary Motherwell Rhubarb Red Fife Witbier at the Symphony Under The Sky Festival at the Motherwell national historic site on August 26th. Our guest tap is currently pouring the Pineapple Wheat Burst from the Black Bridge Brewery in Swift Current. $7.95 for a pint and $5.95 for a half pint. Next up Yorkton’s Back Forty Brewery will make their Bushwakker debut with their Blueberry Wheat! Our number one selling lager, Northern Lights Lager is available for growler fills at the Quance Street SLGA store in Regina for the month of September. Three other new Saskatchewan brewed beers are also available. Be sure to support this SLGA pilot program and help grow Saskatchewan craft beer! Our premium wines for September are from the Mission Hill Winery in BC. The red is a Five Vineyards Pinot Noir VQA; $8.95 for a glass and $23.95 for a half litre. The white is a Five Vineyards Pinot Blanc VQA; $7.95 for a glass and $21.95 for a half litre.

Sept. 1: FIRST FIRKIN FRIDAY. Enjoy the pomp and circumstance of this longstanding Bushwakker monthly tradition! A piper from The Regina Police Services Pipes & Drums leads a small keg (the firkin) of special ale throughout the pub in a procession. A guest volunteer tapper is selected to wield the handmade wooden maul affectionately named, The Mighty Firkin Wakker, and attempt to tap the keg in one swift blow! The suds-soaking spectacular takes place at 5:30 PM. Sept. 1 - 4: LABOUR DAY LONG WEEKEND KEG EVENT. Receive free coasters, cups, ice and the use of a Bushwakker keg chiller tub and pump/faucet when you order any one of our four sizes of kegs for a long weekend. Place your order at least 24 hours in advance to avoid disappointment. Sept. 2, 3 & 4: LABOUR DAY CLASSIC THREE-DAY BURGER BATTLE. We welcome our many Manitoba friends who make their annual pilgrimage to the Bushwakker and (the new) Mosaic stadium. Sorry, no Saskatchewan craft beer at the stadium yet folks! This is also the only weekend of the year where you can choose from either our Winnipeg Burger & a Pint feature or our Saskatchewan Burger & a Pint feature. History has shown that the burger which sells the best prior to the game is a strong indicator as to which team will win the Labour Day Classic! 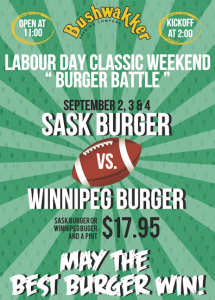 Sept. 3: THE LABOUR DAY CLASSIC. Can Team Green produce a Labour Day Classic win this year? Join the Sea of Green at the Bushwakker at 11:00 AM for our Saskatchewan Burger & a Pint or a Winnipeg Burger & a Pint feature and to discuss the probable outcome before the 2:00 PM kick-off. Meet “Back at the Bush” to conduct your post-game analysis. Sept. 4: OPEN LABOUR DAY MONDAY. Monday Night Jazz & Blues. ‘ROUND MIDNIGHT. Popular act plays popular jazz and popular adult contemporary tunes. 8:00 PM. Sept. 6: Wednesday Night Folk. BRADFORD. Talented acoustic guitar duo featuring Brad Papp and Mark Radford. 8:00 PM. Sept. 6: ALES CLUB MONTHLY MEETING. After a two month summer break, one of North America’s top ranked home brewing clubs is set to reconvene for another brewing season. The September meeting is historically the largest meeting of the year. If you are interested in getting into the art of home brewing or would like to improve your skills, come to the Bushwakker basement clubroom at 8:00 PM and discover what the ALES Club can offer you. This month's presentation topics include Kettle Sours and Cleaning and Sanitation. Sept. 9: SASKATCHEWAN FILMPOOL 40TH ANNIVERSARY COMMEMORATIVE BEER LAUNCH. Join members of the local film community as we celebrate 40 years of cultural enrichment. We have created a brand new German-style wheat beer named after the iconic Saskatchewan film, Wheat Soup. This one-time offering will be launched at 2:30 with the tapping of a firkin. Only 400 bottles of this one-time beer will be made available! 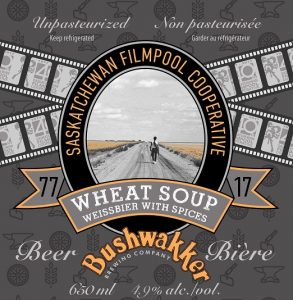 Budweiser taken aback by resentment over alliance with country star

BILL KAUFMANN, CALGARY HERALD Anger among the province’s craft beer devotees over country music singer Corb Lund’s participation in toasting Budweiser’s Alberta pedigree has surprised a spokesman for the brewing titan. And a country music colleague of Lund’s said while he may not be a Budweiser fan, he defended his friend’s partnership with the famous beer brand. Lund’s participation in Budweiser’s Alberta Made campaign has drawn the ire of some smaller brewers and their customers, who argue the musician is selling out and undermining the provincially based outfits. Those associated with the local craft brew industry should celebrate that promotional effort and Lund’s role in it, said Andrew Oosterhuis, marketing director for Budweiser Canada. “I’m surprised those brewers would take offence — they should step in and celebrate being part of the community,” said Oosterhuis. “We’re invested in Alberta to be stakeholders, that’s really the spirit of this.” Following a social media backlash, Lund posted an open letter to Albertans on his website explaining his decision, saying Budweiser is the beer choice of many in the cowboy culture he moves in, and that the move increases his exposure. Fellow Alberta country music artist Tim Hus agreed, saying he’s tipped a few brews with Lund while on the road between shows. “In some of the smaller towns and beer gardens, it’s not like they have a massive selection of beer, we often drink the big breweries because that’s all that’s available,” said the Sundre-area resident.  Hus said he knows Lund’s frequent taste for craft beer isn’t drowned by his Budweiser deal. “It’s like if you like Italian food, it doesn’t mean you’re attacking the sushi market,” he said. “And I understand Corb’s situation — he’s in business.” But Hus said his beer preference runs more to craft brews, whose quality and availability he’s seen steadily increase throughout his musical travels. It’s something he makes a point of enjoying. “I’ve always made an effort to drink local beer wherever we go because it kind of ties in with my songs that have been regional,” said Hus. Lund has also cultivated a persona of rural authenticity that’s become renowned. In 1988, Canadian-born folk-rocker Neil Young castigated artists for “selling out” to brands such as Budweiser with his song This Note’s for You. “Ain’t singin’ for Miller, don’t sing for Bud, I won’t sing for politicians, ain’t singin’ for Spuds,” Young sang. But Budweiser’s Oosterhuis said Lund’s role in his company’s campaign has genuine local underpinnings. “We kind of grew up in Alberta and trace our roots back to Alberta,” he said, adding its presence in the province dates back to 1980. Last year, the brewer purchased more than $100 million of product from Canadian farmers, said Oosterhuis. “We’ve had a huge Alberta economic impact,” he said.

The August 12 issue of the Economist newsmagazine contained an article on the rise of competitions involving the creation of puns. The article was titled “The quip and the dread”. Other of its own headline puns are an article on the shortage of housing in Britain “Rooms for Improvement”, On the short White House career of Anthony Scaramucci “Though Mooch is taken, Mooch abides”. Puns from elsewhere include one on the drunk driving charge against Tiger Woods “DUI of the Tiger”. The names of the contests themselves are creative; “Punderdome”, “Jargon Slayer”, “Words Nightmare”, “Pundamonium”, and “Bay Area Pun-Off”. A book on Puns is titled “Away with Puns”. On the more elaborate side, we note that Mahatma Gandhi walked barefoot and often fasted, which lead to bad breath; making him a “super calloused fragile mystic hexed by halitosis”.
Weekend BBQ Feature:  Barbequed Back Ribs w/ Fries and Coleslaw $17.95. (Weather permitting).