The Bushwakker is offering Smoked BBQ dishes every weekend this summer. Craft beer and BBQ pair wonderfully together! This weekend’s BBQ feature is Smoked Mesquite Chicken on a Jalapeno Cheddar Red Fife Bun topped with Peach Rhubarb Salsa & Basil Crème $17.95. (Weather permitting).   NEWS FROM THE BUSHWAKKER BREWERY. Our brand new MOTHERWELL RHUBARB RED FIFE WITBIER will be officially released on Saturday, August 26 at the Symphony Under The Sky festival at the Motherwell Homestead national historic site near Abernethy, Saskatchewan. This unique Canada 150th Anniversary collaborative Belgian-style wheat beer incorporates rhubarb juice from the Living Sky Winery near Saskatoon. This special beer will also be available at The Bushwakker on tap and in our offsale that day too. It will also be available for growler fills. Our new STRAZZBERRY BLONDE ALE continues to receive rave reviews from our growing legion of fruit beer fans. Bushwakker head brewer, Michael Gaetz, is planning to brew another batch of the very popular PONCE DE LEON blackberry/black raspberry fruit ale soon. He also reports his brand new NORTHERN STRONG LAGER (a bigger version of our Northern Lights Lager) is working its way through the brewery. Our guest tap is currently pouring Vino Lager, a Chardonnay barrel-aged Munich Helles from the District Brewing Company in Regina. $7.95 for a pint and $5.95 for a half pint. Next up we will feature the Pineapple Wheat Burst from the Black Bridge Brewery in Swift Current. Then Yorkton’s Back Forty Brewery will make their Bushwakker debut with their Blueberry Wheat! Our smooth, malty and crisp Last Mountain Vienna Lager is available for growler fills at the Quance Street SLGA store in Regina for the month of August and our number one selling lager, Northern Lights Lager will be available for September. Three other new Saskatchewan brewed beers are also available. Be sure to support this SLGA pilot program and help grow Saskatchewan craft beer! Our premium wines for August are Vintage Ink VQA from the Okanagan. Their Rebel Red is a Shiraz/Merlot/Cabernet Sauvignon and their Wild White is a Viognier/Gewurztraminer; both are $8.50 for a glass and $23.95 for a half litre. 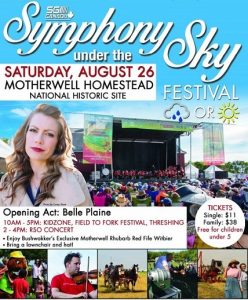 Our Canada 150th Anniversary collaborative brew with Living Sky Winery will be officially launched at the Symphony Under The Sky Festival at the Motherwell Homestead National Historic Site on Aug. 26. This limited edition beer will also be available at The Bushwakker. Aug. 28: Monday Night Jazz & Blues. TERRAPLANE. Great blues band lead by Regina’s friendliest bluesman, Shane Reoch. 8:00 PM. Aug. 30: Wednesday Night Folk. THE SUMMER SINGER/SONGWRITER SHOWCASE. This popular event features a number of both veteran and up-and-coming Regina singer/songwriters including Tom Douglas, Devon Floyd, Trent Leggott, Regan Hinchcliffe, Mark Wilson, Neil Child and more! 8:00 PM. Sept. 1: FIRST FIRKIN FRIDAY. Enjoy the pomp and circumstance of this longstanding Bushwakker monthly tradition! A piper from The Regina Police Services Pipes & Drums leads a small keg (the firkin) of special ale throughout the pub in a procession. A guest volunteer tapper is selected to wield the handmade wooden maul affectionately named, The Mighty Firkin Wakker, and attempt to tap the keg in one swift blow! The suds-soaking spectacular takes place at 5:30 PM. Sept. 1 - 4: LABOUR DAY LONG WEEKEND KEG EVENT. Receive free coasters, cups, ice and the use of a Bushwakker keg chiller tub and pump/faucet when you order any one of our four sizes of kegs for a long weekend. Place your order at least 24 hours in advance to avoid disappointment. Sept. 2, 3 & 4: LABOUR DAY CLASSIC THREE-DAY BURGER BATTLE. We welcome our many Manitoba friends who make their annual pilgrimage to the Bushwakker and (the new) Mosaic stadium. Sorry, no Saskatchewan craft beer at the stadium yet folks! This is also the only weekend of the year where you can choose from either our Winnipeg Burger & a Pint feature or our Saskatchewan Burger & a Pint feature. History has shown that the burger which sells the best prior to the game is a strong indicator as to which team will win the Labour Day Classic! Sept. 3: THE LABOUR DAY CLASSIC. Can Team Green produce a Labour Day Classic win this year? Join the Sea of Green at the Bushwakker at 11:00 AM for our Saskatchewan Burger & a Pint or a Winnipeg Burger & a Pint feature and to discuss the probable outcome before the 2:00 PM kick-off. Meet “Back at the Bush” to conduct your post-game analysis. Sept. 4: OPEN LABOUR DAY MONDAY. Monday Night Jazz & Blues. ‘ROUND MIDNIGHT. Popular act plays popular jazz and popular adult contemporary tunes. 8:00 PM. Sept. 6: Wednesday Night Folk. BRADFORD. Talented acoustic guitar duo featuring Brad Papp and Mark Radford. 8:00 PM. Sept. 6: ALES CLUB MONTHLY MEETING. After a two month summer break, one of North America’s top ranked home brewing clubs is set to reconvene for another brewing season. The September meeting is historically the largest meeting of the year. If you are interested in getting into the art of home brewing or would like to improve your skills, come to the Bushwakker basement clubroom at 8:00 PM and discover what the ALES Club can offer you. Sept. 9: SASKATCHEWAN FILMPOOL 40TH ANNIVERSARY COMMEMORATIVE BEER LAUNCH. Join members of the local film community as we celebrate 40 years of cultural enrichment. We have created a brand new German-style wheat beer named after the iconic Saskatchewan film, Wheat Soup. This one-time offering will be launched at 2:30 with the tapping of a firkin. Only 400 bottles of this one-time beer will be made available! Sept. 11: Monday Night Jazz & Blues. JEFF MERTICK & JASON FISKE. Soulful veteran Regina bluesman is joined by a talented ivory tickler. 8:00 PM. Sept. 13: Wednesday Night Folk – special edition. AN AUTUMN CEILIDH WITH BILLARNEY. This very popular & very large acoustic Celtic band returns! 8:00 PM. Sept. 18: Monday Night Jazz & Blues. THE JAZZ BAND-ITS. The largest band to ever grace our stage plays big band, jazz and swing. 8:00 PM. Sept. 20: Wednesday Night Folk. NEIL CROWE. Indie rock, music maker, booty shaker from Ontario makes his Bushwakker debut. 8:00 PM. Sept. 21: SCIENCE PUB – THE ECONOMICS OF LYING! Our wildly popular Science Pub Series returns for a sixth incredible season! Enjoy lectures on scientific topics of general interest in our Arizona Room (main floor banquet room) over beer and snacks. The room opens at 5:00 PM and quite often is full by 6:00 PM. Avoid disappointment and come down early for dinner and a pint before the presentation which begins at 7:00 PM. This month's lecture will be presented by Jason Childs, Associate Professor of Economics at The University of Regina. Have you ever lied?  Have you told a lie today?  Would you lie to your parents, best friend or spouse?  For $100?  For a million?  Would your parents, best friend, or spouse lie to you for $100?  Human beings lie a lot less than traditional economic theory predicts, but a lot more often than most of us would like to admit. Come explore the growing field of the economics of lying, including original research from the University of Regina.  We'll explore the theoretical underpinnings of the decision to lie and some of the factors that play into lying for profit. Sept. 24: SASK VS. CALGARY. We will be open at 11:00 AM and kick-off is at 2:00 PM. Be sure to stop by the Bushwakker before, during or after the game and enjoy our gourmet CALGARY BURGER & A PINT game day special. Delicious great value. Come “devour” the competition! Sept. 25: Monday Night Jazz & Blues. TERRAPLANE. Great “family” blues band lead by Regina’s friendliest bluesman, Shane Reoch. 8:00 PM. Sept. 25 – Oct. 1: BUSHWAKKER OKTOBERFEST WEEK! 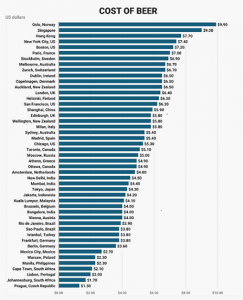 TIME OUT- Too Tired To Go On