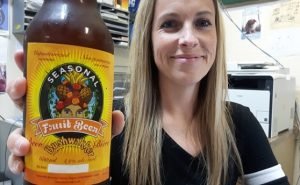 Our brand new STRAZZBERRY BLONDE ALE is now available in our offsale! In keeping with Bushwakker family tradition, office manager, Kristen Welisch (Michael’s sister), served as the inspiration for our new fruit beer label. Our smooth, malty and crisp Last Mountain Vienna Lager is available for growler fills at the Quance Street SLGA store in Regina for the month of August. Three other new Saskatchewan brewed beers are also available. Be sure to support this SLGA pilot program and help grow Saskatchewan craft beer! Our premium wines for August are Vintage Ink VQA from the Okanagan. Their Rebel Red is a Shiraz/Merlot/Cabernet Sauvignon and their Wild White is a Viognier/Gewurztraminer; both are $8.50 for a glass and $23.95 for a half litre.

Aug. 18: Motherwell Red Fife Rhubarb Witbier Firkin Preview. The Bushwakker is a proud partner with Parks Canada and Living Sky Winery this summer and will once again brew the extremely popular Motherwell Homestead commemorative brew, but with a special Canadian 150th Anniversary twist! To acknowledge the fact that William Motherwell abstained from alcohol and preferred rhubarb tea, this year’s Motherwell Red Fife Witbier will utilize the historic Red Fife wheat as well as rhubarb juice from Saskatchewan’s Living Sky Winery. This special Belgian-style wheat beer will be officially released at The Symphony Under The Sky event at the Motherwell Homestead on Saturday, August 26 but you can get a sneak peek on August 19. Motherwell Homestead interpreters will be at the Bushwakker for a special Firkin Preview tapping. They will be wearing period dress, and will briefly describe the big Motherwell Threshing Day/SUTS Grand Event. 5:30 PM. Aug. 21: Monday Night Jazz & Blues. THE JAZZ BAND-ITS.  The largest act to ever grace the Bushwakker stage plays big band, jazz and swing – loud and proud! 8:00 PM. Aug. 23: Wednesday Night Folk. THE EMPIRE ASSOCIATES. Talented husband and wife folk duo returns for an encore performance. 8:00 PM. Aug. 26: Motherwell Red Fife Rhubarb Witbier Release at the Motherwell Homestead. Our Motherwell Red Fife Witbier infused with rhubarb juice from Living Sky Winery. A limited number of commemorative bottles will be produced. The label will depict an original painting of the Motherwell Homestead painted by Shannon Sambells who is William Motherwell’s great, great granddaughter. Makes a great Canadian 150th Anniversary keepsake! Will be available on tap and in bottles at The Bushwakker and at the Regina Symphony Orchestra’s Symphony Under the Sky at the Motherwell Homestead. Aug. 28: Monday Night Jazz & Blues. TERRAPLANE. Great blues band lead by Regina’s friendliest bluesman, Shane Reoch. 8:00 PM. Aug. 30: Wednesday Night Folk. THE SUMMER SINGER/SONGWRITER SHOWCASE. This popular event features a number of both veteran and up-and-coming Regina singer/songwriters including Tom Douglas, Devon Floyd, Trent Leggott, Regan Hinchcliffe, Mark Wilson, Neil Child and more! 8:00 PM. Sept. 1: FIRST FIRKIN FRIDAY. Enjoy the pomp and circumstance of this longstanding Bushwakker monthly tradition! A piper from The Regina Police Services Pipes & Drums leads a small keg (the firkin) of special ale throughout the pub in a procession. A guest volunteer tapper is selected to wield the handmade wooden maul affectionately named, The Mighty Firkin Wakker, and attempt to tap the keg in one swift blow! The suds-soaking spectacular takes place at 5:30 PM. Sept. 1 - 4: LABOUR DAY LONG WEEKEND KEG EVENT. Receive free coasters, cups, ice and the use of a Bushwakker keg chiller tub and pump/faucet when you order any one of our four sizes of kegs for a long weekend. Place your order at least 24 hours in advance to avoid disappointment. Sept. 2, 3 & 4: LABOUR DAY CLASSIC THREE-DAY BURGER BATTLE. We welcome our many Manitoba friends who make their annual pilgrimage to the Bushwakker and (the new) Mosaic stadium. Sorry, no Saskatchewan craft beer at the stadium yet folks! This is also the only weekend of the year where you can choose from either our Winnipeg Burger & a Pint feature or our Saskatchewan Burger & a Pint feature. History has shown that the burger which sells the best prior to the game is a strong indicator as to which team will win the Labour Day Classic! Sept. 3: THE LABOUR DAY CLASSIC. Can Team Green produce a Labour Day Classic win this year? Join the Sea of Green at the Bushwakker at 11:00 AM for our Saskatchewan Burger & a Pint or a Winnipeg Burger & a Pint feature and to discuss the probable outcome before the 2:00 PM kick-off. Meet “Back at the Bush” to conduct your post-game analysis. Sept. 4: OPEN LABOUR DAY MONDAY. Monday Night Jazz & Blues. ‘ROUND MIDNIGHT. Popular act plays popular jazz and popular adult contemporary tunes. 8:00 PM.

By Jason Foster onbeer.org The Brewers’ Association (BA) in the U.S. has just launched a “Certified Independent Craft Brewer” seal. The seal, an upside down bottle indicating certified independence, is designed to identify which breweries in the States are not owned by one of the big corporate breweries. The BA says more than 1500 breweries have signed onto the certification, placing the seal somewhere on their packaging. The seal is a clear response by BA to the big boys’ recent efforts to buy up successful craft brewers as well as to launch their own pseudo-craft brands to compete against authentic craft brewers. On the surface it seems like a good idea – find a way to differentiate real craft from pseudo-craft and give consumers an easy-to-find marker to establish authenticity. Organic and fair trade products have been doing this for years, quite successfully. Consumers know which labels mean something and therefore the system is more legitimate and reliable all around. In that context an independent craft brewery certification seal makes sense. It is a way to quickly demarcate real craft from faux craft. Maybe. But overall I believe it is a misguided strategy that obfuscates certain hard facts about the beer industry. Allow me to summarize a few of my concerns. First, there is the issue of definition. What exactly does “independent” mean? For the BA it means no more than 25% of the brewery can be owned by a non-craft brewer. Is that truly independent? Case in point, last week news broke that Heineken, through wholly-owned Lagunitas, is buying a 20% stake in Michigan brewery Short’s Brewing. By the BA definition, Short’s continues to be considered “independent” despite their new corporate partners. I am somewhat dubious. The BA also has a size requirement, kind of. To be eligible you must produce less than six million barrels (about 7.2 million HL) of beer annually. That is a lot of beer. To put it in perspective that limit is more than three times the annual production of the Edmonton Labatt plant. At that size, is the independence of the ownership the most important factor in determining if the brewery is legitimately craft or not? Second, and this really is the core of my concern, is that the seal ignores fundamental realities of the beer industry – that it is a capitalist venture. The vast majority of BA members are corporations (there are a handful of co-operatives and employee-owned breweries). They are for-profit enterprises which (hopefully) generate value and revenue for their owners. They don’t produce beer for the good of the community, but to make money. What, at its core, is the difference between a large, multi-national corporation and a relatively small, independent corporation, other than scale? What happens when that independent corporation becomes rather large, such as Boston Beer Co.? Does that change the picture? Let me immediately contradict my own point by highlighting that I do think there is a difference. The ABInbev’s of the world are transactional enterprises first and beer-makers second. An independent brewery is still about beer first and foremost, and that matters. Craft brewers are, for the most part, about building a culture of beer, which also matters. I support fair trade and organic certification because they tell me something specific and significant about the product. The certification verifies that it was produced ethically/without pesticides/etc. I can then make my choice. What does an independent seal on my beer really tell me? It tells me it is not owned by one of the big corporate brewers, that is all. For some that is enough. And fair enough. For me it isn’t though. What matters more is that the brewery is anchored in a community. That they come from the community and produce beer for people in the community. That connection is more important than ownership, at the end of the day. Emphasizing local still locks out the corporate brewers, who long since traded in their community cards for global dominance, but it also allows the consumer to make cleaner distinctions about other aspects of the beer. Promoting the independent ownership of craft brewers isn’t a bad thing. I am supportive of almost anything that undermines the hegemony of the corporate brewers. But I find the BA’s efforts on this front to be more than a little misleading. They are trading on the public’s image of craft brewers as small, local and plucky. The reality is that many of the players in the industry (including Canada), they have long moved past that stage. And having done so, the line between them and the big corporate brewers is thinner than the BA would like to admit. 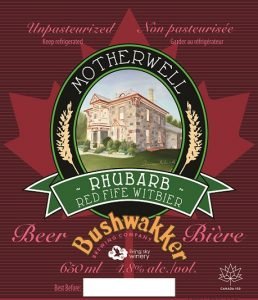 The Bushwakker celebrates Canada’s 150th anniversary with a limited edition collaborative brew. Only 400 bottles will be filled and a small amount will be available on tap. Official release date: Sat., Aug. 26. Firkin preview tapping date: Fri, Aug., 18 at 5:30.