The Bushwakker is offering Smoked BBQ dishes every weekend this summer. Craft beer and BBQ pair wonderfully together! This weekend’s BBQ feature is Applewood Smoked Pulled Pork, Jalapeno Mac N’ Cheese w/ Southwest Salad $15.95 (Weather permitting). Our guest tap is currently pouring Vino Lager, a Chardonnay barrel-aged Munich Helles from the District Brewing Company in Regina. $7.95 for a pint and $5.95 for a half pint. Following that, Yorkton’s Back Forty Brewery will make their Bushwakker debut with their Blueberry Wheat! Our smooth, malty and crisp Last Mountain Vienna Lager is available for growler fills at the Quance Street SLGA store in Regina for the month of August. Three other new Saskatchewan brewed beers are also available. Be sure to support this SLGA pilot program and help grow Saskatchewan craft beer! Our premium wines for August are Vintage Ink VQA from the Okanagan. Their Rebel Red is a Shiraz/Merlot/Cabernet Sauvignon and their Wild White is a Viognier/Gewurztraminer; both are $8.50 for a glass and $23.95 for a half litre. The Bushwakker Local Arts Wall for the month of August features the works of husband and wife artists, Cristian Barreno and Addy Maldonado. Cristian is originally from Guatemala and moved to Regina 15 years ago. He has been painting for almost 20 years and his work has evolved from painting the people and landscapes of Guatemala to a blend of multiculturalism and fantasy due the wide perspective he has gained from living in Canada. He paints predominantly with acrylics and oils and he often explores new themes or techniques in each of his pieces. Addy is a self-taught artist born and raised in Mexico. She moved to Regina five years ago.  Addy defines her work as folk art, and the subjects of her paintings are mostly pets and nature. Her vibrant colors and designs are deeply connected with her Mexican heritage. Acrylics, watercolors and crochet are the most common media she uses.     Enjoy the vibrant colours of this talented couple all this month! 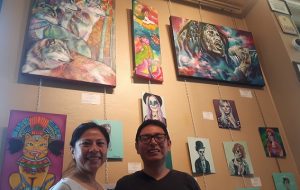 Aug 13: SASK VS. BC LIONS. We will be open at noon as we are every Sunday AND WILL BE CLOSED AT 9:00 PM. Kick-off is at 6:00. Be sure to stop by the Bushwakker before or during the game and enjoy our gourmet BC BURGER & A PINT game day special. Come “devour” the competition! Aug. 14: Monday Night Jazz & Blues. SMALL CITY SOUL. Talented jazz trio lead by one powerful female vocalist! 8:00 PM. Aug. 16: Wednesday Night Folk – Special Edition. JAY SEMKO. Iconic singer/songwriter from The Northern Pikes delivers a special solo show. 8:00 PM. Aug. 18: Motherwell Red Fife Rhubarb Witbier Firkin Preview. The Bushwakker is a proud partner of Parks Canada and Living Sky Winery this summer and will once again brew the extremely popular Motherwell Homestead commemorative brew, but with a special Canadian 150th Anniversary twist! To acknowledge the fact that William Motherwell abstained from alcohol and preferred rhubarb tea, this year’s Motherwell Red Fife Witbier will utilize the historic Red Fife wheat as well as rhubarb juice from Saskatchewan’s Living Sky Winery. This special Belgian-style wheat beer will be officially released at The Symphony Under The Sky event at the Motherwell Homestead on Saturday, August 26 but you can get a sneak peek on August 19. Motherwell Homestead interpreters will be at the Bushwakker for a special Firkin Preview tapping. They will be wearing period dress, and will briefly describe the big Motherwell Threshing Day/SUTS Grand Event. 5:30 PM. Aug. 21: Monday Night Jazz & Blues. THE JAZZ BAND-ITS.  The largest act to ever grace the Bushwakker stage plays big band, jazz and swing – loud and proud! 8:00 PM. Aug. 23: Wednesday Night Folk. THE EMPIRE ASSOCIATES. Talented husband and wife folk duo returns for an encore performance. 8:00 PM. Aug. 26: Motherwell Red Fife Rhubarb Witbier Release at the Motherwell Homestead. Our Motherwell Red Fife Witbier infused with rhubarb juice from Living Sky Winery. A limited number of commemorative bottles will be produced. The label will depict an original painting of the Motherwell Homestead painted by Shannon Sambells who is William Motherwell’s great, great granddaughter. Makes a great Canadian 150th Anniversary keepsake! Will be available on tap and in bottles at The Bushwakker and at the Regina Symphony Orchestra’s Symphony Under the Sky at the Motherwell Homestead. Aug. 28: Monday Night Jazz & Blues. TERRAPLANE. Great blues band lead by Regina’s friendliest bluesman, Shane Reoch. 8:00 PM. Aug. 30: Wednesday Night Folk. THE SUMMER SINGER/SONGWRITER SHOWCASE. This popular event features a number of both veteran and up-and-coming Regina singer/songwriters including Tom Douglas, Devon Floyd, Trent Leggott, Regan Hinchcliffe, Mark Wilson, Neil Child and more! 8:00 PM.

Bitter Battle Between Big Beer and Craft Brewers Gets Uglier

A man went to church one day and afterward he stopped to shake the preacher's hand. He said, 'Preacher, I’ll tell you, that was a damned fine sermon. Damned good!' The preacher said, 'Thank you sir, but I'd rather you didn't use profanity.' The man said, 'I was so damned impressed with that sermon I put five thousand dollars in the offering plate!' The preacher said, 'No shit?'