The Bushwakker is offering Smoked BBQ dishes every weekend this summer. Craft beer and BBQ pair wonderfully together! This weekend’s BBQ feature is: SMOKED BEEF STRIPLOIN W/ YORKIE PUDDING, BROCCOLI & GARLIC MASHED. $19.95.  (Weather permitting). Our guest tap is currently pouring a special collaboration Kellerbier involving Vancouver’s Central City Brewers & Distillers and Swift Current’s Black Bridge Brewing. This Bavarian Pilsner packs a hoppy punch! $7.95 for a pint and $5.95 for a half pint.  Up next Saskatoon’s 9 Mile Legacy Brewing returns with their Bocephus White IPA. Our premium red wine for July is Radio Boka Tempranillo from Spain: $7.50 for a glass and $21.95 for a half litre. The white is Santa Julia + Chardonnay from Argentina: $8.50 for a glass and $23.95 for a half litre. Tickets are now available to our SUMMER EXOTIC FRUIT BEER TASTING EVENT which will take place on Thursday, August 10 at 7:00 PM in the Bushwakker Arizona Room. Evaluate 10 unique specialty imported fruit beers including a Guava IPA, Blueberry Saison, Passion Fruit Berliner Weisse, Cherry Quadrupel, Blood Orange Gose, Cherry Lambic, Yumberry Berliner Weisse, Blackberry Porter, Raspberry Saison and Chardonnay Barrel Aged Belgian-Style Peach Ale! Only 50 tickets will be made available. $36.95 each.

July 21 & 22: YQR BEER FESTIVAL. The Bushwakker will be pouring three unique brews at this brand new outdoor event which will feature over 100 beers available for sampling. Held on the grounds in front of the Conexus Arts Centre from 5:00 – 11:00. Food trucks, live local music and the Saskatchewan Craft Beer Lane will showcase many of the small breweries found in our province. Wines, spirits and coolers will be available too. Event goes on rain or shine. Bring a lawn chair. Early bird tickets are $36 and available at the Conexus Arts Centre. https://www.facebook.com/events/200710270448476/ July 24: Monday Night Jazz & Blues. A STORRY WITH HUGHES. Talented guitarmen, Billy Hughes and Jeff Storry deliver powerful acoustic blues. 8:00 PM. July 26: Wednesday Night Folk. MAVERICK CINEMA. Vancouver Island folk rockers make their Bushwakker debut. 8:00 PM. July 29: SASK VS. TORONTO. Kick-off is at 4:30. Be sure to stop by the Bushwakker before, during or after the game and enjoy our gourmet TORONTO BURGER & A PINT game day special. July 31: Monday Night Jazz & Blues. AZ PARIS TRIO. Veteran blues-man returns for another high-energy blues performance. 8:00 PM. Aug. 2: Wednesday Night Folk Night. THE STRANGE VALENTINES.  An Australian & Nova Scotian sing about the jerks in the world! 8:00 PM. Aug. 3: IPA DAY. Join us as IPA fans around the world celebrate what has become the symbolic beer of the entire craft beer movement. Our kitchen will offer a tasty feature incorporating this iconic beer style as an ingredient. Bushwakker head brewer, Michael Gaetz, will introduce his brand new MANGO IPA. Aug. 4: FIRST FIRKIN FRIDAY. Enjoy the pomp and circumstance of this longstanding Bushwakker monthly tradition! A piper from The Regina Police Services Pipes & Drums leads a small keg (the firkin) of special ale throughout the pub in a procession. A guest volunteer tapper is selected to wield the handmade wooden maul affectionately named, The Mighty Firkin Wakker, and attempt to tap the keg in one swift blow! The suds-soaking spectacular takes place at 5:30 PM. Aug. 5: FOOD DAY CANADA 2017. The largest food event in the country encourages people to celebrate local food and community. The Bushwakker will once again participate and Bushwakker executive Chef, Mike Monette, will source some fresh local bounty to create a very delicious and truly Saskatchewan dish. Aug. 7: CLOSED FOR THE HOLIDAY. Happy Saskatchewan Day! Aug. 9: Wednesday Night Folk. DALE MAC. Alt/roots-rock and blues from this talented trio. 8:00 PM. Aug 10: SUMMER EXOTIC FRUIT BEER TASTING EVENT. Experience 10 unique specialty imported fruit beers. Tickets $36.95. 7:00 PM. 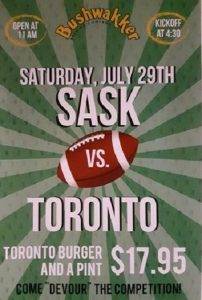 Guest Beers in Your Brewpub or Brewery Taproom 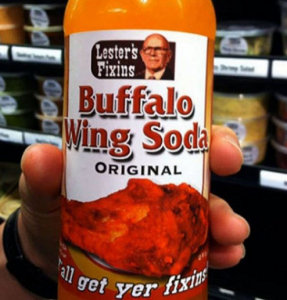 And we thought our Screamin’ Mosquito Chili Beer was hot!

A city slicker shoots a duck out in the country. As he's retrieving it, a farmer walks up and stops him, claiming that since the duck is on his farm, it technically belongs to him. After minutes of arguing, the farmer proposes they settle the matter "country style." "What's country style?" asks the city boy. "Out here in the country," the farmer says, "when two fellers have a dispute, one feller kicks the other one in the balls as hard as he can. Then that feller, he kicks the first one as hard as he can. And so forth. Last man standin' wins the dispute." Warily the city boy agrees and prepares himself. The farmer hauls off and kicks him in the groin with all his might. The city boy falls to the ground in the most intense pain he's ever felt, crying like a baby and coughing up blood. Finally he staggers to his feet and says, "All right, n-now it's–it's m-my turn." The farmer grins. "Aw, hell, you win. Keep the duck."