The Bushwakker is offering Smoked BBQ dishes every weekend this summer. Craft beer and BBQ pair wonderfully together! This weekend’s BBQ feature is Applewood Smoked Pulled Chicken Sliders w/ Sweet Potato Chips. $15.95 (Weather permitting). Our guest tap is currently pouring a Chocolate Stout from Regina’s Pile O’ Bones Brewing: $7.95 for a pint and $5.95 for a half pint.  Following that we will pour a special collaboration Kellerbier involving Vancouver’s Central City Brewers & Distillers and Swift Current’s Black Bridge Brewing. This Bavarian Pilsner packs a hoppy punch! Saskatoon’s 9 Mile Legacy Brewing then returns with their Bocephus White IPA. Our premium red wine for July is Radio Boka Tempranillo from Spain: $7.50 for a glass and $21.95 for a half litre. The white is Santa Julia + Chardonnay from Argentina: $8.50 for a glass and $23.95 for a half litre. 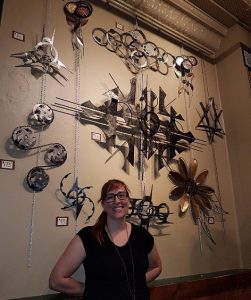 JULY BUSHWAKKER LOCAL ARTS WALL FEATURED ARTIST: SHAUNA PERFECT Shauna is a Bushwakker supervisor as well as one of our most popular artists. Her works sell fast so don’t delay if you are looking for a unique piece for your home. Her artist biography is as follows: Born and raised in Regina, art has always been a big part of my family in many different mediums. I grew up watching my dad make metal sculptures and decided a few years ago that I wanted to give it a try. I went to school to learn the basics and am now an apprentice welder with the hopes of becoming a journeyperson welder. Currently I am working here at Bushwakker and am making preparations for my third year of school to start. Most of the material I use is scrap metal I've gathered from various locations or from my dad’s garage. Sometimes I'll have an idea of what I want to create but other times I just sort of lay the pieces out in front of me and let them decide. Enjoy her works all this month!

Negotiations continue between craft brewers and stadium partners By Brian Rodgers, CBC News   June 30, 2017 The Saskatchewan Craft Brewers Association is still optimistic local beers will be an offering in the stadium sometime this season. With the Saskatchewan Roughriders set to officially open their new stadium on Saturday, fans hoping for a chance to sip on locally brewed beer inside the new digs will have to wait. Since March, there's been talk that the Saskatchewan Craft Brewers Association was working on a deal to find craft beer brewers a spot inside the new Mosaic Stadium. Currently, stadium founding partner Molson Coors has exclusive rights to sell beer at events. There was renewed optimism among craft brewers and fans in May as the stadium was being prepared for its second test event, the Regina Rocks concert. At the time, the SCBA released a statement saying they hoped to be "in full force" offering local beers at the event. Regina Exhibition Association Limited (REAL), which operates Evraz Place — home to the new stadium — said craft beer options were indeed being explored. But since then, both Regina Rocks and the Riders first preseason game have come and gone, and still no sign of Saskatchewan suds inside the stadium. Grant Frew, the SCBA's director-at-large, confirmed that will be the case again on Saturday, when the Riders officially christen the new stadium in a match against the Winnipeg Blue Bombers. Negotiations Continue Frew said the SCBA's goal now is to work out a deal to get craft vendors inside the stadium sometime this season. "I think it's a wonderful opportunity to be on that stage and share the wonderful products that are being produced by Saskatchewan breweries with people all across the nation," he said. "We want to continue to work in good faith with REAL and Evraz in order to come to a deal that's amicable for everyone involved. Frew wouldn't go into detail about the negotiations, or what exactly craft brewers are hoping for inside the stadium. But he said the brewers association recently submitted a proposal to the Roughriders et al., who then sent a counter-proposal. That offer still needs to be discussed by the SCBA, Frew said. CBC reached out to the Saskatchewan Roughriders for comment. The team declined, but did provide a statement, saying "expect there to be a further update soon." "The City of Regina, Evraz Place (REAL), and Saskatchewan Roughriders are still in discussions with the Saskatchewan Craft Brewers Association as to options for craft beer in Mosaic Stadium and during Rider games," the statement said. Beer Boycott Logan Smith has decided he's going to boycott beer altogether during home games this season. The six-time Roughriders season ticket holder said he was looking forward to having a wider variety of beer options when he started hearing rumblings that local craft beer would find a home in the stadium. "As a season ticket holder for many years, we've been through some good and some bad, but we always support the team. The community as a whole supports the team," Smith said. "I was pretty disappointed that a team that's receiving all of that support basically negotiated the local community right out of the ability to sell beer in the stadium." Smith admitted he could always be counted on to drink a couple of Molson products while attending games at the old stadium. So how hard will it be to abstain at games this season? "I think I'll be fine with it," he said. "If it makes an impact, which I'm definitely hoping it does ... then it’s well worth it. Nothing wrong with bringing in a couple of cans of cola, a couple of bottles of water into the stadium with me, and then have a beer when I get home and we're talking about the game with the family." 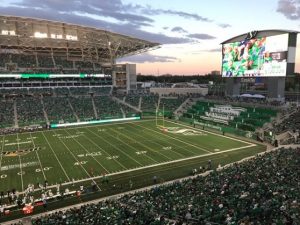 For the time being, Molson Coors has the exclusive rights to beer sales in Mosaic Stadium. (Glenn Reid/CBC) Editor’s Note: Without local craft beer, Mosaic may be the only major sports venue in North America that serves only industrial beer. That will certainly make the new stadium and the city stand out but not in the way that would make us very proud. It will hamper efforts by Regina organizations over the years, like the Chamber of Commerce and Tourism Regina, to get rid of our reputation, which as one wag put it, as being represented by a farmer standing in a field chewing on a blade of grass and talking very slowly. Of course to be a modern farmer (or producer) in Saskatchewan one must become a very sophisticated tech-savvy businessman or businesswoman. Molson’s will claim that they offer their own craft beer but don’t be fooled. I will not only refuse to drink beer at Mosaic, I won’t go near the stadium until it joins the third millennium. Bev Robertson, Bushwakker Brewing

A group of friends who went deer hunting separated into pairs for the day. That night, one hunter returned alone, staggering under a huge buck. "Where's Harry?", asked another hunter. "He fainted a couple miles up the trail," Harry's partner answered. "You left him lying there alone and carried the deer back?" "It was a tough decision," said the hunter. "But I figured no one is going to steal Harry."