The Bushwakker is offering Smoked BBQ dishes every weekend this summer. Craft beer and BBQ pair wonderfully together! This weekend’s BBQ feature is: Smoked Back Ribs w/ Baked Beans & Potato Salad. $22.95 (Weather permitting). We apologize to those who were looking for a chance to try our BBQ’d (smoked) brisket meal last weekend and didn’t get the chance to try it. Those who fell into that category included Bushwakker founder Bev Robertson, who also showed up after we ran out of BBQ’d meat. We had cooked all our cooker could hold (four briskets) before the weekend rain started. We use a 22 in. WSM cooker, (and our fellow BBQ enthusiasts will know those letters stand for.) The brisket meal turned out to be so popular that we ran out of all the BBQ shortly after lunch on Saturday. Normally we would have cooked more as soon as we discovered how fast it was moving. Unfortunately, fire regulations and the need to deal with the smoke from the cooker means BBQ must be cooked outdoors. By the time we realized we needed more it was pouring rain and our cooks were not quite ready to cook in the rain. Regina doesn’t get that many rainy weekends so we don’t expect this to happen very often. Our guest tap is currently pouring a Smoked Amber Ale from Nokomis Craft Ales: $7.95 for a pint and $5.95 for a half pint.  Next up is a Chocolate Stout from Regina’s Pile O’ Bones Brewing. Following that we will pour a special collaboration Kellerbier involving Central City Brewers & Distillersand Black Bridge Brewing. This Bavarian Pilsner packs a hoppy punch! Our premium red wine for June is Fuzion Alta Reserve Malbec from Argentina: $7.95 for a glass and $21.95 for a half litre. The white is Oyster Bay Sauvignon Blanc from New Zealand: $8.95 for a glass and $24.95 for a half litre. Our big, malty and hop-citrusy West coast style Chico IPA is available for growler fills at the Quance Street SLGA store in Regina for the month of June. Three other new Saskatchewan hop-forward craft brewed beers are also available including two pale ales and a session IPA. Be sure to support this SLGA pilot program and help grow Saskatchewan craft beer. 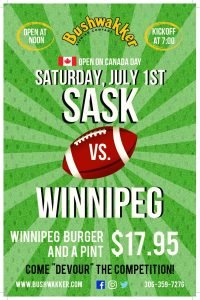 We will OPEN AT NOON on Canada Day.  Riders host the Bombers at 7:00 PM.

by Mark Snyder The Brewers Association (BA) Export Development Program (EDP) recently traveled to Vancouver to promote American craft beer at the Vancouver Craft Beer Week (VCBW) Festival—one of Canada’s largest events for craft beer. Export Development Program Manager Mark Snyder represented the Brewers Association at the festival. EDP member breweries shipped over 60 different beers and generated strong interest and awareness for U.S. craft beer. The U.S. craft beer pavilion was sponsored by the U.S. Consulate in Vancouver, and was busy throughout the two days. The primary objective of Brewers Association participation in the festival was to promote U.S. craft beer in British Columbia, and more generally the Canadian market. This was the third year the BA participated. Even though Canada is the largest market for U.S. craft beer, low awareness of U.S. brands and styles restrict growth of existing brands and limit distribution opportunities for new brands. In addition, provincial-level government laws, taxes, and distribution models benefit Canadian produced beer. By sponsoring a booth at the VCBW, the BA expanded consumer awareness in terms of quality, style, and diversity of products offered by the U.S. craft beer industry. Another objective for the BA was to assess the accessibility and continued viability of British Columbia’s market for U.S. craft beer, and determine the BA’s strategy to best support this. For many new-to-export breweries, Canada has become a logical first market. The BA focuses on developing and maintaining export program activities that sustain this growth. At VCBW, the set-up of the festival allowed for major importers of U.S. craft beer to work alongside the BA, and discuss the current market situation and potential opportunities in Canada. Given the success of the 2017 Vancouver Craft Beer Week Festival, the BA will strongly consider this event in 2018. The BA appreciates the support of EDP members with this event and look forward to continuing the promotion of American craft beer in the near future.

By Jason Foster A couple weeks ago I spent a few days in Toronto (as I shared here). It was mostly for work but I was able to get some beer time in on the side. I have had a bit of time to reflect upon the beer I tried and consider the state of the Ontario craft beer scene. There is no question the beer scene in Ontario is much bigger than out here on the prairies. From my database Ontario has 230 breweries and brewpubs with another 44 contract operations (I could be a few off as it is a moving target). During my five days in Toronto I was able to sample 45 different Ontario beers (to be clear, most were 4 oz. sample sizes and some were 1-2 oz. tasters, lest you worry about my consumption). And I stuck exclusively to Ontario beer I had not yet tried. What is my overall impression? First, the range of styles and approaches is almost dizzying. With that many breweries there was no shortage of different styles to try. I tasted six different versions of a New England Pale Ale/IPA and had a handful of sour beer of various shapes and sizes. I tried everything from a classic pilsner to an Oud Bruin. Plus a couple casks along the way. Second there is some great beer being made in Ontario. Some of my highlights included High Road Bronan IPA, Napanee Blacklist Schwarzbier, Left Field Eephus Oatmeal Brown Ale, Bar Hop Tremolo II Saison and Sawdust City There’s No Way of Knowing Saison. Plus there were a dozen or so more that I found quite enjoyable. I also had a couple great casks at The Queen and Beaver Pub. And while I am talking about great things, I need to give a shout out to Bar Hop and Bar Hop Brewco (sister places a few blocks apart – for the record I preferred the newer Brewco location) as well as C’est What and the previously discussed Hair of the Dog Pub for offering up a fantastic craft beer experience for a traveler. Third, like all places not every brewery is created equal. I tasted a lot of so-called Meh! beer, including a couple that were clearly infected. I won’t name those breweries but the experience hardened in me the sense that as a beer scene grows a division of quality develops. Twenty years ago you had to make good beer to survive. It might be safe, but it had to be well-made. Today, the measures of success are different. There is a good lesson in that. Local beer fans who are versed in the beer scene know which breweries and beer to avoid. As an outsider I didn’t know so tried a wide range of breweries, 34 different ones in total. As a result I think I experienced a more representative range of what is on offer in the province than if one of my respected Ontario colleagues offered up suggestions for me. In short there is a good selection of world-class beer on offer. But there is also some sub-standard beer that shouldn’t be sold and a whole bunch in the middle that are nice beer but not particularly noteworthy. Toronto may be the centre of the universe but when it comes to beer it seems like their scene, while more mature than out here, offers up the same range of the great, the good and the ugly. 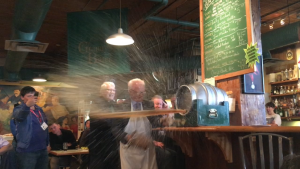