The Bushwakker is offering Smoked BBQ dishes every weekend this summer. Craft beer and BBQ pair wonderfully together! This weekend’s BBQ feature is: Smoked Brisket w/ Jalapeno Mac n’ Cheese & Housemade Corn Bread. $18.95 Our guest tap is currently pouring a Smoked Amber from Nokomis Craft Ales: $7.95 for a pint and $5.95 for a half pint.  Next up is a Chocolate Stout from Regina’s Pile O’ Bones Brewing. Following that we will pour a special collaboration Kellerbier involving Central City Brewers & Distillers and Black Bridge Brewing. This Bavarian Pilsner packs a hoppy punch! Our premium red wine for June is Fuzion Alta Reserve Malbec from Argentina: $7.95 for a glass and $21.95 for a half litre. The white is Oyster Bay Sauvignon Blanc from New Zealand: $8.95 for a glass and $24.95 for a half litre. Our big, malty and hop citrusy West-coast style Chico IPA is available for growler fills at the Quance Street SLGA store in Regina for the month of June. Three other new Saskatchewan hop-forward craft brewed beers are also available including two pale ales and a session IPA. Be sure to support this SLGA pilot program and help grow Saskatchewan craft beer. “TIE ONE ON” Father’s Day Growler Gift Boxes are now available. Includes your choice of a glass or stainless steel Bushwakker growler, two Bushwakker pint glasses, a growler fill gift certificate and a brand new swanky tie all presented in a handsome gift box. $40 and $65 each. Limited quantities available. 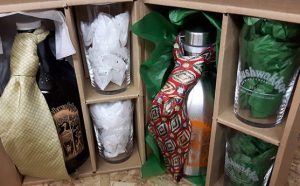 By Jason Foster of OnBeer.org Earlier this month it came out that beer mega-conglomerate AB-Inbev (more accurately their IT investment arm) has bought into beer rating website Ratebeer.com. No details on dollar amounts or what percentage of the company it now owns were released. And the deal apparently went down last December and Ratebeer’s owner only came clean last week. Initial reaction seems to be ranging from yawns to shouted declarations of “sell-out”. The reality is none of us know what this means because this is the first of its kind. Its significance lies in that the corporate boys, who have long been scooping up breweries to add to their portfolio, now seem to be looking at some of the ancillary aspects of the craft beer industry. Will suddenly ratings of AB-Inbev beer go up? Will criticisms of the big boys by raters be censored? No. AB-Inbev isn’t that stupid. They know sites like Ratebeer live on their reputation for creating a space for honest assessment. They want a return on their investment, not a shallow faux-approval of their products. That said, I think we should expect changes. More ads? Definitely. A slightly more corporate feel to the site? Likely. Subtle ways of promoting AB-Inbev products? Not out of the question. I don’t really participate in ratebeer, beeradvocate or those kind of sites, although I do go to them from time to time for research. I find ratebeer’s city places ratings useful when traveling, for example. This isn’t the most earth-shattering news on the planet, but I think it is worth noting because anytime the big boys delve into a new area, we should all pay attention because we should know it is just the beginning. This won’t be the last website investment we see from the big boys. Mark my words.

A message from Sam Calagione on current RateBeer changes

Dogfish Head has been part of the RateBeer.com network for quite some time. In fact, we’re fans of almost all websites, magazines, newsletters and blogs that help educate the public and inspire the consumption of great beer; publications that are passionate about sharing the love for our vibrant craft brewing renaissance that is now gaining traction around the globe. For many years, RateBeer, along with entities like BeerAdvocate, All About Beer, Draft, Celebrator, Ale Street, Brewing News and many more have championed this burgeoning and blossoming craft beer community in ways that are consistent with journalistic integrity. We were troubled by the announcement last week that ZX Ventures, which is fully owned by the global conglomerate Anheuser-Busch InBev, has purchased a portion of RateBeer. We believe this is a direct violation of the Society of Professional Journalists (SPJ) Code of Ethics and a blatant conflict of interest. The SPJ’s Code of Ethics includes a section called “Act Independently” and includes the following guidelines: • - Avoid conflicts of interest, real or perceived. Disclose unavoidable conflicts. • - Refuse gifts, favors, fees, free travel and special treatment, and avoid political and other outside activities that may compromise integrity or impartiality, or may           damage credibility. • - Be wary of sources offering information for favors or money; do not pay for access to news. Identify content provided by outside sources, whether paid or not. • - Deny favored treatment to advertisers, donors or any other special interests, and resist internal and external pressure to influence coverage. • - Distinguish news from advertising and shun hybrids that blur the lines between the two. Prominently label sponsored content. It is our strong opinion that ABI’s ownership of RateBeer, and other properties positioned to cover the craft brewing community like October and thebeernecessities.com is in direct conflict with multiple guidelines listed above. In the past, as executive editor of Pallet, a print magazine project that celebrated global craft beer culture, neither I nor Dogfish Head held any stake in the publication. As a company, Dogfish Head continually shows support for various craft beer publications through paid advertising campaigns. To that end, we have respectfully asked Anheuser-Busch InBev and RateBeer to remove all Dogfish Head beer reviews and mentions on the RateBeer website immediately. It just doesn’t seem right for a brewer of any kind to be in a position to potentially manipulate what consumers are hearing and saying about beers, how they are rated and which ones are receiving extra publicity on what might appear to be a legitimate, 100 percent user-generated platform. It is our opinion that this initiative and others are ethically dubious and that the lack of transparency is troubling. To our fellow independently-owned brewers, we encourage you to join us in this effort to ensure consumers continue to get the best and most accurate information about their beers. For everyone else, we encourage you to shift the sharing of your beer opinions and reviews to another platform that remains loyal to the principles of journalistic integrity. America’s Independence Day is just around the corner. Support the indie craft brewing movement! Cheers, Sam 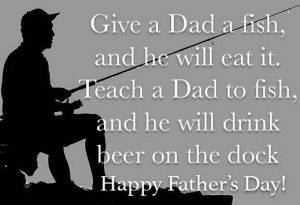 Here in Kentucky, you don't see too many people hang-gliding. Bubba decided to save up and get a hang-glider. He takes it to the highest mountain, and after struggling to the top, he gets ready to take flight. He takes off running and reaches the edge---- into the wind he goes! Meanwhile, Maw and Paw Hicks were sittin' on the porch swing talkin’ bout the good ol’ days when maw spots the biggest bird she ever seen! "Look at the size of that bird, Paw!" she exclaims. Paw raises up," Git my gun, Maw." She runs into the house, brings out his pump shotgun. He takes careful aim. BANG...BANG.....BANG.....BANG! The monster size bird continues to sail silently over the tree tops. "I think ya missed him, Paw," she says. "Yeah," he replies, "but at least he let go of Bubba!"