The Bushwakker is offering traditional smoked BBQ dishes every weekend. Craft beer and BBQ work wonderfully together. This weekend’s BBQ feature is: Smoked Carolina-Style Pulled Pork w/ Housemade Bun, Coleslaw & Choice of Side. $15.95. Our guest tap is currently pouring an American Strong Ale from Black Bridge Brewing: $7.95 for a pint and $5.95 for a half pint.  Following that, James Brown Ale from Regina’s Malty National Brewing shall flow and then a Smoked Amber Ale from Nokomis Craft Ales. Our premium red wine for June is Fuzion Alta Reserve Malbec from Argentina: $7.95 for a glass and $21.95 for a half litre. The white is Oyster Bay Sauvignon Blanc from New Zealand: $8.95 for a glass and $24.95 for a half litre. “TIE ONE ON” Father’s Day Growler Gift Boxes are now available. Includes your choice of a glass or stainless steel Bushwakker growler, two Bushwakker pint glasses, a growler fill gift certificate and a brand new swanky tie all presented in a handsome gift box. $40 and $65 each. Limited quantities available. Our big, malty and hop citrusy West-coast style Chico IPA is available for growler fills at the Quance Street SLGA store in Regina for the month of June. Three other new Saskatchewan hop-forward craft brewed beers are also available including two pale ales and a session IPA. Be sure to support this SLGA pilot program and help grow Saskatchewan craft beer. The Bushwakker was at the Irish Pavilion at Mosaic last weekend. We received great feedback on our food items as well as our commemorative Lumsden Honey Irish Red Ale. We now offer this beer in the brewpub while quantities last. Congratulations to Carol Olson who was the winner of our “Beer Hunters” prize package. The Bushwakker Local Arts Wall for the month of June features the works of Gerry Reucker. Gerry is a self-taught local artist who has been working in mixed media sculpture and furniture for the past 25 years. His work has exhibited both in Canada and abroad; most notably Jamaica, where he showed extensively, including the 2008 Jamaican Biennale. ‘I have in the past few years begun exploring the use of more raw and organic materials: old wooden boxes, pieces and fragments of old furniture, tacky ornate picture frames and various other disused and discarded objects. In my furniture and sculpture I am examining and challenging the limits of what is considered junk: objects that have been discarded and cast off, but that in my eyes have not lost their intrinsic aesthetic beauty. My work is raw and rough by conventional standards, and it indulges in excess, while at the same time attempting to achieve a certain level of weird elegance’. 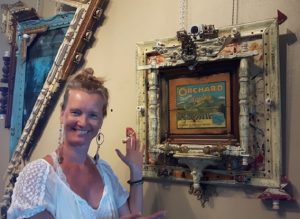 Much thanks to Gina Brown for helping out her partner, Gerry Ruecker, and hanging his very “organic” works on our Local Arts Wall this month!

By: Jason Notte  The beer giant also is scooping up craft brewers and dominating the homebrew market. I recently received a message from a longtime reader in Colorado: Any truth to the rumor regarding ABI buying every pound of South African hops? That’s not a far-fetched question. As The Wall Street Journal’s Tripp Mickle wrote last year, Anheuser-Busch InBev’s BUD, +0.11%  $108 billion takeover of SABMiller included the latter’s considerable hop holdings in South Africa, SAB Hop Farms. South Africa produced 1.81 million pounds of hops last year, more than the U.S. when excluding Oregon, Washington and Idaho. And it’s all gone to Anheuser-Busch InBev (ABI). Shortly after that reader’s message arrived on Twitter, I received an e-mail from Paul Reiter, co-owner of Great Notion Brewing in Portland, Ore., containing a discouraging message from one of his suppliers. Greg Crum, a U.S.-based brewer, consultant and hop vendor through Fort Collins, Colo.-based ZA Hops, informed Reiter that he wouldn’t be able to give him any hops from this year’s harvest. ABI “refuse[s] to let U.S. craft brewers buy any [calendar year] 2017 hops, believing this will afford them a competitive advantage in an increasingly competitive marketplace,” Crum wrote. Closed ecosystem Crum didn’t respond to a request for further information, and Anheuser-Busch InBev has offered some insight into why it’s making this move. At a workshop in George, South Africa, earlier this month — as reported by African business publication BizCommunity — ABI noted that it wants to increase South African hop production to more than 2.2 million pounds grown on 1,235 acres. By bringing SAB Hop Farms hops into the fold, Anheuser-Busch InBev has enclosed its ecosystem and gained more ground on competitors. Do you like the South African hops you’re tasting in Wicked Weed, Goose Island or Elysian beers? You can get them exclusively at Norther Brewer for $9.99 a pound. Like those obscure-hop IPAs, but don’t want to walk to a store you don’t know for them? Let an Anheuser-Busch InBev distributor take them to a national grocery store chain right near your suburban home. Live in the city? Then try those proprietary hops at a Goose Island or 10 Barrel taproom near you. Willy Buholzer, ABI’s global hops procurement director, said this year’s recent harvest season in South Africa produced a low yield. More than 90% of this year’s South African hops will go into local brands Castle Lager and Castle Lite. He also says that much of the rest will go to South African craft breweries, leaving just 5% for ABI brewers throughout the world. Out of reach  Reiter, of Great Notion Brewing, was aiming to be one of the first breweries in the Pacific Northwest to offer beer with South African hops — “to be on the forefront of what’s new, cool, experimental,” he said. The greater issue, which beer writer and historian Stan Hieronymus touches on in his 2012 book, “For the Love of Hops,” is that Anheuser-Busch InBev has never been shy about controlling the means of production. Before Anheuser-Busch’s merger with InBev in 2008, it had no problem buying up the majority of a hop farm’s acreage in Oregon. In fact, Anheuser-Busch alone once accounted for more than 75% of all of Oregon’s hop acreage. Anheuser-Busch InBev has given craft beer brewers and fans quite a bit to be nervous about. Very recently, Wicked Weed Brewing in Asheville, N.C., announced that it was selling to ABI and joining its craft and import group, The High End. It was the 10th U.S. brewery to do so since 2011 and just Anheuser-Busch InBev’s latest foray into previously unexplored portions of the industry. Last year, ABI launched its venture-capital firm ZX Ventures and almost immediately scooped up Roseville, Minn.-based Northern Brewer, the biggest homebrew-supply chain in the country. The American Homebrewers Association in Boulder, Colorado, notes that homebrewing included 1.2 million participants, created more than 11,000 jobs and drew more than $1 billion in spending and $700 million in revenue in 2015. It’s hugely influential in determining who the nation’s new brewing talent will be and what styles they’ll help popularize. The critic’s view is that this is an incredibly anti-competitive stance aimed directly at regional and craft brewers. The realist view is that hauling in those South African hops strengthens Anheuser-Busch InBev in a way that scores of new Lagunitas taprooms will never bolster parent company Heineken HEINY, -0.79%  or that new Ballast Point breweries will never prop up Constellation Brands STZ, +0.44% The more competitors that enter Anheuser-Busch InBev’s space, the more the big brewer will remind them that the world is its space. And that world is full of willing sellers. 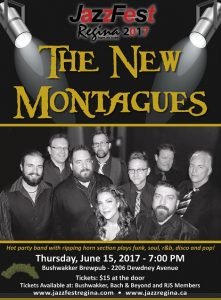 Tickets now available to our biggest jazz show of the year!