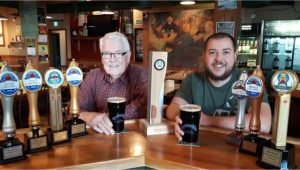 Congratulations to Bushwakker head brewer, Michael Gaetz, on his silver medal win at the 2017 Canadian Brewing Awards!  Michael’s Pickard’s Oatmeal Cream Stout is a particularly significant win for the Bushwakker family owned and operated business. The beer’s brand name acknowledges Bushwakker co-founder Elaine Robertson’s maiden name, Pickard.  Bushwakker company president, Bev Robertson, also won his first national award with a dark ale, Palliser Porter, many years ago. Michael now joins the ranks of his grandfather and uncle (Scott Robertson; Bushwakker’s first head brewer) as a nationally recognized award-winning brewer! Our guest tap is currently pouring a Belgian Dubbel from Nokomis Craft Ales: $7.95 for a pint and $5.95 for a half pint.  Next we have an American Strong Ale from Black Bridge Brewing. Following that, James Brown Ale from Regina’s Malty National Brewing shall flow. Our premium red wine for June is Fuzion Alta Reserve Malbec from Argentina: $7.95 for a glass and $21.95 for a half litre. The white is Oyster Bay Sauvignon Blanc from New Zealand: $8.95 for a glass and $24.95 for a half litre. Our big, malty and hop citrusy West-coast-style Chico IPA is available for growler fills at the Quance Street SLGA store in Regina for the month of June. Three other new Saskatchewan brewed beers are also available. Be sure to support this SLGA pilot program and help grow Saskatchewan craft beer.

By Jason Foster    Over the weekend the results of the 2017 Canadian Brewing Awards were announced (see the full winners’ list here.) I can honestly say they were full of surprises. Lots of new names on the list and a fascinating equality between regions (to a degree). There were more than a dozen breweries where I either barely knew or even had to look up because I had never heard of them. The list overall makes me feel really positive about both the state of the Canadian beer scene – we are maturing and the diversity of winners shows it – and the evolution of the Canadian Beer Awards. A few years ago I was fairly critical of the CBAs. To their credit they made a number of changes to their process and have worked hard to show that they want to be as objective as possible. And the results show it. So, a few quick stats. There were 55 styles judges, with 163 medals awarded (in two styles they only awarded two medals). One of my ongoing frustrations is that they do not release the number of entries nor how many entries from each region. It can make it hard to tell who entered and who didn’t. Ontario won the most medals at 51. B.C. was right behind at 49 – basically a tie. Quebec scooped up 35 and Atlantic Canada 11. The prairies (which, in my books includes Yukon and NWT) picked up 17, a steady growth from the past two years (11 and 13, respectively). The prairie list was an interesting mix of longstanding breweries and newcomers. Twelve breweries in total won awards. As usual Great Western Brewing won the most, this time with three medals including one gold. Other multiple winners included Big Rock, Brewsters and Troubled Monk. Here is the full list of prairies winners (in no particular order): • Big Rock: Gold, Euro-style lager; and Silver, North American Wheat • Brewsters: Gold, North American Wheat; and Silver, European-Style lager • Village: Bronze, Tripel • Winterlong: Silver, French and Belgian Ale • Common Crown: Silver, Scotch Ale • Troubled Monk: Bronze, Sweet Stout; and Bronze, North American Blonde/Golden Ale • Bushwakker: Silver, Oatmeal Stout • Black Bridge: Gold, Imperial Stout • Great Western: Gold and Silver, North American Lager;  and Silver, Light Lager • Torque: Bronze, North American Amber Ale • Blindman: Bronze, Session Ale • Ribstone Creek: Gold, Session Ale In general the number of new breweries across Canada winning medals has me feeling bullish about the state of craft beer in Canada. Yet, we would be too quick to dismiss the more veteran breweries as well, as they continue to show their abilities. I note for example that 7 of the prairies’ 17 medals are from three of the oldest in the region – Big Rock, Brewsters and Great Western. Some of you may dismiss those winners as most are clustered in the so-called “mainstream” categories – North American Lager and Wheat, European Style Lager and such. My response? You try making one of those styles. Sure, it may not be your go-to beer, but it is important to respect that these are not easy styles to make consistently. You have nowhere to hide. The slightest flaw rings through. In Great Western’s case in particular, where they consistently win in those categories almost every year, it speaks volumes about their ability to dial in and reproduce. So, today I say a hearty congratulations to all the prairie winners and if you need a place to get rid of some of that extra award-winning beer, you know how to contact me! 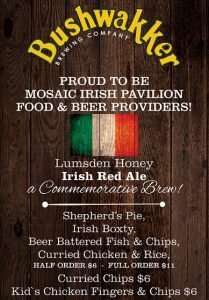 A man went into one to get a shave, and noticing that the manicurist was really beautiful, decided to have a manicure at the same time.  After he watched her work for a while, he got up his nerve and finally said, "How about going out with me tonight or some night soon?' She said, "No, I'm married" He asked, "Can't you just tell your husband you're going to visit a sick girl friend?" "Why don't you tell him yourself" she replied, "He's shaving you!"