Our guest tap is currently pouring Wheat Burst American-style wheat beer from Black Bridge Brewery in Swift Current: $7.95 for a pint and $5.95 for a half pint. Next up we have a Belgian Dubbel from Nokomis Craft Ales followed by an American Strong Ale from Black Bridge Brewery. Our premium red wine for May is Mezzomondo Negroamaro from Italy: $6.50 for a glass and $16.95 for a half litre. The white is Caliterra Reserva Sauvignon Blanc from Chile: $7.50 for a glass and $19.95 for a half litre. Our southern German-style Stubblejumper Pils is available for growler fills at the Quance Street SLGA store in Regina for the month of May. Three other new Saskatchewan brewed beers are also available. Be sure to support this SLGA pilot program and help grow Saskatchewan craft beer. The Bushwakker has recently been recognized as being one of the Top 35 Jazz Venues in Canada. Nice to see our weekly Monday Night Jazz & Blues is being recognized on the national stage. Read the article here http://www.clickitticket.com/best-jazz-clubs-in-canada/ Congratulations to Bushwakker floor manager, Cheryl Tovey. She has won an unprecedented eight awards for Regina’s Best Pub Server in the Prairie Dog annual “Best of Food” Regina reader poll awards. Bushwakker also took home the Best Nachos and Best Local Fries award as well as the Best Pub to Argue about Politics award! Our 2nd annual Poet Laureate’s Poetry & a Pint Presentation took place on Saturday, May 20. Brenda Schmidt from Creighton, Saskatchewan is our province’s 7th serving poet laureate and she just so happens to be an enthusiastic cheesecake fan! We created one of our most challenging cheesecakes in her honour and called it The Chocolate Muse. This decadent dessert featured a coconut cream pie which was baked INSIDE of a chocolate cheesecake. Hats off to Bushwakker Pastry Chef, Tim Wooley, for rising to the challenge and creating something outside of his comfort zone. The reviews were fantastic and the cheesecake sold out very quickly!  Brenda liked The Chocolate Muse cheesecake so much that she wrote an ode to said cheesecake and is as follows: Ode to the Chocolate Muse Cheesecake  Dear cheesecake, when you were mere ingredients gathered on a counter before a bowl I dreamt of the most expedient way to experience your creamy soul trusting all along in its perfection for the hands that created you are driven by an image tucked in the big cookbook between the ears, the delectation passed down by a mother or in a vision any saint would die for. And now look at us all gathered here in your honour. I drove through long weekend traffic, a good eight hours straight, thought I was a goner more than once, once again misunderstood those time-limited parking signs. Who knows, my car might very well be gone when I leave but just knowing you exist tows me to a pound of glory. For you, I composed this in a springform, plan to roundly give you a slice of some of the most artsy writers I know. Here’s Anne, Bruce, Carle, Dave, Nathan. All sweets on special. Keep in mind though the confusion the angry muse gave to Ralph Waldo Emerson’s brain. I’ve dined on such politics lately. The cheesy have taken over the seats of power and Spicer hides in the bushes spewing nonsense and here I am saying yippee! Cheesecake! If you could talk you’d holler what? The fork! Do you think you’re doing?   And a Limmerick  from Nathan Mader was also presented: I just met a woman outside named Maria who locked herself out of her KIA. She shed a few tears  then brightened with cheer and came in for a Wakker Quesadilla.

May 29: Monday Night Jazz & Blues. The Jazz Band-Its. The largest band to ever grace our stage plays big band, jazz and swing! 8:00 PM. May 31: Wednesday Night Folk. Ava Wild. Folk roots and acoustic pop, spiced up with embellishments of jazz and old-country. 8:00 PM. June 1: 15th Annual Soul Sisters YWCA fundraiser. Our own, Cheryl Tovey, will take the reigns of this popular fundraising event for various YWCA women’s programs. Great live entertainment featuring The Red Wagon Gypsies and Regan Sanderson. Browse the massive silent auction too. Your $30 ticket gets you an award-winning Bushwakker burger with some award-winning fries as well as Caesar salad and a 12 ounce serving of any regular Bushwakker beer. Tickets are available at The Bushwakker, the YWCA and The Room Hair Design. 6:00 PM. 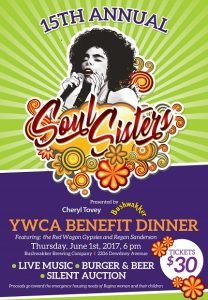 By Julia Herz The Brewers Association (BA) has updated its Advertising and Marketing Code and also formed a new Diversity Committee, as announced at the 2017 Craft Brewers Conference & Brew Expo America®. These recent steps are tightly tied to the BA’s purpose: to promote and protect American craft brewers, their beers, and the community of brewing enthusiasts. Diversity Committee The new Diversity Committee met for the first time at the 2017 Craft Brewers Conference. Led by Scott Metzger, founder of Freetail Brewing and a member of the BA board of directors, this new committee will use 2017 primarily for gathering information. It will also engage in a variety of tasks, potentially including: • Identifying issues related to maximizing the diversity and inclusiveness of Brewers Association membership and of the industry as a whole including beer lovers. • Enriching the Association and its ability to serve members, along with the craft brewing industry, through integration of multiple perspectives and experiences. • Conducting outreach and participating in conversations with like-minded groups to share best practices. • Monitoring industry discussions among media, members, and beer lovers surrounding topics of diversity with regard to race and gender. Updated Advertising and Marketing Code Language has been added to address beer marketing with sexually explicit, lewd, or demeaning brand names, language, text, graphics, photos, video, or other images. An Advertising Complaint Review Panel will address issues as they arise should a voting member brewery lodge a complaint tied to the code. The updated code will apply to winners of the BA’s competitions, the Great American Beer Festival (GABF) and World Beer Cup. Beginning in 2017, brand names that are determined to not meet the Marketing and Advertising Code, and that win a medal or award, will not be permitted to use the GABF and/or World Beer Cup intellectual properties (trademarked names and logos) when promoting the winning beers. Additionally, the brand name will not be announced on stage during the award ceremony or promoted in competition materials, such as the winners’ list. The brewery producer and style of the beer will be announced/listed, but not the beer name itself. This addition is not in response to one specific brand or brewery. Additionally, it applies only to new entries of our competitions going forward. The Brewers Association believes in free speech, innovation, and creativity. As businesses, brewers can and should name and market beers in the manner they desire. However, the Brewers Association also believes that beer marketing should represent the values, ideals, and integrity of a diverse culture. We will not be a platform to promote or celebrate any brands that do not meet Advertising and Marketing Code. Why Now? Many media and member conversations prompted the above steps. The impetus is not one specific thing, but more so a compilation. Especially over the last few years, we have been asked about diversity in beer from a growing number of brewery members and beer community stakeholders including beer lovers and media. As well, an increasing number of diversity-specific media stories have focused on the topic. The BA is taking meaningful, purposeful action on a topic that has permeated many industries in our culture, including beer. Many member-based associations have codes and initiatives in place to address diversity. In November, when writing about this topic in both The New Brewer and in a BrewersAssociation.org post, I admitted to the complexity of speaking about diversity, and that we as an industry don’t always get it right. It’s important to point out that these new steps also stem from recognizing the conversation happening in our culture regarding diversity. Inclusion is an issue with many sides and viewpoints. Some may feel we have not gone far enough, while others many feel we have gone too far. Regardless of complexity, as Scott Metzger shared with BA members during CBC, an increased Association focus on better equipping BA member breweries to market and sell beer to a diverse group of adults, as well as increase the pool of talent for hire, is the right thing to do. It has been said that diversity is not a problem to be solved, but a value to be lived. This mantra is something to keep top of mind as we tread into these new waters. As a collective group, craft brewers are amazing community citizens, constantly using their craft beers as a cause for other causes. Craft brewers donated an estimated $71 million in cash to charitable causes in 2014, and as of 2016, provided 129,000 full- and part-time jobs. They are fueling our economy and tax base while advancing tourism and our food culture. It’s important to point out that more than two-thirds of today’s legal drinking adults live within 10 miles of a brewery. Those 10 miles are the site of many hires for brewery jobs and many purchases, providing a varied geographic makeup of brewery employees and beer lovers. However, none of us truly knows how diverse the workforce of the U.S. craft brewing universe is because we have never surveyed this information. Along with the updated Advertising and Marketing Code and the newly formed Diversity Committee, the BA will also use 2017 to gather gender and racial/ethnicity data from brewery members who are open to sharing this information. As an organization representing tens of thousands of collective members, the BA is taking the positive step of being further informed on the makeup of the broad group of individuals who work at U.S. breweries. 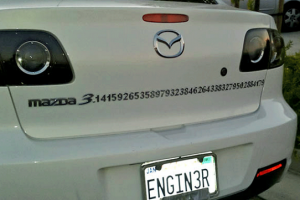 And Speaking of Pie, Check out the Pi Car!

A man and a boy entered a barber's shop together.  After the man had received a shave and a haircut, he sat the boy in the chair and said, "I'm just going to run next door to pick up a few things from the supermarket.  I'll be back in a few minutes." When the boy's hair was cut and the man still hadn't returned, the barber said, "It looks like your dad's forgotten you." "That wasn't my dad," said the boy. "He just walked up, took me by the hand and said, "Come on, we're going to get a free haircut."