Our guest tap is currently pouring a Vienna Lager from Pile O’ Bones Brewing in Regina.  $7.95 for a pint and $5.95 for a half pint. Next up we offer an unfiltered, hoppy American Style wheat ale called Wheat Burst from the Black Bridge Brewery in Swift Current and then a Belgian Dubbel from Nokomis Craft Ales.

Our southern German-style Stubblejumper Pils is available for growler fills at the Quance Street SLGA store in Regina for the month of May. Three other new Saskatchewan brewed beers are also available. Be sure to support this SLGA pilot program and help grow Saskatchewan craft beer. 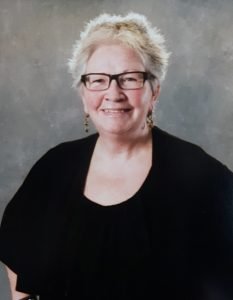 Big congratulations to Bushwakker floor manager, Cheryl Tovey who recently stood on a huge stage with some of the most respected and powerful women in southern Saskatchewan at the 2017 YWCA Women of Distinction Awards held at the Conexus Arts Centre. Thank you for your quarter century of caring for Bushwakker customers and playing an important part in the Bushwakker's success as well as enriching the Regina community through your volunteer work. You are an inspiration to many!

May 19: ANNUAL SCREAMIN’ MOSQUITO CHILI BEER RELEASE. Our hot pepper-infused blonde ale makes its annual return this weekend. We have partnered with local businessman, Tony Matharu at the India Food Centre in Regina to provide a selection of fresh spicy peppers that will showcase their unique flavours in addition to varying degrees of heat. The first pepper offering will a nice, easy introduction to the style and is one of our most popular offerings–the classic Serrano Pepper! Hurts so good! May 19, 20 & 21: MAY LONG WEEKEND KEG EVENT. What better way to celebrate the year’s first warm long weekend than with a Bushwakker keg? Receive free ice, cups, coasters and the use of a keg chiller tub with any May long weekend keg order. Four sizes of kegs are available for any gathering big or small. May 20: THE 2nd POET LAUREATE’S POETRY & A PINT PRESENTATION. The Saskatchewan Poet Laureate Program was the first provincial program of its kind in Canada. The Saskatchewan Arts Board, Saskatchewan Book Awards, and the Saskatchewan Writers’ Guild are partners in the program, which is under the patronage of the Lieutenant Governor. Enjoy a Saturday afternoon of poetry readings from some of Regina and area’s established and up-and-coming writers including: Brenda Schmidt (New Poet Laureate of Saskatchewan), Anne McDonald, Bruce Rice, Carle Steel, Dave Sealy and Nathan Mader. Perhaps enjoy a slice of our special Chocolate Muse Cheesecake. One of our most “challenging” cheesecakes ever! 3:00 PM – 4:00 PM. May 22: Closed For the Holiday. Happy Victoria Day! May 24: Wednesday Night Folk. Farmer the Band. A return engagement from BC duo multi-instrumentalists who play drums, bass, guitars, percussion & harmonica. 8:00 PM. May 29: Monday Night Jazz & Blues. The Jazz Band-Its. The largest band to ever grace our stage plays big band, jazz and swing! 8:00 PM. May 31: Wednesday Night Folk. Ava Wild. Folk roots and acoustic pop, spiced up with embellishments of jazz and old-country. 8:00 PM. June 1: 15th Annual Soul Sisters YWCA fundraiser. Our own, Cheryl Tovey, will take the reigns of this popular fundraising event for various YWCA women’s programs. Great live entertainment featuring The Red Wagon Gypsies and Regan Sanderson. Browse the massive silent auction too. Your $30 ticket gets you an award-winning Bushwakker burger with some award-winning fries as well as Caesar salad and a 12 ounce serving of any regular Bushwakker beer. Tickets are available at The Bushwakker, the YWCA and The Room Hair Design. 6:00 PM.

Amy Haneline – Indystar reporter The non-profit trade association that represents more than 3,800 U.S. breweries has taken a step to curb offensive brand names and labels. The Brewers Association announced a new initiative to advance diversity in the craft brewing community. And with that, it has amended the guidelines it offers its members when making marketing and advertising decisions. It added two lines to its code: Materials should not “contain sexually explicit, lewd or demeaning brand names, language, text, graphics, photos, video or other images that reasonable adult consumers would find inappropriate for consumer products offered to the public.” They should not “contain derogatory or demeaning text or images.” The announcement follows a surge of industry chatter and media reports, including IndyStar’s coverage of the issue in Indiana. “This has been an emerging topic,” said Julia Herz, craft beer program director at the Brewers Association. The organization has heard from many in the industry, she added. And while the Brewers Association always has been a resource in many other aspects of brewing, she is excited to add diversity to that list. “And reason No. 1 is because it is the right thing to do,” Herz said. Route 2 Brewery in Lowell in Northwest Indiana has been under fire for some of its beer names and labels that critics argue are sexist and objectifying to women. Its ESB style beer is named Leg Spreader, and the label illustrates a large-chested woman sitting with the brewery's logo between her spread legs. Another version of the label recently has emerged. Lance Rhoades of Rhoades Beverage Co., which distributes Route 2 brews, said the brewery’s new six-pack bottles of Leg Spreader ESB do not contain the illustration of the woman but the name “Leg Spreader” is still displayed on the back. IndyStar has not been able to reach Route 2 Brewery’s owner or marketing director for comment other than an email indicating that the brewery has two different labels for the beer: one for gas stations and grocery stores and another for liquor stores. Under the Brewers Associations new guidelines, beers like Leg Spreader could face higher scrutiny should they ever be entered into and win medals at the World Beer Cup or Great American Beer Festival awards. An independent review panel would look at any medal winners, and should the panel deem that the brewery is breaking the code, the brewery would still win the award but would not be allowed to use the association in any way to market that beer. Every brewery has the right to name and market the beer in the way they desire, Herz said. “Our hope is that they do it true to the values and integrity that the craft beer community should aspire to.”

A man walked in to Joe's Barber Shop for his regular haircut.  As he snips away, Joe asks "What's up?" The man proceeds to explain he's taking a vacation to Rome. "ROME?!" Joe says, "Why would you want to go there?  It's a crowded dirty city full of Italians!  You'd be crazy to go to Rome!  So how ya getting there?" "We're taking TWA," the man replies. "TWA?!" yells Joe. "They're a terrible airline.  Their planes are old, their flight attendants are ugly and they're always late! So where you staying in Rome?" The man says "We'll be at the downtown International Marriot." "That DUMP?!" says Joe. "That's the worst hotel in the city!  The rooms are small, the service is surly and slow and they are overpriced!  So whatcha doing when you get there?" The man says "We're going to go see the Vatican and hope to see the Pope." "HA! That's rich!" laughs Joe. "You and a million other people trying to see him.  He'll look the size of an ant.  Boy, good luck on THIS trip.  You're going to need it!" A month later, the man comes in for his regular haircut.  Joe says, "Well, how did that trip to Rome turn out?  Betcha TWA gave you the worst flight of your life!" "No, quite the opposite" explained the man. "Not only were we on time in one of their brand new planes, but it was full and they bumped us up to first class.  The food and wine were wonderful, and I had a beautiful 28 year old flight attendant who waited on me hand and foot!" "Hmmm," Joe says, "Well, I bet the hotel was just like I described." "No, quite the opposite!  They'd just finished a $25 million remodeling. It's the finest hotel in Rome, now. They were overbooked, so they apologized and gave us the Presidential suite for no extra charge!" "Well," Joe mumbles, "I KNOW you didn't get to see the Pope!" "Actually, we were quite lucky.  As we toured the Vatican, a Swiss guard tapped me on the shoulder and explained the Pope likes to personally meet some of the visitors, and if I'd be so kind as to step into this private room and wait, the Pope would personally greet me.  Sure enough, after 5 minutes the Pope walked through the door and shook my hand.  I knelt down as he spoke a few words to me." Impressed, Joe asks, "Tell me, please! What'd he say?" "Oh, not much really. Just "Where'd you get that awful haircut?" 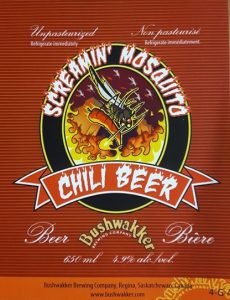 The annual May Long Weekend Release of our Screamin’ Mosquito Chili Beer kicks off with Serrano Pepper infusion.