Our guest tap is currently pouring the "Muggle-bot" Pale Ale from Regina’s Malty National Brewing. This is their beloved Magic Robot recipe with Mosaic hops taking the place of Citra: $7.95 for a pint and $5.95 for a half pint. Next up we have a Vienna Lager from Pile O’ Bones Brewing in Regina. Our premium red wine for May is Mezzomondo Negroamaro from Italy: $6.50 for a glass and $16.95 for a half litre. The white is Caliterra Reserva Sauvignon Blanc from Chile: $7.50 for a glass and $19.95 for a half litre. Our southern German-style Stubblejumper Pils is available for growler fills at the Quance Street SLGA store in Regina for the month of May. Three other new Saskatchewan brewed beers are also available. Be sure to support this SLGA pilot program and help grow Saskatchewan craft beer. New Hours of Operation. Monday to Thursday hours are now 11:00 AM to midnight and Friday and Saturday hours are 11:00 AM to 1:00 AM. Sunday hours remain unchanged at 12:00 PM to 9:00 PM.

Bushwakker general manager, Kelly Monette, was all smiles as she presents William Shatner with a bottle of Bushwakker brewed Tartan Kiss maple oaked stout last weekend. This limited edition beer was created to commemorate Shatner himself.

May 14: Mother’s Day Feature. Six ounce Beef Tenderloin with Crimini Mushroom Demi, Veggies and Potato. $19.95 May 15: Monday Night Jazz & Blues. Call Me Mildy. Blues/rock, slide & harmonica blues peppered with reggae-laden melodies. 8:00 PM. May 17: Wednesday Night Folk. The Accomplice. Innovative one-man band delivers Grammy recognizable rock songs. 8:00 PM. May 18: Health Science Pub. Climate Change & Human Health: Bugs, Floods & Social Inequality.  This month's lecture will be presented by Amber Fletcher, Sociology and Social Studies, University of Regina and Mel Hart, Biology, University of Regina. Climate change is real and its impacts are beginning to be felt. Some of those impacts will directly affect human health. Diseases previously contained to specific locations such as tropical rain forests will spread into new environments with some consequences that can be predicted and some that likely can not. The frequency and location of "natural disasters" like floods, drought and wild fire will change. Protecting human health in the face of these changes is a complex and multifaceted task. It is made more complex by the fact that these events will impact different social groups in different ways. The two speakers will explore the science and social science of both what challenges climate change poses for human health and how we might think about society's response. 7:00 PM. May 19: ANNUAL SCREAMIN’ MOSQUITO CHILI BEER RELEASE. Our hot pepper-infused blonde ale makes its annual return this weekend. We have partnered with local businessman, Tony Matharu at the India Food Centre in Regina to provide a selection of fresh spicy peppers that will showcase their unique flavours in addition to varying degrees of heat. The first pepper offering will a nice, easy introduction to the style and is one of our most popular offerings–the classic Serrano Pepper! Hurts so good! May 19, 20 & 21: MAY LONG WEEKEND KEG EVENT. What better way to celebrate the year’s first warm long weekend than with a Bushwakker keg? Receive free ice, cups, coasters and the use of a keg chiller tub with any May long weekend keg order. Four sizes of kegs are available for any gathering big or small. May 20: THE 2nd POET LAUREATE’S POETRY & A PINT PRESENTATION. The Saskatchewan Poet Laureate Program was the first provincial program of its kind in Canada. The Saskatchewan Arts Board, Saskatchewan Book Awards, and the Saskatchewan Writers’ Guild are partners in the program, which is under the patronage of the Lieutenant Governor. Enjoy a Saturday afternoon of poetry readings from some of Regina and area’s established and up-and-coming writers including: Brenda Schmidt (New Poet Laureate of Saskatchewan), Anne McDonald, Bruce Rice, Carle Steel, Dave Sealy and Nathan Mader. Perhaps enjoy a slice of our special Chocolate Muse Cheesecake. One of our most “challenging” cheesecakes ever! 3:00 PM – 4:00 PM. May 21: Closed For the Holiday. Happy Victoria Day!

The Bushwakker Local Arts Wall for the month of May features the vibrant works of Tracy Bjorgan. 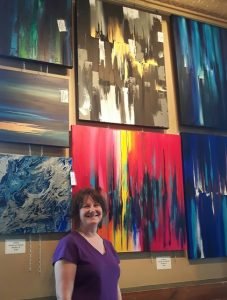 Tracy is an emerging abstract painter from Regina. Although she comes from a family of artists, Tracy was busy pursuing her passion for microbiology, being fascinated by the unseen world of microbes from an early age. In stark contrast to her science background, Tracy recently began experimenting with painting and has discovered the wonderful world of art. Her paintings are all about color and energy. She works with acrylic on canvas and likes to create bold and dramatic abstracts. Tracy finds a similarity between the mystery of what will emerge on the canvas to the mystery of discovering the invisible world around us. Be sure to stop by The Bushwakker this month and view Tracy's talents! Facebook: https://www.facebook.com/Abstract-Acrylic-Paintings-1708889...   Instagram: tracybjorgan.ca   www.tracybjorgan.ca 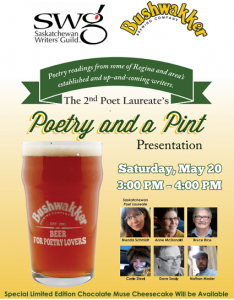 A young boy enters a barber shop and the barber whispers to his customer, "This is the dumbest kid in the world.  Watch while I prove it to you." The barber puts a dollar bill in one hand and two quarters  in the other,  then calls the boy over and asks, "Which do you want, son?"  The boy takes the quarters and leaves. "What did I tell you?" said the barber. "That kid never learns!"  Later, when the customer leaves, he sees the same young boy coming out of the ice cream store. "Hey, son!  May I ask you a question?  Why did you take the quarters instead of the dollar bill?" The boy licked his cone and replied, "Because the day I take the dollar, the game's over!"