Our guest tap is currently pouring the “Blame it on the Grain” Vanilla Stout from Regina’s Malty National Brewing; $7.95 for a pint and $5.95 for a half pint. Other upcoming guest brewery beers include the Black Bridge Brewing Dry-Hopped Saison as well as their very special Saskatchewan Craft Brewers Association collaboration brew called Multigrain Pale Ale. A bright and fresh hop-forward ale made with oats, barely, wheat and rye. Saskatchewan craft brewing history was made the day this beer was brewed! Our wine features for April are from Australia. The red is Hardy’s The Riddle Cabernet Merlot and the white is Banrock Station Unwooded Chardonnay. Both are $6.95 for a glass and $18.95 for a half litre. The Bushwakker has been nominated in 19 categories in the 2017 Prairie Dog “Best of Food” Regina reader’s poll. Please visit  http://prairedogmag.secondstreetapp.com/l/Best-of-Food-Regina-2017/Home and cast your vote. Our nominated categories for Best in Regina include; salads, soups, local fries, burgers, veggie burgers, fish & chips, desserts, gourmet pizzas, beer menu, nachos, wings as well as best place to argue about politics, best lunch restaurant, best restaurant for a party, best scene, best downtown/central pub, best chef (Mike Monette), best bartender (Troy Bleich) and best pub/lounge server (Cheryl Tovey.) We thank you for your continued enthusiasm and support! Our Sodbuster Brown Ale is available for growler fills at the Quance Street SLGA store in Regina for the month of April. Three other new Saskatchewan brewed beers are also available. Be sure to support this SLGA pilot program and help grow Saskatchewan craft beer. New Hours of Operation. Monday to Thursday hours are now 11:00 AM to midnight and Friday and Saturday hours are 11:00 AM to 1:00 AM. Sunday hours remain unchanged at 12:00 PM to 9:00 PM.

Apr. 14: Good Friday. Open at noon. Apr. 16: Closed for the Holiday. Happy Easter! Apr. 17: Monday Night Jazz & Blues. Whiteboy Slim. This national award-winning blues artist will be previewing some of the material which will appear on his next CD. 8:00 PM. Apr. 17 – 22: ALES Open. One of the nation’s largest homebrewing competitions takes place at the Bushwakker all this week! Hundreds of entries from coast to coast will be evaluated. Approximately 100 volunteers work tirelessly to present this internationally recognized event.

Apr. 19: Wednesday Night Folk. Bradford. Talented guitar duo featuring Brad Papp and Mark Radford. 8:00 PM. Apr. 20: Health Science Pub. TRANSFORM THIS: Patients, the Public & the Future of Saskatchewan Health Care. Our wildly popular Science Pub Series is back for the second half of a fifth incredible season! Enjoy lectures on scientific topics of general interest in our Arizona Room (main floor banquet room) over beer and snacks. The room opens at 5:00 PM and quite often is full by 6:00 PM. Avoid disappointment and come down early for dinner and a pint before the presentation which begins at 7:00 PM. This month's lecture will be presented by Karen Eisler, Associate Dean of Nursing at U of R and Tom McIntosh, Professor of Politics and International Studies at U of R. Health care in Saskatchewan may well be at a turning point. On the service delivery front the province has gone from "Patient First" to "LEAN" to talk of 'transformational change' and recently announced the creation of a single health authority to manage the system. On the political front the government has signed an agreement with the federal government that will limit the growth in federal transfers to the province at the same time it is dealing with the challenge of a large deficit due to low resource prices. What do these changes mean for patients entering into the system?; for the health professionals who work in the system; for the citizen whose tax dollars support the system?; and for the long-stated goal of moving towards a different kind of health care system built on integrated teams, new roles for care-givers and a greater focus on prevention? The speakers will explore these questions from multiple angles to draw a picture of the system's future. Apr. 22: Annual Bushwakker Brewer’s Dinner. Tickets to our biggest dining event of the entire year are over half sold! The theme of this year’s five-course decadent dining experience will focus on local Saskatchewan ingredients. Only 100 “Savour Saskatchewan” Brewer’s Dinner tickets will be made available. Don’t miss our biggest culinary/brewing event of the year! Tickets are $85 each. 7:00 PM. For menu information please visit https://www.facebook.com/events/187322715105560/ Apr. 24: Monday Night Jazz & Blues. Brian Baggett. 12-String Chapman Stick master from Texas returns! 8:00 PM. Apr. 26: Wednesday Night Folk. The Lincoln Loggers. Lumberjack-themed band plays fun quirky covers. 8:00 PM. May 1: Monday Night Jazz & Blues. The Ministry of Groove. 1970’s jazz funk and beyond. 8:00 PM. May 3: Wednesday Night Folk. Spring Spectacular Singer/Songwriter Showcase. Neil Child leads this evening showcasing veteran and up-and-coming local musicians including; Trent Leggott, Regan Hinchcliffe, Tom Douglas, Mark Wilson, Cory Baldwin, Devon Floyd and more. 8:00 PM. May 5: First Firkin Friday. William Shatner is in town this weekend and we will be releasing a special brew in his honour. The Tartan Kiss is a rich stout which pays homage to William’s Montreal birthplace by incorporating special imported dark maple syrup from Quebec as well as Macallan single malt scotch, oak and La Gardin Chateauneuf du Pape French red wine. Only 500 bottles of this one-time offering will be produced and a few kegs will be available on tap. Mr. Shatner has visited the Bushwakker previously to enjoy our 20th anniversary brew, The Tartan Tzar. He has also tried our 25th anniversary ale, The Revenge of the Tartan Tzar and stated, “This could be the best beer and the best single malt I have ever tasted.” A firkin of The Tartan Kiss will be tapped at 5:30 to officially launch our third offering in the Tartan Series and a “very special” person has expressed interest in participating in the ceremony if time allows! Hmmmm…sorry, but we can’t tell you who!

Craft Brewing Growth Statistics for 2016 Released by the Brewers Association

Jess Baker – CraftBeer.com Small and independent craft brewers saw a six percent rise in volume and accounted for more than 12 percent market share in the beer industry in 2016, according to an annual report released by the Brewers Association (BA). The report, which also gave insight into how acquisitions are impacting the segment, is compiled by the Brewers Association (the publishers of CraftBeer.com) and led by the BA’s Chief Economist Bart Watson. Watson says it’s important to understand what the numbers inside the report mean. “The goal of this release is not to measure the health of craft beer (which the BA does not define). We are trying to measure the health of small and independent brewers,” Watson writes in a separate blog post analyzing the findings. The nuance is important. Polls show beer drinkers increasingly care about who makes their beer. Here are more juicy numbers from the BA report: The number of operating U.S. breweries grew 16.6 percent from 2015 to 2016. Small and independent breweries accounted for 99 percent of the operating breweries in the U.S. in 2016. Four Southern states — Virginia, North Carolina, Florida and Texas — each saw a net increase of more than 35 breweries in 2016. The BA report says it’s a sign the region is establishing “a strong base” for growth. (Need proof? CraftBeer.com contributor Nora McGuinnigle shows you Craft Breweries to Watch in 7 Southern Cities). Craft brewers provided nearly 129,000 jobs, according to the BA. That’s 7,000 more than in 2015. How Acquisitions Impacted Craft Beer in 2016 One factor to consider when looking at craft brewer growth year to year is how acquisitions of small breweries by large global brewers factors into the big picture. “This has been a catalyst for slower growth for small and independent brewers and endangered consumer access to certain brands,” Watson says. “Small and independent brewers were able to fill in the barrels lost to acquisitions and show steady growth.” And the smallest of those small breweries are helping keep barrel production numbers high. Watson says microbreweries and brewpubs delivered 90 percent of the craft brewer growth. The growth report is the second major news release out of the BA in March. In mid-March, the not-for-profit group released its list of Top 50 U.S. Craft Brewers. The rankings were objective, directly based on volume of beer produced by small and independent craft brewers (which some undiscerning readers mistook for a “best of” listicle, creating a firestorm on the CraftBeer.com Facebook page, asking why their favorite brewery wasn’t listed). The BA’s methodology for today’s growth report was based on data collected from the Beer Industry Production Survey (BIPS). You can read more about the data at the Brewers Association’s website. Watson will give more insight into the numbers during April’s Craft Brewers Conference in Washington, DC, and full industry analysis will be published in the May/June 2017 issue of The New Brewer. 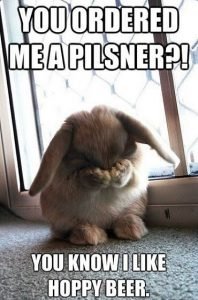 The Bushwakker will be closed on Sunday, April 16. Happy Easter!

So one day, Gramma sent her grandson Johnny down to the water hole to get some water for cooking dinner.  As he was dipping the bucket in, he saw two big eyes looking back at him.  He dropped the bucket and hightailed it for Gramma's kitchen. "Well now, where's my bucket and where's my water?" Gramma asked him. "I can't get any water from that water hole, Gramma" exclaimed Johnny.  "There's a BIG ol' alligator down there!" "Now don't you mind that ol' alligator, Johnny.  He's been there for a few years now, and he's never hurt no one.  Why, he's probably as scared of you as you are of him!" "Well, Gramma,"  replied Johnny, "if he's as scared of me as I am of him, then that water ain't fit to drink!"