Our guest tap is currently pouring the West Coast “Sneak Peek” IPA from Pile O’ Bones Brewing in Regina; $7.95 for a pint and $5.95 for a half pint. Up next is the “Blame it on the Grain” Vanilla Stout from Malty National Brewing. Our wine features for April are from Australia. The red is Hardy’s The Riddle Cabernet Merlot and the white is Banrock Station Unwooded Chardonnay. Both are $6.95 for a glass and $18.95 for a half litre. The Bushwakker has been nominated in 19 categories in the 2017 Prairie Dog “Best of Food” Regina reader’s poll. Please visit http://prairedogmag.secondstreetapp.com/l/Best-of-Food-Regina-2017/Home and cast your vote. Our nominated categories for Best in Regina include; salads, soups, local fries, burgers, veggie burgers, fish & chips, desserts, gourmet pizzas, beer menu, nachos, wings as well as best place to argue about politics, best lunch restaurant, best restaurant for a party, best scene, best downtown/central pub, best chef (Mike Monette), best bartender (Troy Bleich) and best pub/lounge server (Cheryl Tovey.) We thank you for your continued enthusiasm and support! Our Sodbuster Brown Ale is available for growler fills at the Quance Street SLGA store in Regina for the month of April. Three other new Saskatchewan brewed beers are also available. Be sure to support this SLGA pilot program and help grow Saskatchewan craft beer. New Hours of Operation. Monday to Thursday hours are now 11:00 AM to midnight and Friday and Saturday hours are 11:00 AM to 1:00 AM. Sunday hours remain unchanged at 12:00 PM to 9:00 PM. The Bushwakker Local Artist Wall for the month of April features the works of photographer, Ryan Peterman. His artist biography is as follows: When I was seven, I remember my sister getting a camera for Christmas. I loved the thing! I used it whenever I could and wanted one of my own. In my early teens, I used my mom’s old 126 “point-and-shoot” film camera. Actually, I used it until it no longer worked. (Sorry Mom!) Furthermore I was in junior high school at the time and taking a course in photography and dark-room processing.  We got to wind our own film, shoot a roll on an old Pentax with a 50mm lens, then process and print it in the classroom darkroom. There and then, I knew I was hooked! I shot nature and stock images whenever I could.  I started my first studio in 1998 specializing in fashion and glamour.  (Today it is known as boudoir.)  But life got in the way and I had to take a hiatus in 2001.  When I moved to Regina in 2008 I picked my tools up and started crafting again. When work came to an end at a local music store I was encouraged to “go pro” again.  So I started back up in October 2012 and opened a full time studio space in January 2013. In September 2014, Leftboot Nature was launched to market my nature and non-people work. To learn more about Ryan’s work please visit www.leftboot.com  or www.facebook.com/leftboot 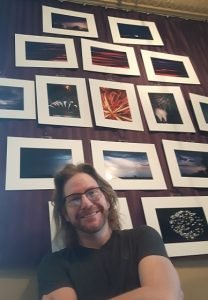 Apr. 7: First Firkin Friday. Enjoy the pomp and circumstance of this long-time Bushwakker monthly tradition. A small keg of special ale is carried throughout the pub in a procession lead by a piper from the Regina Police Services Pipes & Drums. A volunteer is selected to wield the handmade wooden maul affectionately named, The Mighty Firkin Wakker, and attempt to tap the firkin in one mighty blow. This month’s firkin offering is a dry-hopped version of our soon-to-be-released brand new Session IPA. The suds-soaking experience takes place at 5:30 PM. Apr. 10: Monday Night Jazz & Blues. ‘Round Midnight. Veteran Regina act plays jazz classics. 8:00 PM. Apr. 12: Wednesday Night Folk – SPECIAL EDITION. Redbeard’s 60th Birthday Bash. Join Regina’s #1 live music ambassador in this very significant birthday celebration. The event kicks off early with the tapping of special keg of Sexagenarian Kraken Black Spiced Rum Redbeard Ale at 6:30 PM. Four great local live acts then take the stage including: Kara Golemba, Scott Pettigrew, Lexy Desjarlais and Terraplane. A Redbeard Very Chocolate Birthday Cheesecake will also be available. Be sure to enter the Redbeard Voice Impression Contest and perhaps win a prize for Vintage Vinyl. Apr. 13: Cheryl’s 25th Anniversary Bushwakker Bash. That’s right! Bushwakker floor manager and multi-award winning server, Cheryl Tovey is celebrating a quarter century of serving up super suds and fine pub grub at the Bushwakker! Come join Cheryl in indulging in everything she loves. Live blues acts including TB Judd, Billy Hughes & Jeff Storry and Terraplane. Pop’s pizza and wing features and of course, beer! Cheryl will tap a special firkin of “Toveynator” X-Tra Malty Doppelbock. She loves malty beers and this special firkin will be another first for the Bushwakker brewery. Plan to arrive early! Cheryl kicks off the evening by tapping the firkin at 5:30 PM. Apr. 14: Good Friday. Open at noon. Apr. 16: Closed for the Holiday. Happy Easter! Apr. 17: Monday Night Jazz & Blues. Whiteboy Slim. This national award-winning blues artist will be previewing some of the material which will appear on his next CD. 8:00 PM. Apr. 17 – 22: ALES Open. One of the nation’s largest homebrewing competitions takes place in the Bushwakker basement all this week! Apr. 19: Wednesday Night Folk. Bradford. Talented guitar duo featuring Brad Papp and Mark Radford. 8:00 PM. Apr. 20: Health Science Pub. TRANSFORM THIS: Patients, the Public & the Future of Saskatchewan Health Care. Our wildly popular Science Pub Series is back for the second half of a fifth incredible season! Enjoy lectures on scientific topics of general interest in our Arizona Room (main floor banquet room) over beer and snacks. The room opens at 5:00 PM and quite often is full by 6:00 PM. Avoid disappointment and come down early for dinner and a pint before the presentation which begins at 7:00 PM. This month's lecture will be presented by Karen Eisler, Associate Dean of Nursing at U of R and Tom McIntosh, Professor of Politics and International Studies at U of R. Health care in Saskatchewan may well be at a turning point. On the service delivery front the province has gone from "Patient First" to "LEAN" to talk of 'transformational change' and recently announced the creation of a single health authority to manage the system. On the political front the government has signed an agreement with the federal government that will limit the growth in federal transfers to the province at the same time it is dealing with the challenge of a large deficit due to low resource prices. What do these changes mean for patients entering into the system?; for the health professionals who work in the system; for the citizen whose tax dollars support the system?; and for the long-stated goal of moving towards a different kind of health care system built on integrated teams, new roles for care-givers and a greater focus on prevention? The speakers will explore these questions from multiple angles to draw a picture of the system's future. 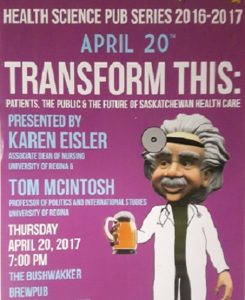 Apr. 22: Annual Bushwakker Brewer’s Dinner. Tickets to our biggest dining event of the entire year are over half sold! The theme of this year’s five-course decadent dining experience will focus on local Saskatchewan ingredients. Only 100 “Savour Saskatchewan” Brewer’s Dinner tickets will be made available. Don’t miss our biggest culinary/brewing event of the year! Tickets are $85 each. 7:00 PM. For menu information please visit https://www.facebook.com/events/187322715105560/

Alberta's Craft Breweries Have Tripled in 3 Years — with Dozens More on Tap!

Roughly 400 gathered in Red Deer for inaugural craft brewing convention CBC News The number of craft breweries in Alberta has tripled over the last three years, and the trend is expected to continue, with at least 30 new breweries being planned in Alberta this year, say industry insiders. "Alberta farmers grow some of the world's most sought after barley and agricultural products. It only makes sense to grow the brewing industry right here and support good jobs from grain to glass," said Alberta Finance Minister Joe Ceci, who was in Red Deer for the province's first Alberta Craft Brewing Convention on Wednesday. He was highlighting the $25 million earmarked for the Alberta Small Brewers Development Program announced in the 2017 budget. Terry Rock, executive director of the Alberta Small Brewers Association, said the province has 54 brewing licenses now compared to 18 in 2014. "It's a real economic diversification story that Albertans should be proud of," said Rock, one of hundreds who attended the convention. Brewers say the proliferation of micro-breweries was made possible after the province removed minimum production limits in 2013. "So now everyone's allowed to start and play in this space, as opposed to the big guys that used to have that minimum production value that you used to need," said Dan Allard, co-owner of Cold Garden, a new brewery that opened this year in Inglewood. Local brewer Dan Allard says the new generation of brewers is getting along quite well.  'The saturation thing has been buzzing around .... but we're so far from that,' he says. Old laws required brewers to produce 500,000 litres per year in order to sell commercially. Allard says there's lots of room for growth, and he's not at all worried about the competition. "The camaraderie is very good, and it'll be like that for a long time," he said. "There's a lot of market share to chip away at from the big guys before we ever step on each others' toes as the little guys. And so it's a very friendly space to be working in, and consumers love it," he said. Not just breweries The craft beer boom is also ripping through rural Alberta, said Ben Leon, co-owner of Dandy Brewing Company. Leon said he's witnessed an explosion of small-town micro-malters and hops and barley farmers, who are creating much-needed jobs. "The industry isn't just supporting breweries. It's supporting the entire brewing industry, and that's pretty awesome," he said. Rock says craft beer still has a long way to go in Alberta, where it currently commands less than 10 per cent of the market share. But he's confident that's going to grow. "People don't stop drinking craft beer and go back to industrial beer. Once they figure it out, and once they have their local favourites, they're a craft beer drinker for life." Rock said there are even breweries that will soon spring up in Ponoka and Jasper. "Pretty much everywhere you are in the province, you have a local option now. We hope people take advantage of that."

An old farmer in Kansas had owned a large farm for several years. He had a large pond in the back, fixed up nice; picnic tables, horseshoe courts, and some apple and peach trees.  The pond was properly shaped and fixed up for swimming when it was built. One evening the old farmer decided to go down to the pond,  as he hadn't been there for a while, and look it over.  He grabbed a five gallon bucket to bring back some fruit.  As he neared the pond, he heard voices shouting and laughing with glee. As he came closer he saw it was a bunch of young women skinny-dipping in his pond.  He made the women aware of his presence and they all went to the deep end of the pond. One of the women shouted to him, "We're not coming out until you leave!" The old man frowned and grumbled, "I didn't come down here to watch you ladies swim naked or make you get out of the pond naked."  Holding the bucket up he said, "I'm here to feed the alligator.