Our guest tap is currently pouring the “Blame it on the Grain” Vanilla Stout from Regina’s Malty National Brewing; $7.95 for a pint and $5.95 for a half pint. Up next is a Dry-Hopped Saison from Black Bridge Brewery in Swift Current. Our wine features for April are from Australia. The red is Hardy’s The Riddle Cabernet Merlot and the white is Banrock Station Unwooded Chardonnay. Both are $6.95 for a glass and $18.95 for a half litre. The Bushwakker has been nominated in 19 categories in the 2017 Prairie Dog “Best of Food” Regina reader’s poll. Please visit http://prairedogmag.secondstreetapp.com/l/Best-of-Food-Regina-2017/Home and cast your vote. Our nominated categories for Best in Regina include; salads, soups, local fries, burgers, veggie burgers, fish & chips, desserts, gourmet pizzas, beer menu, nachos, wings as well as best place to argue about politics, best lunch restaurant, best restaurant for a party, best scene, best downtown/central pub, best chef (Mike Monette), best bartender (Troy Bleich) and best pub/lounge server (Cheryl Tovey.) We thank you for your continued enthusiasm and support! Our Sodbuster Brown Ale is available for growler fills at the Quance Street SLGA store in Regina for the month of April. Three other new Saskatchewan brewed beers are also available. Be sure to support this SLGA pilot program and help grow Saskatchewan craft beer. New Hours of Operation. Monday to Thursday hours are now 11:00 AM to midnight and Friday and Saturday hours are 11:00 AM to 1:00 AM. Sunday hours remain unchanged at 12:00 PM to 9:00 PM. 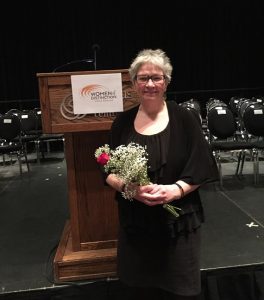 Congratulations to Bushwakker floor manager, Cheryl Tovey! Cheryl is a 2017 YWCA Women of Distinction Awards nominee in the Community Leadership and Enhancement category.

Apr. 3: Monday Night Jazz & Blues. AZ Paris. A return engagement from this rockin’ blues trio. 8:00 PM. Apr. 5: Monthly ALES Meeting.  The ALES club will be preparing to host one of the largest homebrewing competitions in the nation from April 17 -22. Last year’s ALES Open drew over 750 beer entries from coast to coast! Our annual Bushwakker Brewer’s Dinner plays a role in this national beer celebration. In addition to discussing competition execution strategies, the club will also be presenting topics of discussion concerning; Specialty IPA, Hop Aroma and Single Hopped Beer. Meetings are held in the Bushwakker basement clubroom and start at 8:00 PM. New members are always welcome! Apr. 5: Wednesday Night Folk. Ron Loos. Veteran guitar plucker and “insightful” lyricist returns. 8:00 PM. Apr. 7: First Firkin Friday. Enjoy the pomp and circumstance of this long-time Bushwakker monthly tradition. A small keg of special ale is carried throughout the pub in a procession lead by a piper from the Regina Police Services Pipes & Drums. A volunteer is selected to wield the handmade wooden maul affectionately named, The Mighty Firkin Wakker, and attempt to tap the firkin in one mighty blow. This suds-soaking experience takes place at 5:30 PM. Apr. 10: Monday Night Jazz & Blues. ‘Round Midnight. Veteran Regina act plays jazz classics. 8:00 PM. Apr. 12: Wednesday Night Folk – SPECIAL EDITION. Redbeard’s 60th Birthday Bash. Join Regina’s #1 live music ambassador in this very significant birthday celebration. The event kicks off early with the tapping of special keg of Sexagenarian Kraken Black Spiced Rum Redbeard Ale at 6:30 PM. Four great local live acts then take the stage including: Kara Golemba, Dan Crozier, Lexy Desjarlais and Terraplane. A Redbeard Very Chocolate Birthday Cheesecake will also be available. Be sure to enter the Redbeard Voice Impression Contest and perhaps win a prize for Vintage Vinyl. Apr. 13: Cheryl’s 25th Anniversary Bushwakker Bash. That’s right! Bushwakker floor manager and multi-award winning server, Cheryl Tovey is celebrating a quarter century of serving up super suds and fine pub grub at the Bushwakker! Come join Cheryl in indulging in everything she loves. Live blues acts including TB Judd, Billy Hughes & Jeff Storry and Terraplane. Pop’s pizza and wing features and of course, beer! Cheryl will tap a special firkin of “Toveynator” X-Tra Malty Doppelbock. She loves malty beers and this special firkin will be another first for the Bushwakker brewery. Plan to arrive early! Cheryl kicks off the evening by tapping the firkin at 5:30 PM. Apr. 17: Monday Night Jazz & Blues. Whiteboy Slim. This national award-winning blues artist will be previewing some of the material which will appear on his next CD. 8:00 PM. Apr. 17 – 22: ALES Open. One of the nation’s largest homebrewing competitions takes place in the Bushwakker basement all this week! Apr. 19: Wednesday Night Folk. Bradford. Talented guitar duo featuring Brad Papp and Mark Radford. 8:00 PM. Apr. 20: Health Science Pub. TRANSFORM THIS: Patients, the Public & the Future of Saskatchewan Health Care. Our wildly popular Science Pub Series is back for the second half of a fifth incredible season! Enjoy lectures on scientific topics of general interest in our Arizona Room (main floor banquet room) over beer and snacks. The room opens at 5:00 PM and quite often is full by 6:00 PM. Avoid disappointment and come down early for dinner and a pint before the presentation which begins at 7:00 PM. This month's lecture will be presented by Karen Eisler, Associate Dean of Nursing at U of R and Tom McIntosh, Professor of Politics and International Studies at U of R. Apr. 22: Annual Bushwakker Brewer’s Dinner. The theme of this year’s five-course decadent dining experience will focus on local Saskatchewan ingredients. Only 100 “Savour Saskatchewan” Brewer’s Dinner tickets will be made available. Don’t miss our biggest culinary/brewing event of the year! Tickets are $85 each. 7:00 PM.

Using Craft Beer as a Vehicle for Good – a Local Perspective

Almost four years ago Bev and Elaine Robertson, founders and developers of the Bushwakker Brewpub, announced a gift to the Johnson Shoyama Graduate School of Public Policy of a half million dollars. The JSGSPP is a rare bird; it has offices, researchers, classes and students at both the University of Saskatchewan and the University of Regina. The Robertsons wanted their donation to be used to strengthen the impact of Science on Public Policy. Some people may find it difficult to differentiate between Public Policy and Politics. So then, in a nut shell, “Politics” is about achieving the power to decide what a government will do, and “Public Policy” is about deciding what governments really should do and how to get it done. However, an insightful aphorism states that if an idea can be accurately put in a nut shell, it probably should. Wikipedia offers detailed explanations of both Public Policy and Politics. In particular the Robertsons wanted to strengthen the links by which Science usually affects Public Policy; through the chain science/media/voting public/politics/policy. Examples of relevant issues are; vaccinations, fluoridation, GMOs, gluten, energy options, risk, organic food, Vitamin B 17 cancer therapy, etc. The Robertsons asked that their donation be used partly for the support of graduate students and that some be used as seed money to organize and fund activities that could leverage further donations for Science and Innovation Policy study. The donation is being transferred to the control of the JSGSPP over a five year period and roughly 2/3 has been donated so far, but much has already happened at JSGSPP relating to Science Policy. It turns out that the general topic of Public Policy related to Science and Innovation is a topic that has recently come to the forefront of both political and policy discussion. For instance, the Federal Government has promised $800,000,000 to be spent on “Innovation” over the next four years. It is the job of Science and Innovation Public Policy, wherever studied, to ensure that the taxpayer gets the biggest bang for their buck with this federal expenditure. A number of faculty members within the JSGSPP are already studying various aspects of Science and Innovation Policy, including energy, bioscience and food security, bio-medical science and society.  In addition, a number of Masters and Doctoral  students  are  now involved  in  thesis research that addresses Science and Innovation Policy issues. The original donation has helped the JSGSPP secure $7 million in total funding for Science and Innovation Policy study from a variety of sources. The creation of a Centre for Science and Innovation Policy (CSIP), located at both Universities, was announced on March 8 and 13 of this year. The donation so far from the Robertsons has then been leveraged by a factor of 20. However, while there are several other factors beyond the donation that have contributed to the outstanding funding success of CSIP; the creation of a Centre would not have possible without the Robertsons. Their donation seems to have caught the crest of the perfect wave. CSIP is destined to become an internationally recognized Centre for Science and Innovation Policy. 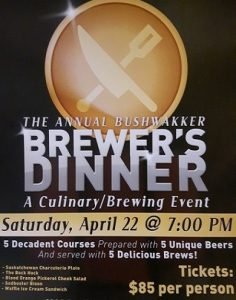 Tickets to our biggest dining event of the entire year are on sale now!

A Saskatchewanian was on holiday in the depths of Florida, where he tried to buy some Alligator shoes.  However, he was not prepared to pay the high prices.  After failing to haggle the vendor down to a reasonable price level, he ended up shouting, "I don't give too hoots for your shoes.  I'll go out and kill my own alligator!"  To which the shop keeper replied, "By all means, just watch out for the two Newfoundlanders who are doing the same thing!" The Saskatchewanian went out into the swamp.  After a while he saw two men with spears, standing in the water.  "They must be the two Newfoundlanders" he thought. Just at that point he noticed an alligator moving in the water towards one of them.  The Newfoundlander stood completely passive, as the gator came even closer to him.  Just as the beast was about to swallow the one Newfoundlander, the other struck home with his spear and wrestled the alligator up onto the beach, where several others already laid. Together the two Newfoundlanders threw the gator onto his back, where-upon one exclaimed, "Damn!  This one doesn't have any shoes either."