Our guest tap is currently pouring Chestnut Ale (yes, roasted chestnuts are in this brown ale) from the Whistler Brewing Company in BC; $7.50 for a pint and $5.50 for a half pint. Following that we will pour a Ginger Apple Cider from the Lonetree Cider Company in BC.  A Vanilla Stout from Regina’s Malty National Brewing is also on deck. Our premium wines for March are from the Henry of Pelham Winery in Ontario. The red is a Baco Noir VQA and the white is a Sauvignon Blanc VQA; $7.50 for a glass and $21.95 for a half litre. Our Dungarvon Irish Red Ale is available for growler fills at the Quance Street SLGA store in Regina for the month of March. Three other new Saskatchewan brewed beers are also available. Be sure to support this SLGA pilot program and help grow Saskatchewan craft beer. New Hours of Operation. Monday to Thursday hours are now 11:00 AM to midnight and Friday and Saturday hours are 11:00 AM to 1:00 AM. Sunday hours remain unchanged at 12:00 PM to 9:00 PM. Bushwakker Sundays just got even better! Enjoy our new Sunday Steak & Eggs Feature for only $15.95. Our Bushwakker Local Arts Wall features the works of Candace Tirk for the month of March. Her biography as an artist follows. Candace Tirk (nee Pastl).  Candace was born and raised on a farm near Watson, Sk.  Nature has always provided her with a source of joy and comfort and has inspired her many creative adventures. The creative energy of painting has moved within her for many years and in 2000, she began to explore painting in acrylics, oil and watercolors. In 2009 Candace also self-published a book called, "Messages from the Heart, a journal for self-discovery".  This book contains inspirational verses she has written as well as some of her paintings and photos. If you are interested in reaching Candace you can email her at messagesfromtheheart@live.ca 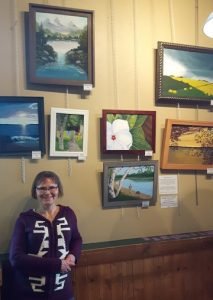 Mar. 13: Monday Night Jazz & Blues. The U of R Jazz Band.  Don’t miss their final Bushwakker performance until the fall. Come experience the future of Regina jazz stars at 8:00 PM. Mar. 15: Wednesday Night Folk. Tara Dawn & Anna. Long-time musical duo returns for a rollicking night of rock, blues, folk and funk. 8:00 PM. Mar. 16: Science Pub Series edition #40 - Locating Science in Policy and Policy for Science in Canada. Our wildly popular Science Pub Series is back for the second half of a fifth incredible season! Enjoy lectures on scientific topics of general interest in our Arizona Room (main floor banquet room) over beer and snacks. The room opens at 5:00 PM and quite often is full by 6:00 PM.Avoid disappointment and come down early for dinner and a pint before the presentation which begins at 7:00 PM. This month's lecture will be presented by Dr. Peter W.B. Phillips from the University of Saskatchewan part of the Johnson/Shoyama Graduate School for Public Policy. (The other part is at the U of R). While scientific knowledge and technological applications are at the heart of the modern socio-economic enterprise, it is increasingly difficult finding where science fits in the policy system.  In the immediate post-war era there was a rising fear that scientists occupied a privileged position in liberal democracies. Now the fear is just the opposite—policy debates about science and its uses engages a much wider group of interested and motivated actors, so much so that it sometimes is hard to hear the scientific perspective.  This talk will explore the conundrum of the ubiquitous presence of science and its perceived lack of impact on policy decisions and outcomes. 7:00 PM. Mar. 17: A Traditional St. Patrick’s Day Party. The big day falls on a Friday this year so we are making a few tweaks to our program. Things kick off earlier than normal with the tapping of an incredibly delicious firkin of Irish Coffee Oatmeal Stout at 5:30 PM. Enjoy performances from The Regina Police Pipes and Drums, The Prairie Gael School of Irish Dance and then great acoustic Celtic music from the very large group, Billarney. Enjoy pints of Guinness, drams of Teeling single malt Irish whiskey, Irish ciders, Innis & Gunn Irish Whiskey Stout, as well as our very own Green Shamrock Ale. Delicious traditional Irish food features will also please your palate BOTH Friday and Saturday including an All Day Irish Breakfast (yes, there will be black & white breakfast pudding), our incredibly popular Smoked Salmon Platter, house-made Corn Beef & Cabbage and Irish Chocolate Stout Cake!  $5 cover charge begins at 4:30 PM. Mar. 20: Monday Night Jazz & Blues. Terraplane. Regina’s friendliest bluesman, Shane Reoch, leads this four piece “family” blues act. 8:00 PM. Mar. 22: Wednesday Night Folk. James Irving. Lead singer of veteran Saskatchewan rock band, Nickeltree, displays his songwriting chops. 8:00 PM. Mar. 25: Sask Sampler. Our biggest folk music event of the year! A full evening of top-notch Saskatchewan music! Up-and-coming folk artists from across the province strut their stuff, vying for a spot on The Regina Folk Festival, Ness Creek Music Festival and Gateway Music Festival stages. This year’s line-up includes: Scott Richmond, Denise Valle, The Wolfe, Government Town, In With the Old and The Garrys. Cover charge in effect. 7:30 PM. Mar. 27: Monday Night Jazz & Blues. The Jazz Band-Its. The biggest band to ever grace the Bushwakker stage plays big band, jazz and swing. 8:00 PM. Mar. 29: Wednesday Night Folk. A Storry with Hughes. Veteran guitarmen, Billy Hughes and Jeff Storry return. 8:00 PM.

The Allure of New and Why We Shouldn’t Diss Mainstays

Jason Foster    onbeer.org A couple weeks back I wrote a post reflecting on my visits to Calgary’s newest and second oldest breweries (which you can read here). The visits got me pondering the similarities and differences between older and newer breweries. Since that post I have been pondering the issue further. More specifically I contemplated the tendency in today’s fast moving beer culture to seek out the new and interesting and, by extension, dismiss the older and more familiar. Those musings grew up into a Beer 101 column, which was published last week. You can read the article here. The origins of my musings have been commentary recently about how great the “new” breweries are in western Canada combined with a subtle (and sometimes not so subtle) disparaging of the more established craft breweries in the area. Not all ascribe to this line of thinking, but I have heard it enough times in recent months to believe it to have some traction among a portion of the craft beer consumer. My piece attempts to break down the logic in that argument – more specifically the errors in that logic. I argue it actually starts from a reasonable and natural tendency; we all are attracted to the new and unusual and can get bored with the things with which we are most familiar.  It is totally fair to be excited to get your first pint of that new brewery’s first release or the latest beer you have never tried before. The problem comes when we try to contrast the more familiar beer with the excitement of that new-ness. The latter naturally pales in comparison. I dub that tendency Shiny New Thing Syndrome (SNTS). It is something we can all be afflicted with but must work to avoid. The second logical flaw is the presence of selective vision. We tend to compare that fancy new Double IPA or Kettle Sour from the new brewery (because that is what catches our attention) to the most accessible of the older brewery’s beer. It is an unfair comparison. Related to that is the third logical issue: ignoring sales. Sure, beer aficionados get excited about that new Imperial Stout or SMASH (Single-Malt-Single-Hop) beer – and we should. Be we shouldn’t ignore that the brewery that just put out that amazing East Coast IPA also likely has a session ale, blonde ale or some similarly accessible style in their line-up. And in most cases (admittedly not all) that accessible beer is their best-selling beer. How is that so different than the 20-year-old brewery whose bills are paid by a fruit beer or a blonde lager? It is the reality of selling beer in Western Canada, what is undoubtedly still an emerging craft beer market. Breweries, at the end of the day, need to be financially sustainable and producing a beer people like is not a bad thing. Besides, what is inherently wrong with a fruit wheat beer or blonde ale? Sure, fruit beers are not really my cup of tea (ale?), but if it is well made and honestly marketed,  who  am I  to  say it isn’t a worthwhile beer?  We have to be careful not to let our more experienced palates lead to snobbery. Beer is supposed to be a social drink after all. It is a false dichotomy, this new vs. old. Drink the beer you like. Respect all craft breweries who make well-executed beer, no matter how long it has been on offer. 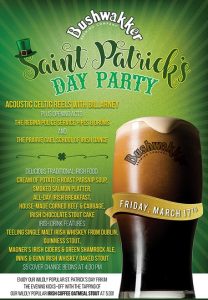 I was visiting my daughter last night when I asked if I could borrow a newspaper. "This is the 21st century" she said. "We don't waste money on newspapers. Here, use my iPad." I can tell you this....that damned fly never knew what hit him! A couple of old guys were golfing when one mentioned that he was going to go to Dr. Smith for a new set of dentures in the morning. His elderly buddy remarked that he, too, had gone to the very same dentist two years before. "Is that so?" asked the first old guy. "Did he do a good job?" The second oldster replied, "Well, I was on the golf course yesterday when a guy on the next fairway hooked a shot. The ball must have been going at least 200 mph when it smacked me right in the testicles." The first old guy was confused and asked, "What the hell does that have to do with your dentures?" "It was the first time my teeth didn't hurt....."