Our guest tap is currently pouring the Chestnut Ale (yes, roasted chestnuts are in this brown ale) from the Whistler Brewing Company; $7.50 for a pint and $5.50 for a half pint. Next up is a Ginger Apple Cider from the Lonetree Cider Company in BC. Our premium wines for March are from the Henry of Pelham Winery in Ontario. The red is a Baco Noir VQA and the white is a Sauvignon Blanc VQA; $7.50 for a glass and $21.95 for a half litre. Our Dungarvon Irish Red Ale is available for growler fills at the Quance Street SLGA store in Regina for the month of March. Three other new Saskatchewan brewed beers are also available. Be sure to support this SLGA pilot program and help grow Saskatchewan craft beer. New Hours of Operation. Monday to Thursday hours are now 11:00 AM to midnight and Friday and Saturday hours are 11:00 AM to 1:00 AM. Sunday hours remain unchanged at 12:00 PM to 9:00 PM. Bushwakker Sundays just got even better! Enjoy our new Sunday Steak & Eggs Feature for only $15.95.

Mar. 3: First Firkin Friday. The Vanilla Porter firkin gets tapped at 5:30. Plan to arrive early and pre-order your firkin pint! The longstanding Bushwakker tradition continues! On the first Friday of each month a small keg (firkin) of special ale is carried throughout the pub in a procession lead by a piper from The Regina Police Services Pipes & Drums. A volunteer then wields the enormous handmade wooden maul affectionately named, The Mighty Firkin Wakker, and attempts to tap the keg of creative brew in one mighty blow. To view some of the more notable messy tappings, visit https://www.youtube.com/ watch?v=OGb9MM34Zsc and watch our First Firkin Friday 25 Year Edition video! Mar. 4: The Annual Saturday Afternoon Blues Showcase. Presented in conjunction with The Regina Delta Blues Association and the 23rd Mid-Winter Blues Festival Week, the free Saturday afternoon showcase is our biggest blues event of the year! Enjoy three local blues acts on the Bushwakker stage including: Brent Neilsen & Kara Golemba, Billy Hughes & Jeff Storry, and Evan Chambers & the Third Alarm. Hosted by Jeff “Redbeard” Corbett of 91.3 FM CJTR Regina Community Radio. Perhaps try a slice of his signature Redbeard’s Chocolate-Chocolate Cheesecake! 1:15 PM –4:30 PM. Mar. 6: Monday Night Jazz & Blues. Jeff Mertick & Jason Fiske. Veteran Regina musicians return for a soulful blues performance. 8:00 PM. Mar. 8: Wednesday Night Folk. Lexy Desjarlais. You may know Lexy as a Bushwakker bartender/server but she is also a very talented singer and guitar player. 8:00 PM. Mar. 13: Monday Night Jazz & Blues. The U of R jazz Band.  Don’t miss their final Bushwakker performance until the fall. Come experience the future Regina jazz starts! 8:00 PM. Mar. 15: Wednesday Night Folk. Tara Dawn & Anna. Longtime musical duo returns for a rollicking night of rock, blues, folk and funk. 8:00 PM. Mar. 16: Science Pub Series edition #40 - Locating Science in Policy and Policy for Science in Canada. Our wildly popular Science Pub Series is back for the second half of a fifth incredible season! Enjoy lectures on scientific topics of general interest in our Arizona Room (main floor banquet room) over beer and snacks. The room opens at 5:00 PM and quite often is full by 6:00 PM. Avoid disappointment and come down early for dinner and a pint before the presentation which begins at 7:00 PM. This month's lecture will be presented by Dr. Peter W.B. Phillips from the University of Saskatchewan. While scientific knowledge and technological applications are at the heart of the modern socio-economic enterprise, it is increasingly difficult finding where science fits in the policy system.  In the immediate post-war era there was a rising fear that scientists occupied a privileged position in liberal democracies. Now the fear is just the opposite—policy debates about science and its uses engages a much wider group of interested and motivated actors, so much so that it sometimes is hard to hear the scientific perspective.  This talk will explore the conundrum of the ubiquitous presence of science and its perceived lack of impact on policy decisions and outcomes. 7:00 PM. 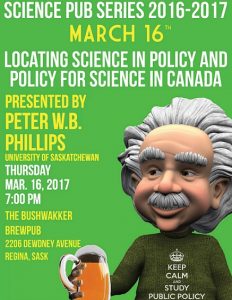 Mar. 17: A Traditional St. Patrick’s Day Party. The big day falls on a Friday this year and we are making a few tweaks to our program. Things kick off earlier than normal with the tapping of an incredibly delicious firkin of Irish Coffee Oatmeal Stout at 5:30 PM. Enjoy performances from The Regina Police Pipes and Drums, The Prairie Gael School of Irish Dance and then great acoustic Celtic music from the very large group, Billarney. Enjoy pints of Guinness, drams of Teeling single malt Irish whiskey, Irish ciders, Innis & Gunn Irish Whiskey Stout, as well as our very own Green Shamrock Ale. Delicious traditional Irish food features will also please your palate BOTH Friday and Saturday including an All Day Irish Breakfast (yes, there will be black & white breakfast pudding), our incredibly popular Smoked Salmon Platter, house-made Corn Beef & Cabbage and Irish Chocolate Stout Cake!  $5 cover charge begins at 4:30 PM.

Piling Up Good Beer the Focus of Pile O’ Bones

By Jason Foster   onbeer.org It’s amazing what can happen when four avid homebrewers stumble across a commercial brewing system. About a year ago Glenn Valgardson, David Freeman, Brent Babyak and Josh Morrison, who are all longtime homebrewers and stalwarts of Regina’s Ale and Lagers Enthusiasts of Saskatchewan (ALES) –one of the country’s biggest and most successful homebrew clubs – were offered an opportunity to take over the derelict brewing system in the basement of O’Hanlon’s Pub. O’Hanlon’s is a longtime, popular downtown Regina pub that has long offered Saskatchewan beer as part of its diverse beer line-up. About a decade ago they made a short-lived attempt to become a brewpub. They installed a 7-barrel brewhouse in the basement of the pub and tried to make beer. Unfortunately it was a day early and a dollar short. “They found out it was difficult to operate a brewery in the Regina market, especially if you didn’t use real brewers,” says Freeman. O’Hanlon’s cut their losses and shuttered the brewery. It has sat dormant for years. But the four partners jumped at the opportunity to revitalize it, even if it was not the ideal space. You see, it is located in the basement of O’Hanlon’s, basically in “a storage room of the parking garage underneath the pub,” notes Valgardson. They spent the last year renovating and upgrading the space and equipment to make it suitable for a production brewery – including an insane amount of cleaning and sanitizing the derelict equipment. Still, it remains an unusual system. “It is Saskatchewan’s only electric-fired brewhouse. We also have three dish-bottom fermenters,” says Freeman. Dish-bottom fermenters have a flatter bottom than conicals, which can change a number of factors in the brewing process. Working in the spacious basement brewery, they have called their burgeoning operation Pile O’ Bones Brewing. They have had beer on the market since mid-December and they are slowly ramping up production. At the moment they are keg-only, given their space constraints, but do have some bigger plans for the future. Their vision for the beer sticks close to their homebrewing roots. “We aim to create classically styled craft beer that is executed well,” says Babyak. “We are about malt and hops. Not saying we won’t use experimental adjuncts, but that is not what we are about. We are not worried about throwing a bunch of spices in. We want to produce traditional beer. None of us are afraid to do things the hard way.” They are also trying to carve their own niche in Regina’s beer scene. “We looked at the market and tried to see where the holes are” says Freeman. They don’t see local operations like Bushwakker and Rebellion as competitors, and so want to find a way to co-exist alongside them. As for the beer themselves, for now they have landed on four beer to focus on, with seasonals coming in the future. Their core line-up includes: a Red IPA, “hoppy but not too light or too dark”; a White IPA, “we wanted something that your girlfriend would like as well as craft drinkers”; a Chocolate Stout, “a darker beer but we didn’t want it to be too roasty or have too much coffee”; and their most recent, a Pale Ale, which is “something approachable for the average beer drinker”. They have also just released their first attempt at a Blonde Ale. They are not sure if it will join the others as a regular offering and are waiting on customer reaction to decide. As mentioned, the plan is once the core beers are established (and they buy more fermenters), they will release various seasonals and one-offs. The immediate plan is to offer keg only, but in the longer term they hope to upgrade to a packaging line of some sort. One of their hopes is to have the space to age some unique beer they can sell in bottles as a special offering. The Four Partners In addition to being homebrewers, the four bring other valuable skills to operating a brewery. Valgardson is a certified mechanic, Morrison is a lawyer, Freeman is involved in communications and market research, and Babyak is in IT. Not a bad combination of skills for opening a brewery. For the moment they are all keeping their day jobs, plus some of them have young families. “We are being weekend and night-time warriors,” says Valgardson. As for the name, most locals understand the reference. It is connected to the original name for Regina. It was a good hunting ground for Indigenous hunters. They developed the practice of leaving piles of buffalo bones behind with the thought that the remaining buffalo would come back to visit the bones. As a result, original European settlers called the area Pile of Bones. The name Regina came after when they formally incorporated the town. “We picked the name because we wanted to pay homage to the history of Regina and the place we come from,” says Freeman. “We wanted to make sure when a customer saw the logo and the name they knew we were from Regina and not some random craft brewery. We want them to know it was beer made right here in Regina.” The group is a bit vague on their long term plans – they are focused right now on just getting up and running, but they envision an operation that supports them all full-time and produces beer that can be sold across the province. Whether that is in their current space or they open a new brewery elsewhere is still an open question. But for now Regina beer drinkers can pile on in their support for Pile O’ Bones Brewing. Editor’s note: The ALES Club was co-founded by Bushwakker developer Bev Robertson. The club meets at the Bushwakker Brewpub on the first Wednesday of the month at 8:00 PM in the basement clubroom. 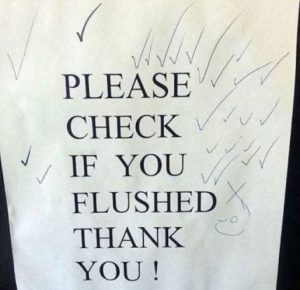 Proudly showing off his new apartment to a couple of friends late one night the drunk led the way to his bedroom where there was a big brass gong. "What's that big brass gong for?" one of the guests asked. "It's not a gong. It's a talking clock" the drunk replied. "A talking clock? Seriously?" asked his astonished friend. "Yup" replied the drunk. "How's it work?" the second guest asked, squinting at it. "Watch" the man said. He picked up a hammer, gave it an ear shattering pound and stepped back. The three stood looking at one another for a moment. Suddenly, someone on the other side of the wall screamed "You friggin' IDIOT! It's ten past three in the morning!"