Our guest tap is currently pouring the Britisher English Brown Ale from the Churchill Brewing Company in Saskatoon; $7.95 for a pint and $5.95 for a half pint. Next up is the Dang IPA from Regina’s Malty National Brewing. Following that we will pour the Nokomis Craft Ales Black IPA. Our premium wines for February are from the Yalumba Winery in Australia. The red is a Shiraz and the white is a Pinot Grigio; $8.50 for a glass and $22.95 for a half litre. Our Palliser Porter is available for growler fills at the Quance Street SLGA store in Regina for the month of February. Three other new Saskatchewan brewed beers are also available. Be sure to support this SLGA pilot program and help grow Saskatchewan craft beer. New Hours of Operation. Monday to Thursday hours are now 11:00 AM to midnight and Friday and Saturday hours are 11:00 AM to 1:00 AM. Sunday hours remain unchanged at 12:00 PM to 9:00 PM. Our Bushwakker Local Artist Wall for the month of February features the works of Kathryn Gorectke. 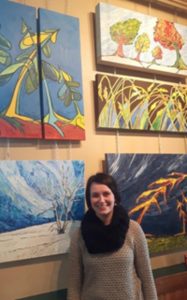 Her artist bio is as follows: I am a prairie artist. I have had a lifelong love for art, but dove into acrylics approximately six years ago. For the most part I am self- taught, however I have been encouraged along the way by many extraordinary teachers. I now find myself surrounded by a group of artists who spur me on in my pursuit of painting. I am inspired by creation; particularly skies and trees. I love to look at landscapes; while in nature or from a photograph and visualize the transformation into a painting. There are so many landscapes just waiting to be painted!  Stop in all this month to enjoy her creative talents! To learn more about Kathryn and her work, please visit her facebook page at https://www.facebook.com/pages/Kathryn-Gorectke-Art/591285287590290

Sat., Feb. 18 and Sun., Feb. 19: Regina Art Collective - Second Annual "PAINTING, POTTERY & A PINT" ART SHOW and SALE in support of the Regina Humane Society.  The Regina Art Collective is a group of dedicated and talented artists who believe that as a group, they can better benefit the art community. They will be presenting their second annual art show and sale in the Bushwakker Arizona Room. It will include a variety of original paintings, photography, polymer clay, sculptural pieces, ceramics, pottery and mixed media. Opening day is Saturday, February 18 from 11 AM to 7 PM. The show continues on Sunday, February 19 from noon to 6 PM. Feb. 20: Closed for the Family Day holiday. Feb. 22: Wednesday Night Folk. Mabaleka. Modern country-folk duo from Saskatoon returns for an encore performance. 8:00 PM. Feb. 27: Monday Night Jazz & Blues MID-WINTER BLUES FESTIVAL EDITION presents Christie-Anne Blondeau. This powerful vocalist kicks off the 2017 festival in fine form. 8:00 PM.

One dark night outside Vegreville a town in Eastern Alberta, a fire started inside the local sausage plant and in a blink it exploded into massive flames. The alarm went out to all the fire departments from miles around. When the volunteer fire fighters appeared on the scene, the sausage company president rushed to the fire chief and said,   "All of our secret formulas are in the vault in the center of the plant. They must be saved and I will give $50,000 to the fire department that brings them out intact." But the roaring flames held the firefighters off. Soon more fire departments from surrounding towns had to be called in as the situation became desperate. As the firemen arrived, the president shouted out that the offer was now $100,000 to the fire department who could bring out the company's secret files. From a distance, a lone siren was heard as another fire truck came into sight. It was the nearby Mundare volunteer fire department composed mainly of Ukrainians over the age of 65. To everyone's amazement, the little run-down fire engine, operated by these Ukrainians, passed all the newer sleek engines parked outside the plant and drove straight into the middle of the inferno. Outside, the other firemen watched as the Ukrainian old timers jumped off and began to fight the fire with a performance and effort never seen before. Within a short time, the old-timers had extinguished the fire and saved the secret formulas. The grateful sausage company president joyfully announced that for such a superhuman feat he was upping the reward to $200,000, and walked over to personally thank each of the brave, though elderly, Ukrainian firefighters. The Edmonton TV news reporters rushed in after capturing the event on film asking, "What are you going to do with all that money?" "Vell," said Nick Sputski, the 70-year-old fire chief, ".....da furst thing vee gonna do is fix da brakes on dat focking old truck." !!!! 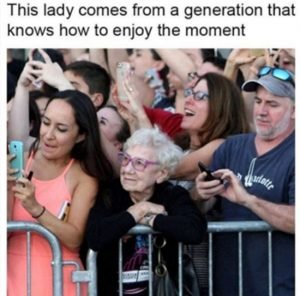