Our premium wines for February are from the Yalumba Winery in Australia. The red is a Shiraz and the white is a Pinot Grigio. Both are $8.50 for a glass and $22.95 for a half litre. Our guest tap is currently pouring the “Lait Lady Lait” Coffee Milk Stout from Regina’s Malty National Brewery. $7.95 for a pint and $5.95 for a half pint. Next up is an Oatmeal Session Pale Ale from the Black Bridge Brewery in Swift Current. New Hours of Operation. Monday to Thursday hours are now 11:00 AM to midnight and Friday and Saturday hours are 11:00 AM to 1:00 AM. Sunday hours remain unchanged at 12:00 PM to 9:00 PM. Our Palliser Porter is available for growler fills at the Quance Street SLGA store in Regina for the month of February. Three other new Saskatchewan brewed beers are also available. Be sure to support this SLGA pilot program and help grow Saskatchewan craft beer. The Bushwakker is now OPEN ON SUNDAYS from Noon to Nine. Enjoy our Sunday Steak & a Pint feature.

Feb. 3: First Firkin Friday. Enjoy the pomp and circumstance of this longstanding Bushwakker monthly tradition. A piper from the Regina Police Services Pipes & Drums leads a small keg of special beer in a procession throughout the pub. Bushwakker head brewer, Michael Gaetz will brew a cold-pressed coffee and hazelnut Arctic Dark Munich Dunkel. Enjoy the suds soaking spectacle tapping at 5:30 PM. Feb. 6: Monday Night Jazz & Blues.  The U of R Jazz Band. Come witness Regina’s up-and-coming jazz stars. This is one big band! 8:00 PM. Feb. 8: Archives Week ‘Perspectives on the Northwest Resistance.’ Presented by the Provincial Archives of Saskatchewan as part of Archives Week. This two hour event will feature readings from never- before-seen 1885 dispatches to and from the war front, and excerpts from Louis Riel’s diary. Speakers include Prof. James Daschuk and Prof. Sylvain Rehault from the University of Regina, Darren Prefontaine from the Gabriel Dumont Institute, and master of ceremonies Frank Korvemaker, and characters from the ‘Trial of Louis Riel’ play. Archives Week showcases the role that archives and archivists play in preserving and making available Saskatchewan's documented heritage. Activities in communities across the province include celebrity reading events, film nights, open houses, exhibits and more. 7:00 PM. 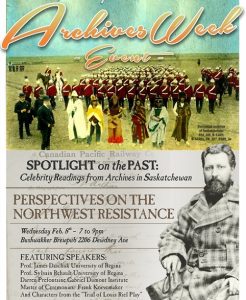 Feb. 8: Wednesday Night Folk. The Empire Associates.  A return engagement from this powerful husband and wife folk duo. 9:00 PM. *Note later start time due to Sask Archives event. Feb. 13: Monday Night Jazz & Blues. ‘Round Midnight. Veteran Regina act plays popular jazz. 8:00 PM. Feb. 14: Valentine Mead Tasting Event. Treat yourself or bring your honey to this Honey Wine event! Sample five mead offerings from Prairie Bee Meadery - Saskatchewan’s only full-time meadery. Their products incorporate locally produced honey and fruit, much of which is grown on their own land. Meadery founder, Vickie Dirksen will share her story and lead you through the mead making process. Tickets only $20 each. Only 50 tickets available. 7:30 PM. An optional special Valentine’s Mead Tasting Dinner featuring Veal Osso Buco with Pancetta Milanese as well as Italian Layered Torte with Pistachio Cappuccino Ice Cream will also be available prior to the mead tasting. Feb. 15: Wednesday Folk Night. Bradford. Talented veteran acoustic guitar/vocal duo. 8:00 PM. Feb. 16: Health Science Pub. Our wildly popular Science Pub Series has returned for a fifth incredible season and has grown in scope and periodically includes presentations from the various health research groups at the University of Regina! Enjoy lectures on scientific topics of general interest in our Arizona Room (main floor banquet room) over beer and snacks. The room opens at 5:00 PM and quite often is full by 6:00 PM. Avoid disappointment and come down early for dinner and a pint before the presentation which begins at 7:00 PM. This month's lecture will be presented by Jann Ticknor from the All Nations Hope Network will speak on HIV/AIDs from the social and indigenous perspective. 7:00 PM. Feb. 18 - 19: Regina Art Collective - Second Annual "PAINTING, POTTERY & A PINT" ART SHOW and SALE in support of the Regina Humane Society.  The Regina Art Collective is a group of dedicated and talented artists who feel that as a group, they can better benefit the art community. They will be having their second annual art show and sale in the Bushwakker Arizona Room. It will include a variety of original paintings, photography, polymer clay, sculptural pieces, ceramics, pottery and mixed media. Opening day is Saturday, February 18 from 11 AM to 7 PM. The show continues on Sunday, February 19 from noon to 6 PM. Feb. 20: Closed for the Family Day holiday. Feb. 22: Wednesday Night Folk. Mabaleka. Modern country-folk duo from Saskatoon returns for an encore performance. 8:00 PM. Feb. 27: Monday Night Jazz & Blues MID-WINTER BLUES FESTIVAL EDITION. Christie-Anne Blondeau. This powerful vocalist kicks off the 2017 festival in fine form. 8:00 PM.

With the new stadium ready for action, Regina is now shifting focus to the railyard renewal project By Katherine Hill, Video Journalist There’s something new coming to Regina’s Warehouse District. With the new Mosaic Stadium ready to host the Roughriders next summer, focus has shifted to the Railyard Renewal Project. “Right now it’s just a barren piece of land,” said Regina Mayor Michael Fougere. “It needs some tender love and care.” After open meetings to hear feedback on the project, it’s moving into its second phase. “It will add a huge vibrancy to the area,” said Sandy Doran, executive director of the Warehouse Business Improvement District. “Everyone thinks the Warehouse District stops at Dewdney, but actually it stops at the railroad.” The City of Regina says there are plans for residential properties, new businesses and park land in the 17.5 acres south of Dewdney Avenue. “It’s just been a long time coming,” said Grant Frew, manager of Bushwakker Brewpub. “Everyone is really excited about it.” The plans will open access between the Warehouse District and Regina’s downtown. “We’re looking for it to be sort of a mixed-use area,” Doran said. “(It) will bring traffic into the area on every day of the week.” “Any sort of link that can be created between the old Warehouse District and downtown is going to be positive for both districts,” Frew added. There aren’t any building plans in place yet, but they will stay true to the esthetics of the district. “The city is taking care to ensure that it reflects the area,” Doran said.

By Jason Foster, On Beer.org Last Friday I decided to focus my attention in my CBC column on something that might, just might, become a thing in Alberta in 2017. Namely that the oil province may pick up on an international trend that has, so far, mostly eluded Canada. I speak of Gypsy Brewers. Or at least that is the common name. I struggle a bit with the cultural insensitivity of the label – the Roma (the group to which we normally apply the term) have long faced discrimination and stereotypes in Europe for their nomadic lifestyle. The term “gypped” is a derogatory reference to the Roma. The term “Itinerant Brewer” would be more appropriate. Alas, the term gypsy brewer has stuck. In short an itinerant brewer is a brewer who, rather than build their own brewery, arranges to have their beer brewed at a variety of breweries around the region, or even the globe. They avoid all the upfront capital and sunk costs of operating a brewery and, therefore, be more experimental and edgy. Itinerant brewers are a sub-set of contracting brewing, a long tradition of paying another brewery to produce beer rather than constructing their own brewery (or while waiting for its construction). The difference is that contract brewers usually stick with a single brewery, while itinerant brewers intentionally move around. Itinerant brewers also usually eschew the idea of a bricks-and-mortar brewery as part of their business plan. Itinerant brewing has its origins – curiously – in Scandinavia. The first and most famous itinerant brewers come from that region. Danish brewer Mikkeller would be the highest profile, but there is also To Øl and Sweden’s Omnipollo. The trend has spread to the U.S. with noted itinerant brewers Evil Twin (interesting owned by the twin brother of Mikkeller’s owner), Pretty Things and Stillwater. Western Canada has not been a region available for an itinerant brewer. There simply have not been enough breweries operating with sufficient capacity to accommodate such a business model. There have been contract brewers from time to time, but the model employed has been more a temporary arrangement while building their own brewery. We simply lacked the infrastructure to accommodate such a model. Plus Canada’s range of complex provincial beer production laws make travelling to breweries across provinces notoriously difficult. READ MORE 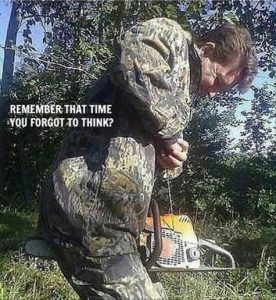 A man walks into a bar, he sees two pieces of meat hanging from the ceiling. He asks the barman, "Why are those two pieces of meat hanging from the ceiling?" The barman replies, "It's a competition which we run every night. If you can jump up and touch the meat, you get free drinks for the whole night." "Great!" says the man, "but what if I can't reach them?" "Then you have to buy all the drinks for everyone all night," the barman answers. "Do you want to try?" "No, but thanks anyway." "Why not?", asks the barman. "The steaks are too high."