New Hours of Operation. Commencing on Monday, January 16 we will be closing one hour earlier. Monday to Thursday hours will be 11:00 AM to midnight and Friday and Saturday hours will be 11:00 AM to 1:00 AM. Sunday hours will remain unchanged at 12:00 PM to 9:00 PM. Our premium red wine for January is Brazos de Los Andes Red from Argentina. $7.95 for a glass and $21.95 for a half litre. The white is Smoky Bay Pinot Grigio from Australia. $6.95 for a glass and $17.95 for a half litre. Our guest tap is currently pouring a brand new single malt offering from Black Bridge Brewing in Swift Current, their UNO IPA. An unfiltered, single malt IPA incorporating only single source ESB malt. Medium-bodied malty backbone balanced with a generous amount of Mosaic, Citra, Chinook and El Dorado hops. $7.95 for a pint. Following that we have a Rum Barrel Aged Chocolate Orange Porter from the Prairie Sun Brewery in Saskatoon. Regina’s Pile O’ Bones Brewing Company will then make their Bushwakker debut with a White IPA. Our Cheryl’s Blonde Ale is available for growler fills at the Quance Street SLGA store in Regina for the month of January. Three other new Saskatchewan brewed beers are also available. Be sure to support this SLGA pilot program and help grow Saskatchewan craft beer. Bushwakker Prime Rib Weekends. Back for a limited time! Our melt-in-your-mouth, low-and-slow roasted prime rib dinners with jumbo Yorkshire pudding have returned. And Sunday dinners just got a whole lot better at the Bushwakker! Choose from either an 8 oz. or a 10 oz. cut. Prime rib is definitely one of Bushwakker executive chef Mike’s specialties. The Bushwakker is now OPEN ON SUNDAYS from Noon to Nine. Enjoy our Sunday New York Steak & a Pint feature. 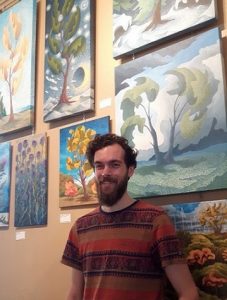 Eli is an artist who currently resides in Regina. He has experimented with acrylics since first being exposed to the medium in high school.  While attaining history and geography degrees at the University of Regina, his attention shifted toward digital illustration - creating maps for numerous projects. He would later use these skills to produce graphics for Noddingham, a clothing line that he and friends Jordan and Riley Sisco endeavored upon.  A tour of Europe in 2014 served to bring his creative focus back to painting. He was inspired by the historic architecture, numerous art galleries and the cultural vibrancy he experienced while abroad.  Fuelled by a newfound perspective, he dove into his work with renewed energy and has since developed his abilities in acrylics significantly.  In this series of paintings he explores various planar interpretations of trees, emphasizing rhythm and movement. He draws inspiration from summers spent sailing on Lake Diefenbaker, its clear waters set amid natural prairie and living skies are a soothing departure from city life.  Out on the water an awareness of the wind is essential; realizing its form and the way it breathes life into sails allows you the freedom to access any part of the lake.  For him, this has ingrained a fascination with the wind’s interaction with natural elements such as trees, grasses, sand and water, which come alive with the subtlest breeze.  Depicted prominently as though dancing figures, these paintings portray trees as they twist and move with the wind and in this way the artist seeks to provide insight into his experience of these simple pleasures.

Jan. 16: Monday Night Jazz & Blues. The Jazz Band-Its. A very big band plays big band jazz and swing. 8:00 PM. Jan. 18: Wednesday Night Folk. Billy & Karen. Veteran Regina bluesman, Billy Hughes is joined by Karen Runge for an evening of acoustic blues, country and folk rock. 8:00 PM (New start time). Jan. 19: Science Pub edition #38. A Short History of Math Formulas Engraved on Granite. Our wildly popular Science Pub Series is back for the second half of a fifth incredible season! Enjoy lectures on scientific topics of general interest in our Arizona Room (main floor banquet room) over beer and snacks. The room opens at 5:00 PM and quite often is full by 6:00 PM. Avoid disappointment and come down early for dinner and a pint before the presentation which begins at 7:00 PM. This month's lecture will be presented by Presented by Dr. Edward Doolittle from the First Nations University of Canada at The University of Regina. On occasion, mathematicians will ditch their pens and pencils, and turn to more serious writing implements like pocket knives and chisels. We shall investigate a number of such turns of events, beginning with Archimedes, who decided that the usual charred stick was not good enough for his greatest discovery, through Gauss, who began planning his tombstone at the age of eighteen, to modern times, when a number of formulas were engraved into the rock faces of the Research and Innovation Centre at the University of Regina.7:00 PM. Jan 21: Bushwakker 26th/Robert Burns 258th Birthday Bash. Join us as we celebrate over a quarter century of award-winning beer and pub cuisine and Scotland’s favourite son, Robbie Burns. Live rollicking reels with The Tilted Kilts and The Regina Police Services Pipes & Drums, highland dancing, FREE haggis, neeps and birthday cake, the tapping of the Scottish birthday firkin plus Burns poetry and historical overview from Saskatchewan author and playwright, Ken Mitchell. Bushwakker trivia quiz and prizes to be won too! A great way to shake those January blahs. The dance floor will be open! $5 cover charge goes into effect at 5:00 PM and the event begins at 6:00 PM. 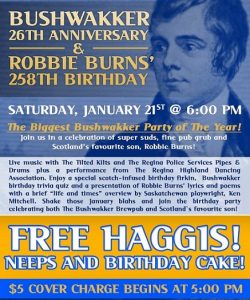 How To Make 2017 Your Best Beer Year Yet

the Pint - staff writers Happy New Year, folks! Hope you rung it in deliciously. As we careen into 2017 we want to lay out a roadmap of your best beer year yet. Are you with us?  2016 saw record sales of craft beer amid a flurry of openings, acquisitions, and more than a few tempests in the social media brewpot. The really big news? We now have over 5,000 breweries in the U.S., far surpassing the historical high water mark of 4,131 in 1873. But here’s why we think 5,000 breweries is just the beginning: in 1873 the U.S. population was roughly 38 million; today it’s about eight times greater—320 million. And according to the national restaurant association there are over a million restaurants in the U.S. So with that in mind, if you ask us, even 10,000 breweries doesn’t sound so high. While a lot of regional production breweries will continue to sell out to Big Beer, many hundreds more will open up in Small Town, USA. And how to make the coming year your best yet? Here’s five ways to make it count. Try a New Style IPAs in all their variations dominated in 2016, and will be continue to everywhere this year, but food-friendly farmhouse styles like saison, along with craft brewed golden ales and pale lagers and pilsners, rye beers, and stouts are very much in the ascendant. (Barleywines declined an astonishing 41% in 2016, but don’t count those big dogs out too soon.) Seek out a new beer style and try pairing it with food. Travel to a Beer Blessed Place Portland, OR continues to be the top destination worldwide for breweries (100 and counting, plus another 100+ a short drive outside the city), but now every region of the U.S. has a burgeoning craft beer scene. The best way to expand your horizons is to pick a city you’ve never been to and delve in. Base your visit around a festival to get the most bang for your buck. Ten to try: Austin, TX; Asheville; Portland, Maine; Tampa, FL; Fort Collins, CO.; Grand Rapids, MI; Bend, OR; Seattle, WA; Denver, CO; San Diego, CA. There are 500 such destinations described in our editor’s award-winning book, The Great American Ale Trail (2016). Brew It Yourself The ultimate way to truly learn about beer is to make some yourself at home. Homebrew shops tend to offer free or inexpensive classes and demos, and participation in homebrewing is at an all-time high, so plenty of people around you have the gear (ask your friends on Facebook or try Craigslist for people unloading their entire setups). Just get going and do it and skim the easiest chapters, jumping for the more challenging recipes. Results will vary, but this is how you learn and improve. Don’t give up if your first batch tastes like a kimchee-filled donut. Read Up What was once the loneliest shelf in the bookstore is now an entire section as the culture of beer expands. Talented journalists and authors are continuing to explore brewing and beer, and there are now scores of worthy titles, even a memoir or two. Relatedly, subscribe to a good beer magazine like DRAFT, Craft Beer & Brewing, Beer Advocate, or All About Beer. Fly Some Bottle Rockets The rise of modern bottleshops means you can go to a single place and explore literally hundreds — if not thousands — of beers (and don’t be afraid of craft beer in cans). For as little as $3 you might find the best beer you’ve ever tasted. Talk to the staffers whose job it is to stock and sell all this beer. You’ll be amazed at how much they know. Many have draft beer on as well, and you can fill up a growler of the latest beer during a new brewery’s tap takeover. Bang: you’re now part of the zeitgeist of beer.

Friends – please be careful. A couple weeks ago I went to a New Year’s Eve party. I had a few beers, followed by a few cocktails, followed by a few shots. I still had the sense to know that I was over the limit. That’s when I decided to do what I have never done before: I took a cab home. Sure enough, there was a police road block on the way home, and since it was a cab, they waved it past. I arrived home safely without incident. This was both a great relief and a surprise because I had never driven a cab before. I don’t even know where I got it from and, now that it is in my garage, I don’t know what to do with it.