Our premium red wine for December is The Grinder Pinotage from South Africa; $8.95 for a glass and $23.95 for a half litre. The white is Bree Riesling from Germany; $8.50 for a glass and $22.95 for a half litre. Our guest tap is currently pouring the Paddock Wood Brewing Loki Imperial IPA brewed in Saskatoon. $8.95 for a pint. Next up is a barrel-aged Imperial Stout from Nokomis Craft Ales located in Nokomis, Saskatchewan. Last Minute Gift Ideas for the Bushwakker Enthusiast on Your List! Holiday Special Price on Bushwakker/Joe Fafard 25th Anniversary t-shirts only $20 including tax, Bushwakker 2016 “A Friend With Mead is a Friend Indeed” Blackberry Mead t-shirts, Growler Gift Boxes include your choice of a glass or stainless steel Bushwakker/Joe Fafard growler, two branded pint glasses and a gift certificate redeemable for a growler fill, or you just can’t go wrong with a Bushwakker gift card! Reservations are now coming in for our Bushwakker 25th Anniversary final celebration, Nothing For New Year’s! Reserve now to avoid disappointment. Our Sodbuster Brown Ale will be available for growler fills at the Quance Street SLGA store in Regina for the month of December. Three other new Saskatchewan brewed beers are also available. Be sure to support this SLGA pilot program and help grow Saskatchewan craft beer. Bushwakker Prime Rib Weekends Return. Back by popular demand! Our melt-in-your-mouth, low-and-slow roasted prime rib dinners with jumbo Yorkshire pudding have returned. And Sunday dinners just got a whole lot better at the Bushwakker! Choose from either an 8 oz. or a 10 oz. cut. Prime rib is definitely one of Bushwakker executive chef Mike’s specialties. The Bushwakker is now OPEN ON SUNDAYS from Noon to Nine. Enjoy our Sunday New York Steak & a Pint feature.

Dec. 24: CHRISTMAS EVE. Open at 11:00 AM and closed at 5:00 PM. Dec. 25. CLOSED. Merry Christmas! Dec. 26: Monday Night Jazz & Blues Boxing Day Bash with CALL ME MILDY. Blues harpist and guitarman Greg Mildenberger leads this rockin’ blues act. 8:00 PM. Dec. 28: Wednesday Night Folk. BILLARNEY. Very large acoustic Celtic act returns. 9:00 PM. Dec. 31: NOTHING FOR NEW YEAR’S – BUSHWAKKER 25TH ANNIVERSARY EDITION. As we bring our quarter century anniversary celebrations to a close, we decided to take our very popular Nothing For New Year’s event…and do even less than ever! No band, no dancing, no tickets, no cover charge, no line-ups, no noisemakers, no elevated drink prices, no free cheap champagne, no midnight buffet, no dressed-up staff, no smooching at midnight, no Auld Lang’s Syne, no decorations and no special meal – but we will have our regular weekend Prime Rib & Jumbo Yorkie dinner feature. And if you want to make a reservation…No Problem! We wish you good health, happiness and a prosperous 2017! 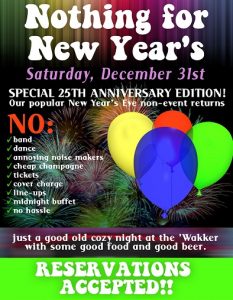 2016 Craft Beer Year in Review from the Brewers Association - A Big Year for Small Beer!

Abby Berman Cohen Reflecting on the significant impact of small and independent craft breweries in 2016, the Brewers Association—the not-for-profit trade association dedicated to small and independent American brewers—looked back on the defining beer moments of 2016. “In the face of numerous opportunities and challenges in 2016, small and independent craft brewers continue to thrive,” said Bart Watson, chief economist, Brewers Association. “This community should be very proud of what it has accomplished and how far it has come.” Of note in 2016: Brewery Count: Five thousand strong and growing, there are now 5,005 breweries in the U.S. compared to 10,000 wineries. Almost all (99%) are small and independent craft brewers. Continued Growth for the Segment: By mid-year, small and independent breweries grew by eight percent, reflecting dynamism and a bright spot for the domestic beer market. Never Go Out of Styles: IPAs continue to hop up, now accounting for roughly one-quarter of craft volume. More sessionable styles, including golden ales, pilseners and pale lagers, are up 33 percent, totaling nearly five percent of craft. Freedom of Choice: As the world’s two largest brewers merged into a multinational conglomerate two and a half times the size of the U.S. beer market, the BA was at the center of the discussion, advocating for fair competition for the nation’s small and independent craft brewers and access to market ensuring beer enthusiasts get to continue to choose from a vast variety of options. Approximately 65 percent of craft beer lovers said they are drinking more craft specifically because it offers more variety. Homebrewing Impact: The National Homebrew Competition continues to be the world’s largest beer competition with 7,962 entries. A recent measurement of homebrewing found that its 1.2 million participants created over 11,000 jobs, resulting in more than $1 billion in spending and over $700 million in revenues. Beer Destinations: Recognizing a rising interest in beer tourism, Travelocity enlisted the expertise of the BA to find the country’s best beer destinations and create the very first Beer Tourism Index. Additionally, the American Homebrewers Association (AHA)—the leading community for homebrewers—unveiled a list of cities across the U.S. where homebrewing is on the rise. American Craft Beer Abounds Abroad: Craft beer export volume increased by 16.3 percent, totaling 446,151 barrels and worth $116 million. More than 100 small and independent craft brewers export their beer internationally, spreading the culture and community of craft beer and a growing recognition and for American brewers. Bipartisan Beer Support: With a craft brewery in nearly every congressional district in the country, more than half of the U.S. Congress now supports the Craft Beverage Modernization and Tax Reform Act. The BA has been a key player in moving forward this bipartisan legislation that seeks to recalibrate the current federal excise tax structure for the nation’s brewers and reform burdensome laws regulating America’s brewing industry. History Has Its Eyes on Beer: With support from the Brewers Association, the Smithsonian’s National Museum of American History announced that it will launch a three-year initiative to collect, document and preserve the history of brewing, craft brewers and the beer industry in America. The job posting for a Historian to study brewing history was one of the most viral beer stories of the year, an indicator of how much people care about this vital industry. Perfect Pair: Beer and food continue to find harmony on plates and palates. Seventy-three percent of craft beer purchasers gave “complements my meal” as a very or somewhat important selection criteria in their beer choice when dining out. Sixty-three percent select beer based on the food item or meal they are planning to enjoy. “This has been an exponentially exciting year as the beer community continues to grow and evolve. It is incredible to watch local brewers innovate and validate the new way the world views the U.S. beer scene,” said Julia Herz, craft beer program director, Brewers Association. “Much of the dialogue in 2016 centered around the craft brewer definition, who qualifies as a small and independent brewer, what independence means to beer lovers, beer quality and beer appreciation. We will renew our efforts in 2017 on behalf of our members and the beer drinkers around the world and continue to advance the amazing beverage of beer.” 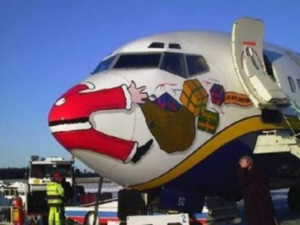 This is something that happened at an assisted living centre. The people who lived there have small apartments but they all eat at a central cafeteria. One morning one of the residents didn't show up for breakfast so my wife went upstairs and knocked on his door to see if everything was OK. She could hear him through the door and he said that he was running late and would be down shortly so she went back to the dining area. An hour later he still hadn't arrived so she went back up towards his room and she found him on the stairs. He was coming down the stairs but was having a hell of time. He had a death grip on the hand rail and seemed to have trouble getting his legs to work right. She told him she was going to call an ambulance but he told her no, he wasn't in any pain and just wanted to have his breakfast. So she helped him the rest of the way down the stairs and he had his breakfast. When he tried to return to his room he was completely unable to get up even the first step so they called an ambulance for him. A couple hours later she called the hospital to see how he was doing. The receptionist there said he was fine, he just had both of his legs in one leg of his boxer shorts.