Our premium red wine for December is The Grinder Pinotage from South Africa; $8.95 for a glass and $23.95 for a half litre. The white is Bree Riesling from Germany; $8.50 for a glass and $22.95 for a half litre. Our guest tap is currently pouring the Sundog Belgian Whit from the Churchill Brewing Company in Saskatoon, making its Bushwakker debut. $7.95 for a pint. Next up is the Paddock Wood Heartstopper Hot Chocolate Stout. A rich chocolate stout with medium bitterness and a sweet finish with a hint of cayenne. A big “thank-you” to everyone who came out for our annual “Missiletow” Christmas Ale Release on Saturday, December 10th.  All 250 bottles sold out in less than an hour. We will offer this rich and malty English-style barleywine on tap all holiday season. Bushwakker Gift Ideas for the Craft Beer Enthusiast on Your List. We still have a few “A Friend With Mead is a Friend Indeed” Blackberry Mead t-shirts left. We also have a few Bushwakker/Joe Fafard 25th Anniversary t-shirts available for only $20 including tax. Growler gift boxes include your choice of a glass or stainless steel Bushwakker Joe Fafard growler, two pint glasses and a gift certificate redeemable for a growler fill. Our Christmas Variety Six-Pack includes some of our seasonal and specialty offerings including bottles of Blackberry Mead and, as of Monday, Missiletow Christmas Ale, or you can’t go wrong with a Bushwakker gift card! Our Sodbuster Brown Ale is available for growler fills at the Quance Street SLGA store in Regina for the month of December. Three other Saskatchewan brewed beers are also available. Be sure to support this SLGA pilot program and help grow Saskatchewan craft beer. If successful, more SLGA stores may also offer growler fills in the future! Bushwakker Prime Rib Weekends Return. Back by popular demand! Our melt-in-your-mouth, low-and-slow roasted prime rib dinners with jumbo Yorkshire pudding have returned. And Sunday dinners just got a whole lot better at the Bushwakker! Choose from either an 8 oz. or a 10 oz. cut. Prime rib is definitely one of Bushwakker executive chef Mike’s specialties. The Bushwakker is now OPEN ON SUNDAYS from Noon to Nine. Enjoy our Sunday New York Steak & a Pint feature. Our Bushwakker Local Artists Wall for the month of December features the work of Quin Greig. Her bio is as follows: Quin C. Greig was born in Swan River, Manitoba in 1988. Raised on a remote acreage, Quin spent much of her childhood among animals and nature playing solitary “games of imagination.” Her relatively isolated formative years would have a profound effect on her personality, creativity, and the subject matter of her artwork. Quin received her Bachelor of Fine Arts with distinction from the University of Regina in 2013 and is now a practicing interdisciplinary artist. Experienced in oil painting, intaglio printmaking and sculpture, Quin specializes in watercolor drawings. While interested in mysticism and the occult - She is simultaneously, and just as importantly, influenced by the people and symbols that surround her in her daily life. Through her work, Quin represents the ways in which she feels she has encountered magic, synchronicity, and archetypes from the Jungian “collective unconscious” in her own unfolding narrative. In this series entitled "Soul Food," Quin explores the potent symbolism of a variety of culinary items - employing them as metaphor for psychological and spiritual subject matter. Quin has spent years refining her signature style of line work, and has been commissioned for several label and tattoo designs - as well as myriad other projects for private individuals. Quin currently divides her time between her home studio and The Bushwakker Brewing Company where she has worked as a server since 2011. 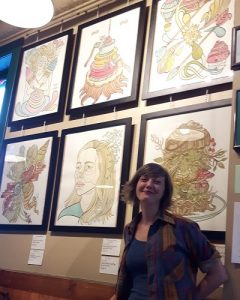 Dec. 19: Monday Night Jazz & Blues. TERRAPLANE. Regina’s friendliest bluesman, Shane Reoch, leads this popular family blues band. 8:00 PM. Dec. 21: Wednesday Night Folk. THE DICKENS YULETIDE SINGERS. Join us at 8:00 PM for this one hour Christmas Concert delivered by this talented group in Victorian dress. 8:00 PM. Dec. 24: CHRISTMAS EVE. Open at 11:00 AM and closed at 5:00 PM. Dec. 25. CLOSED. Merry Christmas! Dec. 26: Monday Night Jazz & Blues Boxing Day Bash with CALL ME MILDY. Blues harpist and guitarman Greg Mildenberger leads this rockin’ blues act. 8:00 PM. Dec. 28: Wednesday Night Folk. BILLARNEY. Very large acoustic Celtic act returns. 9:00 PM. Dec. 31: NOTHING FOR NEW YEAR’S – BUSHWAKKER 25TH ANNIVERSARY EDITION. As we bring our quarter century anniversary celebrations to a close, we decided to take our very popular Nothing For New Year’s event…and do even less than ever! No band, no dancing, no tickets, no cover charge, no line-ups, no noisemakers, no elevated drink prices, no free cheap champagne, no midnight buffet, no dressed-up staff, no smooching at midnight, no Auld Lang’s Syne, no decorations and no special meal – but we will have our regular weekend Prime Rib & Jumbo Yorkie dinner feature. And if you want to make a reservation…No Problem! We wish you good health, happiness and a prosperous 2017! 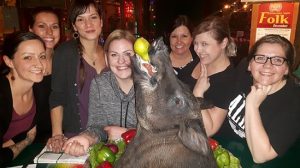 The Regina Male Voice Choir presented their annual Christmas Concert at Bushwakker earlier this month. The highlight of the evening is the singing of The Boar’s Head Carol. A huge stuffed boar’s head is paraded throughout the pub while the carol is sung.

10. Go to your local supermarket. Take with you the nearest thing you can find to a pre-school child -- a fully grown goat is excellent. If you intend to have more than one child, take more than one goat. Buy your week's groceries without letting the goats out of your sight. Pay for everything the goats eat or destroy. Until you can easily accomplish this do not even contemplate having children. 11. Hollow out a melon. Make a small hole in the side. Suspend it from the ceiling and swing it from side to side. Now get a bowl of soggy Fruit Loops and attempt to spoon it into the swaying melon by pretending to be an airplane. Continue until half of the Fruit Loops are gone. Tip the rest into your lap, making sure that a lot of it falls on the floor. You are now ready to feed a 12-month old baby. 12. Learn the names of every character from Barney and Friends, Sesame Street and Teenage Mutant Ninja Turtles. When you find yourself singing "I love you, you love me," at work, now you finally qualify as a parent!