Our premium wines for November are from the Durbanville Hills Winery in South Africa. The red is a Shiraz and the white is a Sauvignon Blanc; both are $7.95 for a glass and $21.95 for a half litre. Our guest tap is currently pouring the Black Bridge Smoked Porter. Next up is the Galaxy SMaSH (Single Malt and Single Hop) IPA from Nokomis Craft Ales. 2016 Bushwakker Blackberry Mead King/Queen Bee Contest – Eat & Drink Like Royalty, 25th Anniversary Limited Edition Mead and Friends with Mead are Friends Indeed! A true Saskatchewan phenomenon! Last year our entire Blackberry Mead offsale inventory of over 6000 bottles sold out in less than two hours. A new record was set when the devoted mead enthusiasts braved a Saskatchewan winter night and began forming a line 15 HOURS before it went on sale – yes, 7:00 PM on the Friday night! The line-up stretched half a city block by 9:00 AM. It was just like a tailgate party! Experienced mead lovers came prepared with ice fishing huts and propane heaters. Porta potties will once again be in place and we will be serving hot chocolate to all those waiting in line as well as conducting a mead trivia contest with prizes to be won. We have been brewing our Blackberry Mead all year long preparing for our annual kick off to the holiday season. 400 pounds of Lumsden Valley honey and 84 pounds of blackberries are in every batch. View the days remaining to Bushwakker Mead Day (#MEADDAY2016) on our countdown clock over our brewhouse door. Limited edition 2016 commemorative Bushwakker “A Friend with Mead is a Friend Indeed” t-shirts designed by local artist, Gavin de Lint, will be available. Enter our “Why I Love Blackberry Mead” Poetry Contest at https://www.bushwakker.com/mead2016 for a chance to be King or Queen Bee for a day and sit upon a huge throne on our stage wearing a royal purple crown and robe whilst being wined and dined for free! Our Canadian Brewing Awards gold medal-winning Regina Pale Ale is now available for growler fills at the Quance Street SLGA store in Regina for the month of November. Three other new Saskatchewan brewed beers are also available. Be sure to support this SLGA pilot program and help grow Saskatchewan craft beer. If successful, more SLGA stores may also offer growler fills in the future! The Bushwakker is now OPEN ON SUNDAYS from Noon to Nine. Enjoy our Sunday Steak & a Pint feature. Bushwakker Prime Rib Weekends Return. Back by popular demand! Our melt-in-your-mouth, low-and-slow roasted prime rib dinners with jumbo Yorkshire pudding have returned. And Sunday suppers just got a whole lot better at the Bushwakker! Choose from either an 8 oz. or a 10 oz. cut. Prime rib is definitely one of Bushwakker executive chef Mike’s specialties. The Bushwakker Local Arts Wall for the month of November features the works of Charlotte Hauk.  In 2012 I completed my Bachelor of Fine Arts in ceramics, while working at the North Central Community Association teaching art to disabled adults and later to run a Mural Project. After graduation I worked with the North Central Community Association where we received the Explorations Grant (from the Sask. Arts Board) to research the needs and wants of youth within art and culture. For this research I used Participatory Action Research, where I ran pilot art projects and events, while developing and using a survey for the youth to assess their experience and interest in arts and cultural programing. I later moved to work with the Prairie Central District as their Arts and Cultural Coordinator, where I again supported and promoted arts and cultural programing and events. I also developed a survey to assess the programs and services within the District. I currently teach art with the Create program with the Regina Public School Board, ceramics and kids classes at the Conservatory and Cathedral Arts School. I am intuitively drawn to organic plant shapes and forms. Sometimes I envision the forms in my mind first, other times I am drawn to the plant form or shape. I then start to draw the plant form, noticing and following lines, forms and shapes as I see them.  The simple shape evolves into abstract formations as I see other natural forms; birds or plants evolve from them. The forms sometimes work in series, one evolving from another. The drawings flow easily and effortlessly from my unconscious. They are symbolic of my life, myself and experiences. The natural abstract plant forms are a meditative experience, and speak for themselves. I then transfer forms into acrylic paintings letting them evolve and speak to me as I add paint. I let the process of blending and layering paint guide me to until I feel the painting is completed. The process of art and how it is a meditative experience intrigues me. 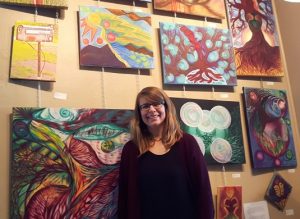 Nov. 21: Monday Night Jazz & Blues. JEFF MERTICK & JASON FISKE.  Veteran bluesman returns to deliver an acoustic blues performance with Mr. Fiske. 8:00 PM. Nov. 23: Wednesday Night Folk. THE HUMDINGERS.  Recently awarded the title of “Saskatchewan's Saddest Band” for the second year in a row. 9:00 PM. Nov. 26: THE 28TH BUSHWAKKER SINGLE MALT SCOTCH TASTING. One of our most popular events of the year returns! This year’s offerings include: Talisker 25 year, Speyburn Sherry Cask 8 year, Caol Ila Young and Feisty, Glenturret 2001, Wolfburn and Glendronach Peated. A performance from the Regina Police Pipes & Drums and the Regina Highland Dancing Association adds definite Scottish flare to this event.  SOLD OUT. Nov. 28: Monday Night Jazz & Blues. THE JAZZ BAND-ITS. Enjoy big band, jazz and swing with the largest band to ever grace the Bushwakker stage. 8:00 PM. Nov. 30: Wednesday Night Folk. RYAN HICKS. Folk and pop from this veteran Regina singer/songwriter. 9:00 PM. Dec. 2: First Firkin Friday. Enjoy this longstanding Bushwakker monthly tradition where a piper from the Regina Police Pipes and Drums parades a small keg of special beer throughout the brewpub in a procession. The firkin is then tapped by a volunteer often delivering a beer shower to all onlookers in the immediate proximity. Our December firkin will be a special black spiced rum – infused Missiletow Christmas Ale! 5:30 PM. Dec. 3: 2016 Annual Bushwakker Blackberry Mead Release. Last year the line-up began to form 15 hours before our mead went on sale. Over 600 bottles sold out in less than two hours. Limited edition Bushwakker 25th anniversary commemorative mead bottles available to the first 80 customers in line. Enter our “Why I Love Blackberry Mead” Poetry Contest for a chance to be crowned Queen or King Bee. 11:00 AM. Dec. 5: Monday Night Jazz & Blues. ‘ROUND MIDNIGHT. Veteran Regina jazz acts plays popular jazz tunes. 8:00 PM. Dec. 7: Wednesday Night Folk. THE REGINA MALE VOICE CHOIR. Get into the holiday spirit with this one hour concert featuring Canada’s longest continuously performing male voice choir. The singing of the Boar’s Head Carol whilst a massive boar’s head is paraded throughout the pub is the highlight of the evening. Note the 8:00 PM earlier start time.

Amanda Stephenson, Calgary Herald An Alberta Court has Sided with Two Out-of-Province Breweries and Granted an Injunction Against Alberta’s New Beer Markup Policy. Ontario-based Steam Whistle Brewing and Saskatchewan’s Great Western Brewing Company have both alleged the new rules announced by the Alberta government in August are unconstitutional, in that they build barriers against craft brewers from outside the province. Under the new system, the markup rate for all beer sold in Alberta is $1.25 a litre, regardless of where it is made. (Previously, Alberta brewers got a break on the markup rate, as did brewers in B.C. and Saskatchewan which are part of the free trade New West Partnership Agreement). However, while all brewers now pay the same mark-up rate, Alberta brewers who produce less than 30 million litres per year get at least some of the money back, through a grant program exclusively targeted to brewers with brewing operations and jobs in this province. It is that grant program that has attracted the ire of out-of-province brewers, who say they are now less competitive in the Alberta market. “We are very pleased by the court’s judgment, as this decision will enable us to continue our efforts to encourage freedom, competition, and fairness in the marketplace,” said Great Western CEO Michael Micovcin in a statement. “Steam Whistle took on this crusade with the intention to make beer tax policy fair and equitable in all jurisdictions across the country,” said Steam Whistle Brewing co-founder Greg Taylor in a statement. “We applaud Saskatchewan’s leadership with its recent introduction  of  a new graduated craft beer tax program open to any brewer, regardless of origin.” The Alberta government has previously said it does not believe the new markup system violates the terms of any interprovincial trade agreements since it does not restrict any brewer from selling beer in the province. Defenders of the new system have also pointed out Alberta brewers face barriers in other provinces, where government-controlled liquor stores encourage the promotion and sale of local products above others. Finance Minister Joe Ceci declined to comment on the court proceedings Thursday, but in an emailed statement he said the government remains very proud of the jobs and opportunities the change to its beer policy is bringing to Alberta entrepreneurs. “Alberta continues to have the most trade-compliant policy in Canada and the most open liquor market with more than 7,000 beer products currently listed,” Ceci said. 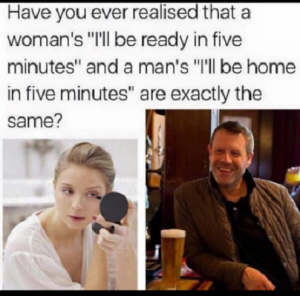 Man: An animal whose chief occupation is extermination of other animals and his own species, which, however, multiplies with such insistent rapidity as to infest the whole habitable earth and Canada."  ---Ambrose Bierce (1842-disappearance in 1914) Two men are out ice fishing at their favorite fishing hole, just fishing quietly and drinking beer.  Almost silently, so as not to scare the fish, Bob says, "I think I'm going to divorce my wife -- she hasn't spoken to me in over two months." Earl continues slowly sipping his beer. Then, thoughtfully says, "You better think it over -- women like that are hard to find."