Our premium wines for October are from Argentina. The red is Crios Malbec; $8.95 for a glass and $24.95 for a half litre. The white is Portillo Sauvignon Blanc; $7.95 for a glass and $22.95 for a half litre. Our guest tap is currently pouring a a limited release offering from the Prairie Sun Brewery in Saskatoon. Their Saison du Miel et Vin is a local wild flower honey-infused Saison refermented with champagne yeast and aged in a wine barrel. The result is a tart, champagne-like Saison. Next up is a special aged version of the Black Bridge Wee Heavy which has been safely aged in our beer cellar for one year. Bushwakker Prime Rib Weekends Return. Back by popular demand! Our melt-in-your-mouth, low-and-slow roasted prime rib dinners with jumbo Yorkshire pudding return this weekend. And Sunday suppers just got a whole lot better at the Bushwakker! Choose from either 8 oz. for $20.95 or 10 oz for $25.95. Prime rib is definitely one of Bushwakker executive chef Mike Monette’s specialties. Bushwakker Brewpub’s New Writer’s Corner Seeks Books! We are creating a Writer’s Corner and are seeking donations of recent publications (2014-2016 publication dates) from Regina and area authors (all genres) to help create a library within the Writer’s Corner. The goal is to start slowly and gradually increase the size of the library a couple of times each year. More book shelves will be installed as the number of books increases. The books in the corner library will be available for patrons interested in reading works by local authors and the books will remain in the brewpub. To be considered for the library, books must be a minimum of 40 pages and professionally bound. Please drop off a copy of your recently published book (along with purchasing information which can be shared with brewpub patrons) to Grant Frew at Bushwakker. You can email Grant at bar@bushwakker.com. Books will remain a part of the Bushwakker library. Rotating individual author biographies and a brief book synopsis will be featured in the brewpub’s weekly newsletter and social media channels on a regular basis. The Bushwakker is now OPEN ON SUNDAYS from Noon to Nine. Enjoy our Sunday Steak & a Pint feature. After a very successful debut at the Quance Street SLGA store in Regina, the Bushwakker Dungarvon Irish Red Ale has been replaced with our extremely popular Cheryl’s Blonde Ale. Three other new Saskatchewan brewed beers will also become available. Be sure to support this SLGA pilot program and help grow Saskatchewan craft beer. If successful, more SLGA stores may also offer growler fills in the future! Bushwakker 28th Single Malt Scotch Tasting Ticket Release Date. We have been receiving many inquiries as to when our November 26th scotch tasting tickets will go on sale. All six special order single malts have now arrived. We will release the 150 tickets on Sunday, October 30th at noon sharp! Tickets historically sell out in only a day or two! This year’s offerings are: Talisker 25 year, Speyburn Sherry Cask 8 year, Caol Ila Young and Feisty, Glenturret 2001, Wolfburn and Glendronach Peated. A performance from the Regina Police Pipes & Drums and the Regina Highland Dancing Association adds definite Scottish flare to this event. Tickets $84.95 each. 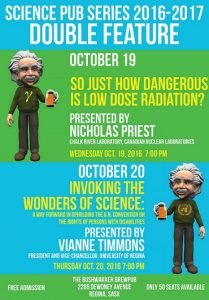 Oct. 19 – NIGHT ONE: NUCLEAR SCIENCE WEEK - SO JUST HOW DANGEROUS IS LOW DOSE RADIATION? Presented by Nicholas Priest from Chalk River Laboratory, Canadian Nuclear Laboratories. It is well established that the general public fears nuclear radiation and that it hugely overestimates the toxicity of what, in reality, is a rather weak carcinogen. Studies by the Royal Society and others have described this level of risk perception to be a function of two main factors: uncertainty concerning the effects of radiation, and dread of the consequences of irradiation (cancer and genetic damage). The situation is not helped by the radiological protection community that insists on using cancer mortality as its only outcome measure. This is so even though exposure to low dose radiation influences the prevalence of other diseases and that overall there is no convincing evidence of reduced life-span following the receipt of acute doses of external radiation up to 100 mGy. Moreover, at low doses the induction of adaptive responses to a stressor (radiation) may extend life. To change perceptions it is necessary both to address these factors and to explain why people are not similarly afraid of exposures to natural environmental and medical radiation. Sufficient evidence exists to allay the fear of radiation exposure, but the path forward to put to rest the apprehensions of the population is unclear. Oct. 20 – NIGHT TWO: INVOKING THE WONDERS OF SCIENCE: A Way Forward in Upholding the United Nations Convention on the Rights of Persons with Disabilities. Presented by Vianne Timmons, President and Vice-Chancellor, University of Regina. Since the Convention on the Rights of Persons with Disabilities was adopted by the United Nations in 2006, a great deal of effort has been spent – with varying degrees of success – at having the nations of the world sign and ratify it.  A decade on, however, it is time to shift focus from ratifying the Convention to meaningfully upholding it.  As we look for ways to make this shift, the application of science provides tremendous opportunities to help persons with disabilities participate and be viewed as full and equal members in a global society. Oct. 22: SASK VS. MONTREAL. Be sure to stop by The Bushwakker and join the Sea of Green before, during or after the game. Kickoff is at 2:00. Enjoy our gourmet Montreal Burger & a Pint special for only $17.95 and “devour” the competition! Oct. 24: Monday Night Jazz & Blues. ‘ROUND MIDNIGHT.  Veteran Regina act plays popular jazz tunes. 8:00 PM. Oct. 26: Wednesday Night Folk. LEXY & THE POWER TRIO FIVE. Bushwakker server/bartender, Lexy Desjarlais, struts her musical talents in an encore performance. 9:00 PM. Oct. 29: A CELTIC HALLOWE’EN. Win a $100 Bushwakker gift card in our costume contest, enjoy a pint of Great Pumpkin Spiced Brown Ale, devilishly delicious food specials and great live Celtic music with Regina’s most danceable Celtic band, The Tilted Kilts. $5 cover charge in effect. Band starts at 9:00 PM. Costume contest at 10:30 PM. Oct. 29: RIDERS VS BC. Kickoff is a 5:00 PM. Enjoy our gourmet BC Burger & a Pint special for only $17.95 and “devour” the competition. Head back to The Bushwakker for our Celtic Hallowe’en Party. Oct. 30: Single Malt Scotch Tasting Ticket Release Date. Tickets to our November 26th scotch event go on sale at noon. 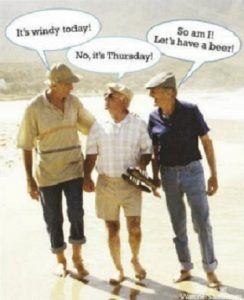 What ‘Selling Out’ Is Actually About

By Jacob McKean, Modern Times Beer Anheuser-Busch InBev is in the midst of a PR push, the goal of which is to soften resistance to their craft brewery acquisition strategy. Sadly, credulous beer writers aren't asking any of the right questions, so I feel a need to respond. The sacrificial lamb in this takedown is Aaron Goldfarb's recent piece for Serious Eats entitled, "What 'Selling Out' Allows a Craft Brewery to Do.” I'm picking this one because it covers most of the bases on this issue, which makes it convenient. I apologize to Aaron in advance because he’s sorta conscious of the fact that he's being manipulated,  but he simply doesn't know enough about the beer business to understand exactly  how. I don’t mean to  pick  on  him;  there  are plenty of other similarly problematic articles I could have chosen. Hell, when I was a freelancer, I would've gladly cooked up a story about how to construct a helicopter from discarded sex toys if someone had offered me twenty five cents a word to write it. But I’ve heard the misinformation in this piece repeated too many times to ignore, so here goes. I'll take the arguments one at a time: 1) Claim: Moving production of core brands from acquired breweries to ABI's plants improves their quality. Goldfarb says ABI's plants are being "retrofitted specifically to handle craft beer in ways that the craft breweries themselves simply couldn't afford back when they were independent operations. InBev's added a Super Sack system...hop backs...conical tanks, and more cellaring space.” Other items cited are a mash filter, centrifuge, and tasting room. Problem: None of the items listed are unaffordable to independent craft brewers and none of them are related to quality. Many craft brewers have Super Sack systems: they cost about $25,000 and do nothing to improve quality, although buying specialty malts in Super Sacks does reduce their cost slightly. Likewise, many craft breweries have hopbacks; I paid about $3,000 for mine. Most breweries don't bother with them, however, because it's generally understood they don't do a better job of imparting hop flavor and aroma than whirlpool additions. And "conical tanks"? What brewery doesn't have conical tanks? Literally every single brewery can afford conical tanks. What about "more cellaring space"? You mean, like, renting a building? Likewise, mash filters, centrifuges, and tasting rooms are all relatively common at mid-sized independent breweries. This is just a list of random words meant to give the appearance that the argument has substance. ABI is spinning minor logistical adjustments as proof of their commitment to quality. Anyone who has worked in a brewery can see that this is bullshit. Side note: Calling ABI "the best lager makers around" is like calling Kraft the best cheese makers around; allowing that statement from Blue Point’s president to go unquestioned is bizarre. 2) Claim: ABI is investing in the breweries themselves with the goal of improving quality, which they couldn't have done on their own. Goldfarb writes, "It gave 10 Barrel $10 million to buy six new 400-barrel tanks, for instance, and it's helping Blue Point open a new 40,000-square-foot facility housing brewing and packaging operations, a tasting room, and office space. Collectively, these improvements have led to the production of more consistent flagship beers for many of ABI's craft breweries." Problem: Anyone who has ever worked on the business side of brewing would immediately see the problem with the first part of this claim: 400 bbl tanks cost around $100,000 each, so six of them won’t add up to $10 million. Failing to notice the huge discrepancy between the dollar amount listed and the cost of the alleged purchase is indicative of the overall lack of industry knowledge throughout this piece and many others like it. READ MORE

1. "Princesses always pick up their toys after they're done playing". I've never met a princess, but something tells me they don't spend a lot of time cleaning up after themselves. 2. "No, I don't know where your art project went". Yes I do. I threw it away. Not to be mean, but because I have to. Seriously, buddy, you bring home five art projects a day from school. Our kitchen just isn't big enough for them all. 3. "Every time you flick the lights on and off, a fairy dies". Harsh? Sure. But do my kids constantly flick the lights on and off, anymore? No.